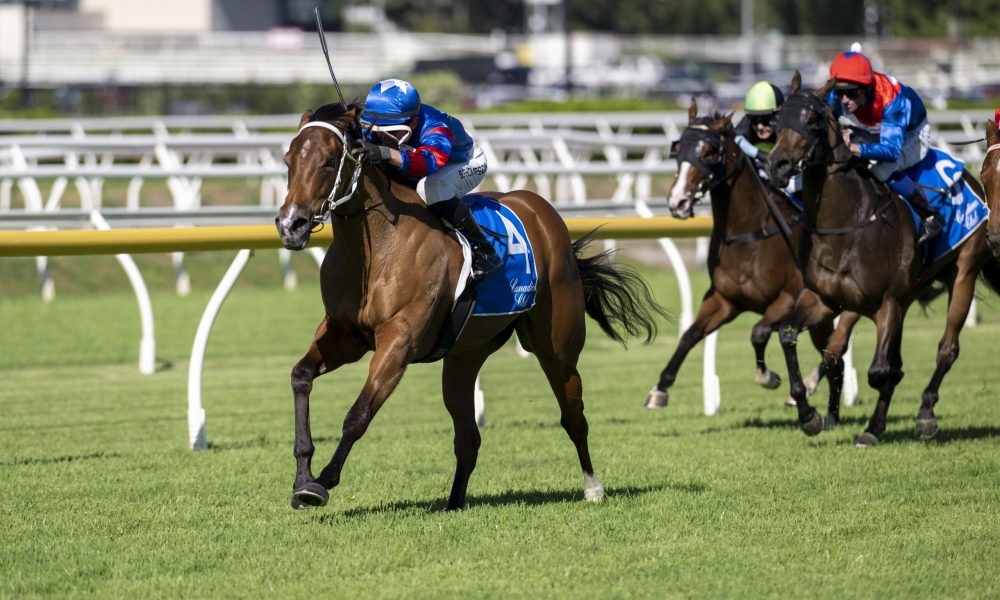 In Chinny Boom’s three race starts away from her home racecourse of Rockhampton she has been floated more than 3,300 kilometres, so her return road trip to Brisbane this week for the Mode Plate (Listed, 1200m) poses no problems for the unbeaten Central Queensland filly.

The Clinton Taylor-trained Spirit Of Boom (Sequalo) three-year-old, a winner of five from five and the subject of huge offers to buy the Mark Pascoe-bred and raced filly, will get her first crack at stakes level at Doomben on Saturday.

The $150,000 Mode Plate, a three-year-old fillies race, will be the culmination of a long-range plan set by young Rockhampton-based horseman Taylor, who started Chinny Boom’s preparation with an almost four-hour drive north to the Sugar City of Mackay in September.

She backed up her easy two-and-three-quarter-length first-up victory with an eight-and-a-quarter-length winning display in slick time at Rockhampton on October 4, before Taylor brought his star filly to the big smoke where she again accounted for her rivals at Eagle Farm on October 29.

The furthest Chinny Boom has raced over in her five starts is 1100 metres, at Mackay first-up, and Taylor concedes the 1200-metre distance is a query but he expects her to be up to the challenge this weekend.

“We have got to raise the bar again, but I think she deserves her chance, so we’re excited and looking forward to it,” Taylor said yesterday.

“I thought she was exceptionally strong through the line and her last 200 metres was the best part of the race (last start). The distance is definitely a question mark but it’s one she will answer on Saturday.”

Attaining black type with Chinny Boom is of utmost importance for Taylor and Chinchilla-based Pascoe, who retains the filly’s dam Imanoremiss (Made Of Gold), a yearling filly by Encryption (Lonhro) and an October-born filly by Queensland’s champion sire Spirit Of Boom.

“We turned down big offers for Chinny Boom and the owner is lucky enough that he has the mother and a couple of halves and full-sisters on the ground, so it’d be big for him if I can get black type with her,” Taylor said.

“The plan was for this race to be her grand final right from the time she came into work this time in.

“A few people probably thought I was aiming a bit high but I think it soon became a reality that we were on the right track.”

He added: “She arrived back here [in Brisbane] on Sunday and I am really happy with her. Everything’s gone to plan, she is as good as I’ve ever had her and she needs to be in that shape to go to a race like this.”

Long road trips to attend the races is nothing new for Taylor, the son of Sunshine Coast-based trainer Garnett Taylor, with regular trips up and down the Queensland coast, from Cairns in the north and Brisbane in the south, in the pursuit of winners.

So far this season, Taylor’s dedication has seen him train 21 winners with a further 31 placings from 72 starters at a winning strike rate of 29.2 per cent.

“We do it all the time and her record … and Chinny Boom’s been to Townsville, which is eight or nine hours from Rocky,” he said.

“Travel doesn’t bother her, she is really used to that. She’s won five from five, so she’s come to adapt to it and she’s travelled terrifically [to Brisbane], so we can’t use that as an excuse.”

“She’s a leggy, light filly but I think she looks better this time in Brisbane than last time,” he said.

“The trip down last time was a real learning curve for her and when she walked off the float on Sunday, her head was straight in the feed bin and licked it clean. The trip four or five weeks ago was of big benefit to her.”