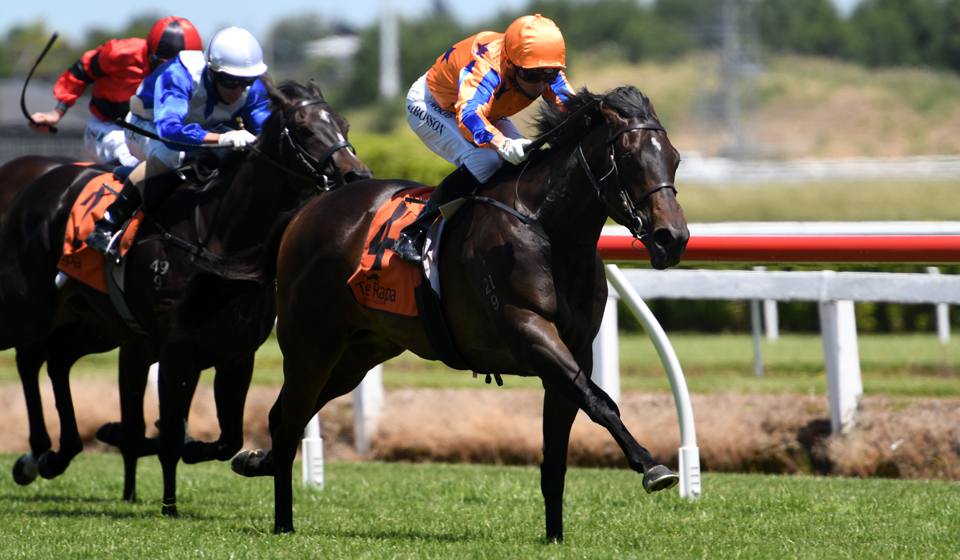 Champion trainer Jamie Richards could well have another useful filly on his hands in Bright Blue Sky (Fastnet Rock) after she bolted up in her maiden on debut at Te Rapa in the hands of Opie Bosson. Starting as the $1.40 favourite for the Fasttrack Insurance 2YO Stakes (Listed, 1100m), plenty was expected of the daughter of Fastnet Rock (Danehill).

Breaking well, the two-year-old tracked the leading pair and made her move at the 200-metre pole, striding clear under minimal riding from her jockey to beat the more experienced Sacred Satono (Satono Aladdin) by two and a quarter lengths with six-length debut winner Mascarinto (Per Incanto) a further length back in third.

“When I rode her in trackwork, I didn’t want to miss out on race day so I told David (Ellis) and Jamie I would make the 54.5 kilograms,” Bosson said.

“She is still learning as she was on and off the bit, but that can happen on race day when they go a bit quicker.

“I didn’t want to get caught up in behind them, so I popped off the rail and while she took a little bit to balance up, she then changed legs and won quite nicely in the end.”

Trainer Richards was also impressed with the filly’s performance post-race, as well as showing signs of relief that she managed to get the job done, with January’s Magic Millions raceday now firmly on the agenda.

“A bit of relief there as she has a pretty big rap on her,” he said.

“She hasn’t put a foot wrong the whole way through and first time to the races she is a stakes winner, so you can’t argue with that.

“The dream would be to get her back to the Gold Coast for races there (Magic Millions), although we don’t have to make any decisions today.”

A $600,000 purchase by David Ellis and Andrew Williams Bloodstock out of the Coolmore Stud consignment at the Magic Millions Gold Coast Yearling Sale earlier this year, the filly is owned by the Te Akau 2021 Fillies’ Breeding Syndicate.

Bright Blue Sky is the second foal out of winning Lonhro (Octagonal) mare Blue Blue Sky and is a half-sister to the placed colt Mr Blue Sky (Zoustar).

Blue Blue Sky also gave birth to a 2020 foal by American Pharoah (Pioneerof The Nile) that is currently unnamed.