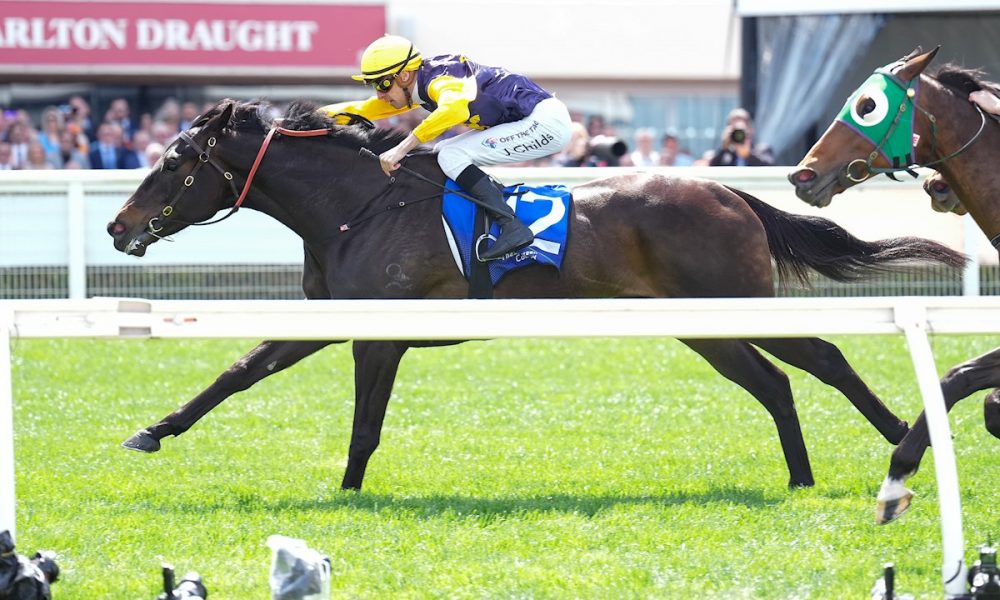 Choisir (Danehill Dancer) may be gone, but the grand stallion is still giving and it appears certain his influence will be felt for many years to come, both here and abroad.

The Aquis-bred four-year-old now has four wins and five placings from 15 starts, and already represents an exceptional return on investment. He was purchased by Gippsland Bloodstock for $32,000 at the 2019 Inglis Australian Weanling sale, pinhooked for $60,000 to Begg and racing manager Rohan Hughes at Melbourne Premier, and has now earned $326,000 in prizemoney. That’s a hefty dividend, but it could soon pale into insignificance given Cardinal Gem is now among the leading fancies for the $10 million Golden Eagle (1500m) at Rosehill on VRC Derby Day.

Choisir, who sparked a revolution by merely going to Royal Ascot – let alone winning its sprint double – currently sits in a lofty (for his vintage) 18th spot on the Australian general sires table by earnings. The champion first–season sire in 2006-07, he finished in the top 15 for nine years in a row – from his third to his 11th seasons – with a peak of eighth in 2013-14.

But with Cardinal Gem and Snapdancer suggesting Choisir’s presence as an impactful sire will be felt for some time yet, he looks set to remain a major influence on further generations judging by his results as a broodmare sire.

In Australia, Choisir has been climbing gradually up the broodmare sires’ list, rising from 37th to 24 last season, and sitting 15th for the current term, with an exciting star emerging recently in Godolphin’s In Secret (by I Am Invincible out of million-dollar winner Eloping).

In Britain, Choisir’s influence as a broodmare sire is being felt even more emphatically. All five of his Group 1 winners under this category have come in England, headed by Winter (Galileo) and her four top tier victories in a row in 2017, which helped Choisir finish seventh on Britain’s broodmare sires’ table.

“He’s been a phenomenal stallion in both hemispheres really, but he’s doing an amazing job as a broodmare sire worldwide,” says Coolmore’s Colm Santry.

“He’s always transmitted a lot of speed into his offspring, but now his mares are transmitting a lot of speed into theirs. He’s going to be an amazing influence as a broodmare sire. When you look at what he’s doing in Britain, he’s put some serious Australian speed and toughness into their breed, and into some very classy sires in Europe, and the results speak for themselves.”

There’s precious little to report by way of nicks and crosses in the blend of pedigrees that produced Cardinal Gem, but what he has done is extend a long line of impressive stakes winners from his female family – headed by dual Cox Plate (Gr 1, 2040m) winner Fields Of Omagh (Rubiton) – and the mixing with Choisir, so late in his career, has clearly been a winning move.

Aquis has an interest in Choisir’s success, since it stands two sons of his in Divine Prophet and The Mission, who was this week officially crowned Queensland’s new champion first–season sire.

In 2017, Aquis acquired the mare Eloquent Ruby (Turffontein). She’d been a $20,000 yearling who recorded one bush placing from seven starts, but had many impressive relatives.

Her full sister was the outstanding Fontein Ruby, who won thrice in black type, including the Edward Manifold Stakes (Gr 2, 1600m) of 2014. The sisters’ unraced dam Charming Ruby (Rubiton) had also thrown a Group 1 winner in The Mitigator (Master Of Design), who took Trentham’s Thorndon Mile (Gr 1, 1600m) in 2020, amongst eight career wins.

Eloquent Ruby’s second dam was Infinite Charm (Tristino), a city winner of four races who threw Infinite Grace (Prince Of Birds), a winner at Group 2 and Group 3 level who was also second in the Emirates Stakes (Gr 1, 1600m) of 2005.

Eloquent Ruby’s first mating had been in 2016 with I Am Invincible, then standing for just $55,000. That fee was little more than a quarter of what it would be only two years later, but this mating wasn’t one of his more successful. Eloquent Ruby’s first foal, Vinnie’s Girl, was a $75,000 weanling who failed to meet her yearling reserve of $150,000, and who’s now a five-year-old with an Albury maiden to her name.

Aquis sent Eloquent Ruby to Choisir, then standing for $29,700 in 2017, and the resultant August foal is now Cardinal Gem.

“Choisir had been an evergreen stallion,” Aquis’s Jonathan Davies says. “We sent a few mares to him early in that season for one crack, and luckily, this one took.

“Cardinal Gem was a straightforward foal: a good-sized colt, and it’s great to see him having the success he’s having.”

Thanks partly to Cardinal Gem, Eloquent Lady’s stock is on the rise, with an Aquis-bred colt by Lean Mean Machine (Zoustar) sold through Silverdale Farm’s draft at Inglis Classic this year to Lindsey Smith and Boomer Bloodstock for $230,000. Hughes is among the breeders of a 2021 filly by the same sire, while Eloquent Ruby was covered last November by Toronado (High Chaparral).