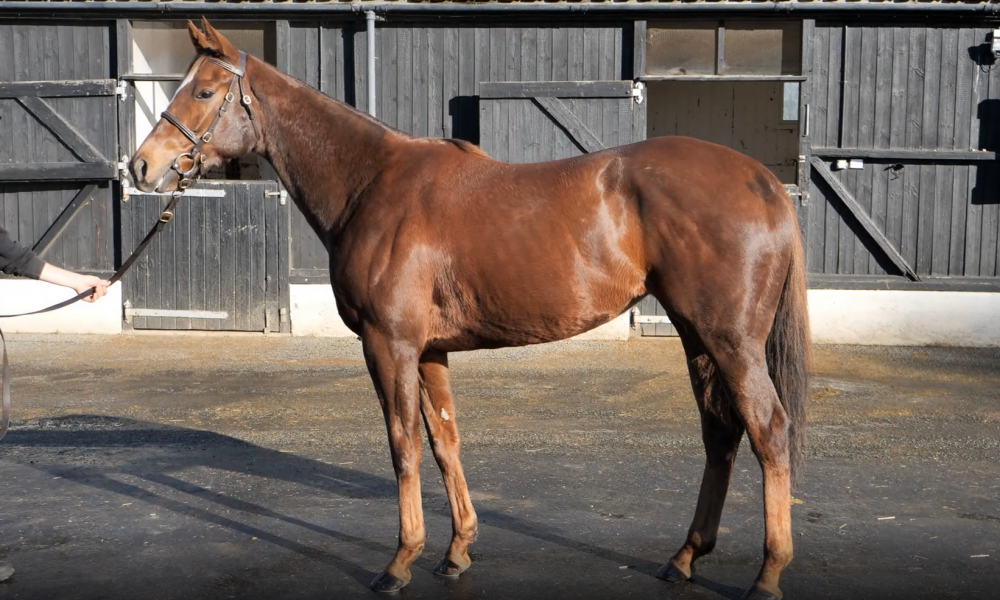 Catalogued as Lot 1512, the filly was bought in conjunction with Lillingston Bloodstock and Cambridge Stud’s regular agent, John Foote.

Bred and owned by Ireland’s Flaxman Stables, Terra Mitica has made seven starts under Sir Michael Stoute, winning twice and placing on a further four occasions for the Newmarket-based handler, with the form surrounding one win in particular standing out to Charlie Dee, who works for Luke Lillingston’s Lillingston Bloodstock.

Officially rated 84 by the British handicapper, Terra Mitica was last seen finishing third, beaten a length, behind Persist (Frankel) in a Class 3 handicap for fillies over 2000 metres at Haydock and Dee is hoping she can prove to be of stakes class Down Under.

“She was bought with John Foote. Cambridge asked John to come here and buy a number of fillies and they wanted to buy one race filly,” Dee said.

“John has a longstanding relationship with my boss Luke [Lillingston] and I’ve worked with Luke now for five years and specialised in horses in training, so John asked me to help and they wanted to buy a filly that might be able to win a Group race in Australia in New Zealand.

“This filly has some really good form this year. She won a race at Salisbury and the second horse Rousay has won a Listed race and the third Peripatetic was second in a Group 3.

“She’s from Michael Stoute and horses that have come out of Michael’s yard have done really well in the southern hemisphere in recent years.

“She’s got a lovely pedigree with which to breed from further down the line. Ulysses hasn’t had many mares go to stud yet with his oldest being three-year-olds, but he’s a really well bred horse and should make a good broodmare sire.”

Running in the Niarchos family colours, Terra Mitica is the first foal out of the Grade 3-winning Giant’s Causeway (Storm Cat) mare Mississippi Delta, herself out of a half-sister to Grade 2 winner Cowboy Cal (Giant’s Causeway).

“She’s out of a Grade 3 winner by Giant’s Causeway and it’s a good Niarchos family. The mare is in foal to Frankel, so that’s exciting, but essentially this purchase was from a racing perspective first and a breeding perspective second,” Dee said.

“I thought she was going to make a lot more. There’s not a huge amount of fillies in the sale, so given how strong the market was at the horses in training sale last month, she could’ve made more. She was the filly I really wanted to buy so I’m delighted to get her.”

Mississippi Delta is a granddaughter of Texas Tammy (Seeking The Gold), a half-sister to Grade 1 winner Behrens (Pleasant Colony).

Owned by Qatar Racing, Suspicious has taken to the track on four occasions, winning on debut before a third placing in two outings for Ralph Beckett. Most recently she finished down the field on both starts for Newmarket-based trainer Archie Watson.

Bred by Overbury Stallions Ltd & Dukes Stud, the three-year-old filly was originally a 46,000gns buy for Blandford Bloodstock at the 2019 Tattersalls December Foals Sale before changing hands for a second time, selling for €72,000 at the 2020 Arqana Deauville Select Yearling Sale.

The eighth foal out of the winning Dalakhani (Darshaan) mare White Cay, Suspicious is closely related to Listed winner Dynamic (Teofilo) and to winner Harry’s Legacy (Teofilo), while she is also a half-sister to Group-placed winner Cay Dancer (Danehill Dancer) and Cape Cay (Cape Cross).

Bruggeman, Moroney and Sambor Speak up to buy race filly

The trio of Catheryne Bruggeman, Paul Moroney and Perry Sambor were again prominent at the December Mares Sale as they saw the hammer come down at 50,000gns (approx. AU$94,400) for Speak, catalogued as Lot 1494, a winning daughter of Lanwades Stud stallion Sea The Moon (Sea The Stars).

Racing in the distinguishing green and white silks of owner-breeder George Strawbridge, Speak has one win and four placings in a six-start career to date. Her latest two outings include runner-up finishes at Chester and Goodwood respectively, the latter of those runs behind subsequent Group 3 runner-up Peripatetic (Ulysses).

“She’s a lightly raced staying filly, a winner at two which has also been second three times from just six starts, the latest over 12 furlongs at Goodwood behind a subsequent Group 3 place getter,” Moroney said.

“She came recommended by her previous trainer Andrew Balding. As a filly with potential, we are hoping she can be stakes class in Australia.”

The seventh foal out of the Group 3-winning Slickly (Linamix) mare Lixirova, she is a half-sister to four winners including Mudallel (Invincible Spirit), Valley Forge (Dansili) and Lenya (Dark Angel).

“She is for Lucky Vega,” he said. “They don’t make Kingmambo mares any more, we bought her half-sister last week – it is a great family and there are not many young Kingmambo mares left.

“I believe the Kingman (yearling colt) and the Frankel (weanling colt) out of her are nice, the reports are quite good. She should physically suit Lucky Vega and we think the nick of Mr Prospector will work on Lucky Vega.”

Violante has produced eight foals, with her 2015 gelding by New Approach (Galileo), Impulsif, winning the 2019 Prix Messidor (Gr 3, 1600m). She has also produced a filly by Frankel (Galileo) in 2020 before a colt by Kingman (Invincible Spirit) in 2021 and a colt by Frankel this year.