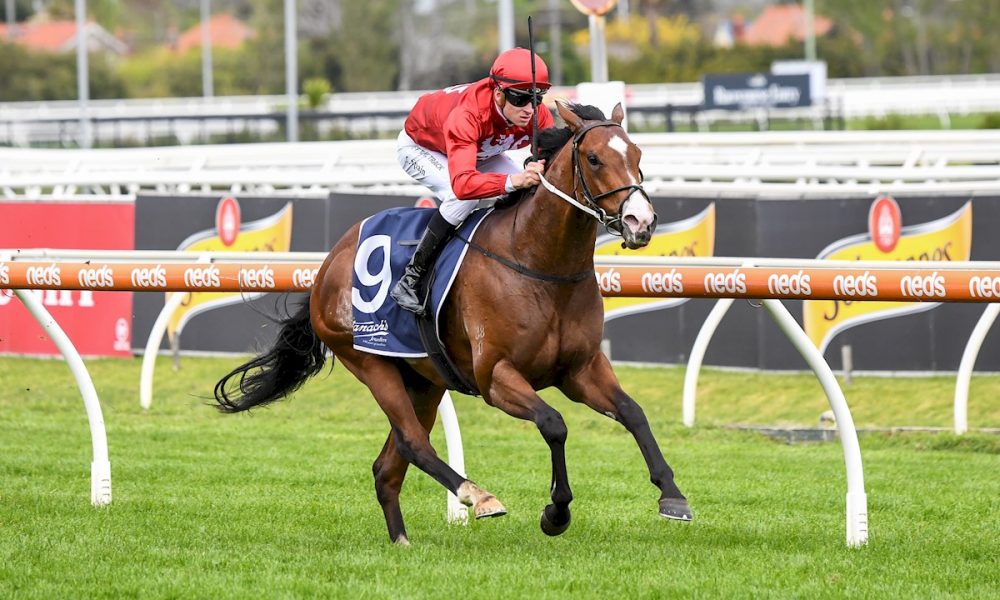 The decision to send Extreme Warrior (Extreme Choice) to an Echuca maiden to start a make-or-break spring preparation might’ve raised eyebrows amongst the owners of the talented colt but less than a fortnight later the group are staring down the barrel of a Group 1 and a horse worth north of $10 million.

On Wednesday, the Mick Price and Mick Kent Jnr-trained Extreme Warrior destroyed his opposition in the Blue Sapphire Stakes (Gr 3, 1200m), surging to favouritism for October 30’s Coolmore Stud Stakes (Gr 1, 1200m) as a result, and as a result providing John Barnes and Joy Mackay of Canning Downs Stud and their fellow owners with a nervous fortnight until Derby Day.

Extreme Warrior’s emergence is not a total surprise given he was placed in a Debutant Stakes (Listed, 1000m) and Blue Diamond Preview (C&G) (Listed, 1000m) at two, but the manner of his explosive victory, in which he put nearly four lengths on his nearest rival, arguably was his best performance despite him putting a wide margin on his opponents 12 days earlier in country Victoria.

“He has come back as a really exciting horse and he’s always shown those glimpses of brilliance, but it takes a while to put it all together. All the pieces of the puzzle seemed to have fallen into place (on Wednesday) and that was good to see,” Mackay told ANZ Bloodstock News yesterday.

“I think he was a horse that needed to experience that (first) win, and to Mick and Michael’s credit, we were thinking, ‘we thought this horse was really good, does he really have to go to Echuca?’ but it just gave him that little bit of confidence and if he can gain that much confidence from Echuca, let’s hope he can gain even more from Caulfield.”

Price cut a bemused figure post-race at Caulfield in the minutes after Extreme Warrior had demolished the field including Profiteer (Capitalist), the race favourite who, it was later revealed, had the better of his stablemate in a track gallop last Saturday.

That information had been filtered through to Extreme Warrior’s owners prior to the Blue Sapphire which had tempered the ownership group’s expectations.

“Profiteer had the edge (in the gallop), that’s right. I think they thought, as did we, that we would have been absolutely delighted if he’d run in the first three and I don’t think anyone could have forecasted he’d win the race like he did but they did expect him to run a very competitive race,” she said.

“On everything that they could see on the track, Profiteer seemed to have the edge.”

Despite sitting on a potential gold mine if Extreme Warrior can fulfil the second leg of his Group-race spring preparation, Mackay and the colt’s other owners, which includes Rosemont Stud, are not rushing off to sign a future stallion deal just yet.

He is, of course, from the same small crop by Extreme Choice (Not A Single Doubt) which has also produced Golden Slipper (Gr 1, 1200m) hero Stay Inside, Group 2 winner Tiger Of Malay and Listed scorer Xtremetime.

“I think that is a little bit premature. A few people have expressed to us the view ‘to not do anything without talking to us’, but it is very early days,” she said.

“Look, I am sure you could think of half a dozen studs where you would be thrilled to have him go, including Rosemont.

“I am sure there will be a few discussions in the next few weeks, but we are in no hurry to do anything. Quite frankly, if the status quo remained that would be good, too.”

While better known as breeders, foaling down about 20 mares a year and consigning yearlings at the major sales each year, particularly its home-state Magic Millions Gold Coast auction, Canning Downs Stud decided to invest in a pool of young horses to race.

Barnes and Mackay called on Irish agent Dermot Farrington for his assistance and it was on his recommendation while he was on the grounds at last year’s Magic Millions on the Gold Coast, that they bought into a $160,000 yearling who would become Extreme Warrior.

“Dermot’s bought several horses for us in the past with some good results, so we were very happy to do that and we have interests in a couple of other horses with the Price Kent stable as well,” Mackay said.

“Principally, we were looking for a nice horse to race, but increasingly in this day and age everyone always has an eye out for a colt, so if you can identify something that is a nice physical with a good pedigree.

“We have some shares in some other horses and you hope that one of them might make the grade and I think this fellow seems to have done that which is very exciting.”

As with much of the past two years, Mackay and Barnes won’t be at Flemington later this month to see their star colt in the flesh and they hope to keep the anticipation to a minimum.

“Fortunately the horse can’t read and, really, we are just passengers because it is all up to the stable and up to the horse,” she said.

“Hopefully he takes the next step. Michael (Kent Jnr) sent us a video after the race and he was back at the tie-ups and he was very interested in some of the fillies going out for the next race and what he might be able to do there, so he seemed to have managed the race quite comfortably.”