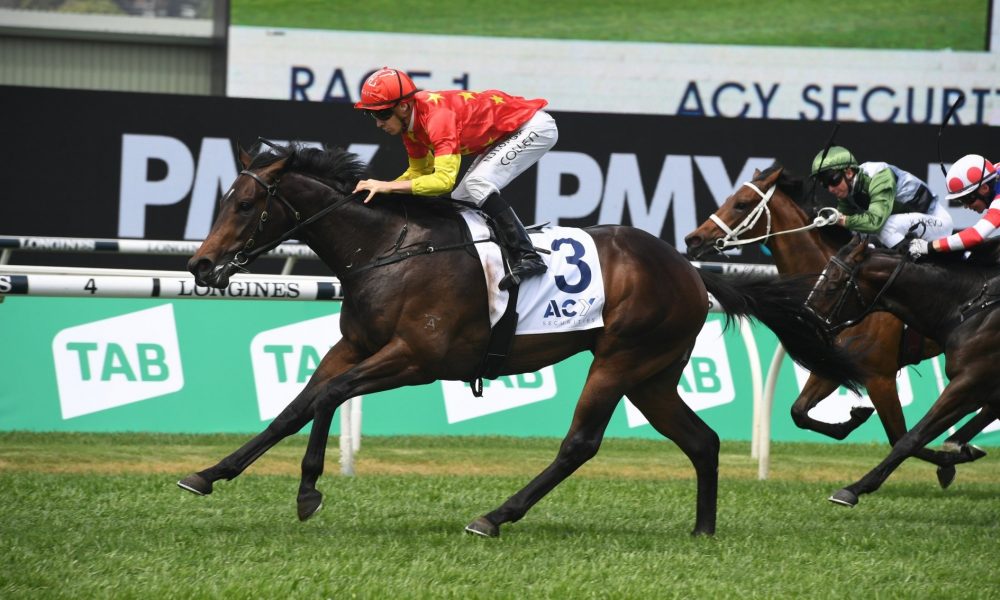 B: Senga Bissett and Ivan Woodford-Smith

In 2015, Capitalist (Written Tycoon) was awarded ANZ Bloodstock News’ Maiden of the Week after he blitzed his opposition to win the Breeders’ Plate (Listed, 1000m) on debut.

Five years later, his first winner Captivant (2 c ex Speedboat by Commands) joins his sire as an awardee after he took out the Victory Vein Plate (1000m) on the Everest undercard at Randwick.

The Peter and Paul Snowden-trained Captivant started his career in Sydney after his intended debut in Melbourne was scuppered due to a perceived failure to handle the Flemington track sufficiently to start off in the Maribyrnong Trial Stakes (Listed, 1000m). The back-up plan of the Debutant Stakes (Listed, 1000m) was also crossed off due to a wide draw.

That meant that he had to journey north to Sydney, officially trial last Tuesday in order to gain approval to race, before stepping out in the Victory Vein Plate on Saturday to cap off a whirlwind week.

Racing midfield under Jason Collett, Captivant appeared to have plenty to do upon straightening, despite tracking up solidly near the inside. Switching out upon topping the rise, he came with big strides to hit the lead at the 100 metres, racing away to score by a length and three-quarters.

It was a first season sire quinella as Akihiro (Maurice) finished second, while She’s All Class (I Am Invincible) was a further long head away in third.

“This horse is nowhere near the furnished product yet, he’s that raw he is still frozen,” Paul Snowden said post-race. “He’s got a lot more to come and, honestly, I’ve never been so confident in my life when after the gates opened and they went 100 yards I thought, ‘This horse is home,’ because he was just lobbing along in the back of the field doing absolutely nothing.

“As soon as Jason gave him a squeeze, he came up straight underneath him. It was a matter of getting to the right part of the track and getting the breaks and he was too good.”

Captivant was a fitting first winner for Capitalist, given the Snowdens prepared him to win the Magic Millions 2YO Classic (RL, 1200m) and Golden Slipper Stakes (Gr 1, 1200m) double.

“It’s pretty special,” Snowden said. “I think he stamps his stock, it’s what we’ve certainly seen so far. They’re quite mature in the mind beyond their years and body for that matter. They are lovely types and they’re only going to train on.”

Three-time Group 2 winner Anaheed (Fastnet Rock) and the well-performed Alpha Miss (Lucky Owners) are the best winners of the Victory Vein Plate since it was first run under that name in 2013, in honour of speedy filly Victory Vein (Mr Henrysee); only Anaheed was on debut, though, with Alpha Miss having won the Gimcrack Stakes (Listed, 1000m) to kick off her career.

However, Captivant – bred by Ashleigh Thoroughbreds principals Senga Bissett and Ivan Woodford-Smith – appears likely to chase the same double achieved by his sire.

Captivant, a $550,000 purchase from the 2020 Magic Millions Gold Coast Yearling Sale by a consortium including China Horse Club, Newgate Bloodstock and Starlight Racing, is the second foal to race out of Speedboat (Commands), whose career highlight was a placing in a picnic maiden at Burrumbeet.

Raced by David Moodie’s Contract Racing, Speedboat comes from a prolific Moodie family. She is a half-sister to dual Listed winner Cross Current (Keltrice), while other half-sisters have produced Group 1 performers Crown Prosecutor (Medaglia d’Oro) and Willow Creek (Tale Of The Cat).

She produced a Hellbent (I Am Invincible) colt last year, while she is back in foal to Hellbent this year.