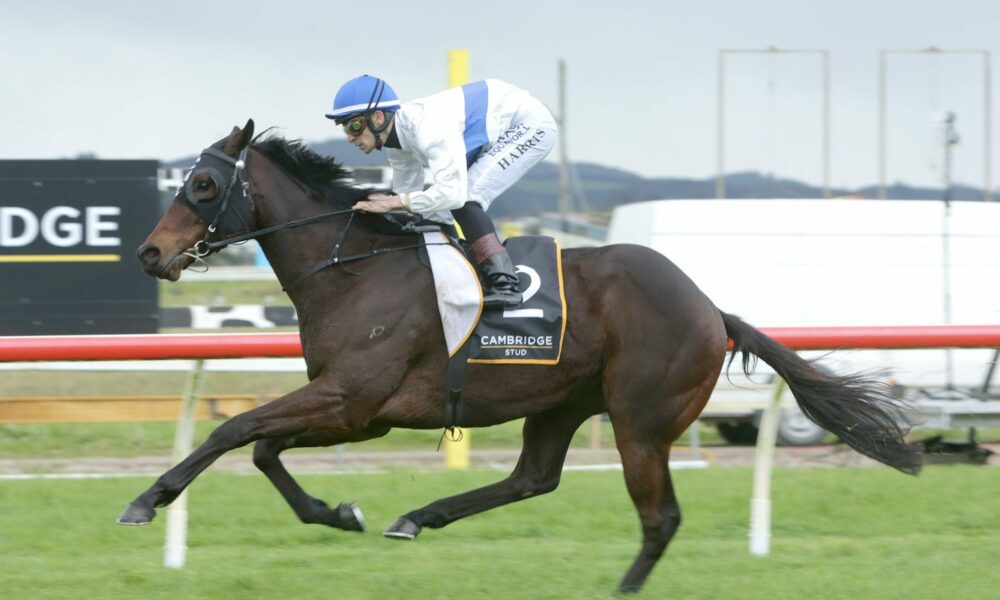 The classic was the fifth consecutive success for the Clayton Chipperfield-trained Catalyst, previously a winner of three other black type events including the Hawke’s Bay Guineas (Gr 2, 1400m) and the Northland Breeders’ Stakes (Gr 3, 1200m) but based on pedigree it is difficult to predict whether he will get 2000m or the Derby distance of 2400m. On Saturday Catalyst could hardly have been more impressive, sitting back in the field early then overcoming a bump when pulled out in the straight before quickly asserting his superiority to reach the lead then being eased down to triumph by two and a quarter lengths over the strong finishing Harlech (Darci Brahma). Sherwood Forest (Fastnet Rock) was another length and a half back in third place in a race time of 1:36.07.

Bred by owner Dick Karreman’s The Oaks Stud, Waikato, also breeder of Harlech, Catalyst is by the stud’s very accomplished stallion Darci Brahma (Danehill) and is his 10th Group 1 winner and fourth classic winner among a tally of 36 black type winners. Darci Brahma has three times reached second place on the New Zealand general sires’ list while his other classic winners are the fillies Gust of Wind, conqueror of Winx (Street Cry) in the ATC Australian Oaks (Gr 1, 2400m), Artistic in the New Zealand Oaks (Gr 1, 2400m) and Risque in the New Zealand 1000 Guineas (Gr 1, 1600m). A New Zealand Two Thousand Guineas winner himself, Darci Brahma was recognised as the champion two-year-old in New Zealand in 2004/05, champion three-year-old of the following season and then champion New Zealand sprinter of 2006/07. On a visit to Australia late in his juvenile season he won the QTC T.J. Smith Classic (Gr 1, 1600m). He returned to Australia as an autumn three-year-old to finish second to Apache Cat (Lion Cavern) in the VRC Australian Guineas (Gr 1, 1600m) before finishing his track career at home with victories in the Waikato Draught Sprint (Gr 1, 1400m) and the timehonoured WRC Telegraph Handicap (Gr 1, 1200m). Darci Brahma’s own leaning to speed may be attributed to the influence of his great sire Danehill (Danzig) but a clue to his ability to leave winners at 2400m is the breeding and performance of his dam Grand Echezeaux (Zabeel), winner of the SAJC Australian Oaks (Gr 1, 2000m) and in turn closely related to outstanding stayer Ethereal (Rhythm), winner in 2001 of the rare Caulfield Cup (Gr 1, 2400m)/Melbourne Cup (Gr 1, 3200m) double. It is a shame that Catalyst is no longer a colt as his strong female pedigree would give him real appeal as a stallion prospect. Catalyst is the ninth foal and sixth winner from his highly bred dam Evana (Entrepreneur) whose sire was one of the most disappointing stallion sons of Sadler’s Wells (Northern Dancer). Evana won three races at 1300m and 1600m including one at Moonee Valley and the best by far of her earlier winners is stakes placed Sydney performer Stratana (Stratum), winner of five races up to 1250m to earn $ 210,550. Evana foaled a sister to Catalyst last year after which she was covered by Tivaci (High Chaparral). To get an impression of the quality and depth of Catalyst’s pedigree you need to go back to his unraced second dam Miss Trump (Last Tycoon), a halfsister to champion racehorse and sire Lonhro (Octagonal) and his talented siblings Niello (Octagonal) and Shannara (Octagonal), all out of stakes winning two-year-old Shadea (Straight Strike) who was also twice second at Group 1 level.This is also the family of AJC Australian Oaks (Gr 1, 2400m) winner Mahaya (Sir Tristram) and former star filly Gay Poss (Le Filou). Miss Trump proved to be a more than useful broodmare as she bred Group 3 winner Diamond Deck (Octagonal), dam of stakes winner All Decked Out (Darci Brahma) and other daughters who became dams of Devise (Darci Brahma), a Group 1 winner, Group winner Zurella (Zabeel) and Group winner King Lionheart (Al Maher). A 4m x 4m x 5m triple of Northern Dancer (Nearctic) is the dominant feature of Catalyst’s pedigree with a fourth male cross further back plus, through Danehill, a female strain of Northern Dancer’s dam Natalma (Native Dancer)