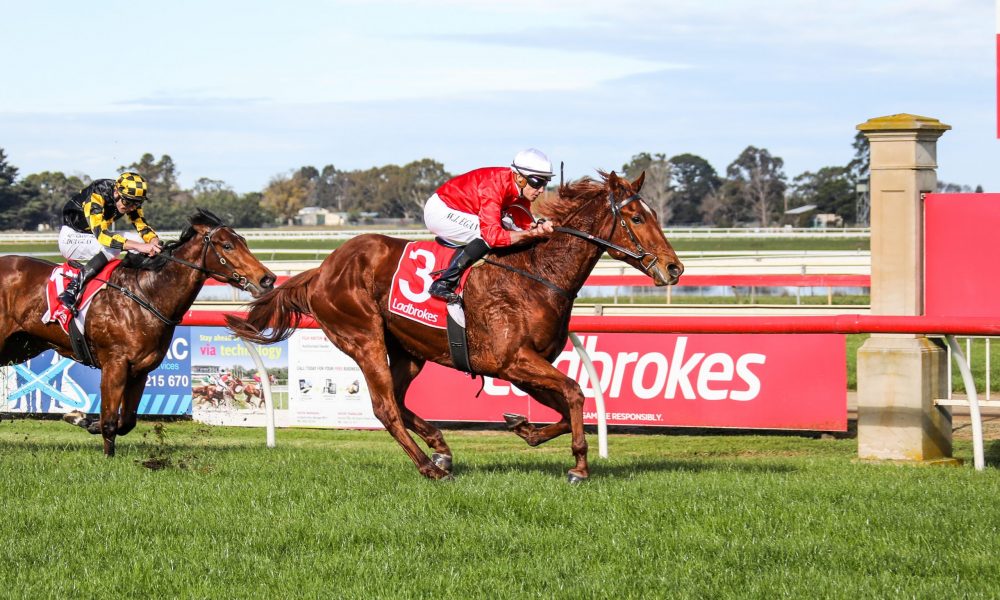 The Tait family’s red colours with a white cap have graced racetracks right across Australia for almost a century and have been carried by some of the greats of the turf, from the precocious Baguette (Rego) through to the remarkable Tie The Knot (Nassipour).

It is the Tie The Knot family that this week produced another horse to follow in the form of Cherry Tortoni (Night Of Thunder), a maiden winner at Sale on Wednesday.

By 2,000 Guineas (Gr 1, 1m) winner Night Of Thunder (Dubawi) out of Tortoni (Strategic), the youngest half-sister to Tie The Knot, Cherry Tortoni looks set to continue in his family’s footsteps if his impressive win is anything to go by.

Settling midfield under Billy Egan, Cherry Tortoni came widest of all upon straightening and showed tremendous race sense, rushing up quickly and never looking in too much doubt. At the line, he had a length and a half to spare over Not A Zak (El Roca) with Miss Conduct (Dissident) a length away in third.

Cherry Tortoni was among the first horses reared at Twin Hills Stud after Olly and Amber Tait purchased the historic farm, formerly owned by Mike Willesee and then the Ingham brothers, from Godolphin in 2017.

Bred and raced by Olly Tait, in conjunction with his sister Jill Nivison, Cherry Tortoni is the third foal to race and the second winner for Tortoni, who was a winner at Wagga from four starts in 2013.

It is perhaps even more fitting that Patrick Payne is Cherry Tortoni’s trainer, given that Payne carried the red and white aboard Tie The Knot to victories in the Chipping Norton Stakes (Gr 1, 1600m) twice, the Ranvet Stakes (Gr 1, 2000m) and the Expressway Stakes (Gr 2, 1200m).

For Night Of Thunder, it was his eighth individual winner in the southern hemisphere this season from just 12 runners, taking him into second on the First Season Sires table, both on earnings – behind Pride Of Dubai (Street Cry) – and by winners, behind Spill The Beans (Redoute’s Choice).

Night Of Thunder only served one season at Darley’s Kelvinside property in the Hunter Valley, producing 58 live foals, but the racetrack performances of that one crop suggest that he would be popular should he ever return down under.