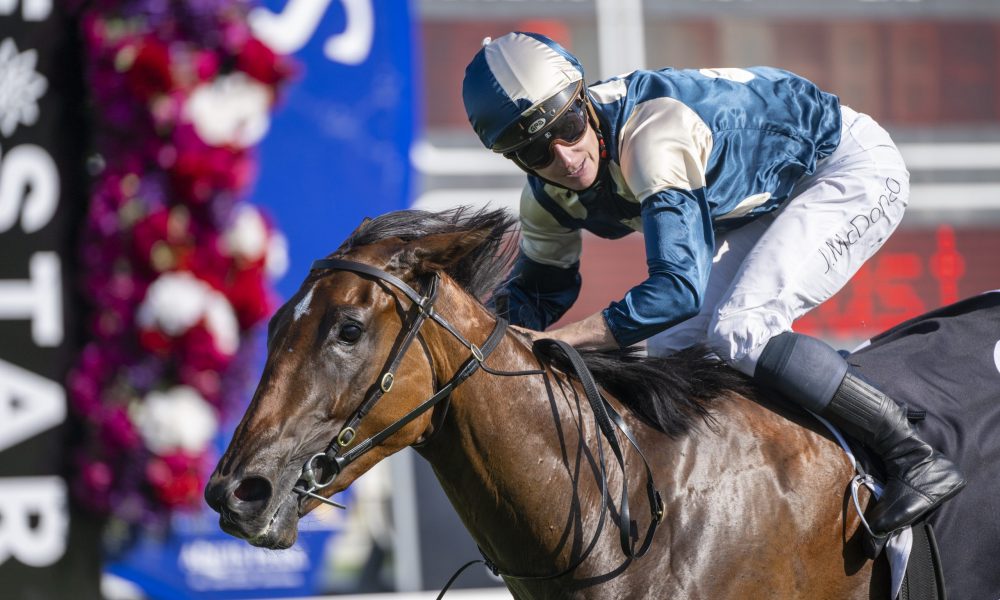 The one-time wannabe jockey turned Holden cars baron has built success in thoroughbreds through more than three decades at a few locations, including Cowra and on the Nepean River, before settling in the Southern Highlands.

A sideline is advising Highclere Stud on its breeding in Australia, which is how the UK operation’s mare Piping Hot (More Than Ready) came to be covered by Written Tycoon to produce Coolangatta.

“She’s a lovely mare and she lives at our place full time,” said Muir, adding the collaboration had grown from a friendship with Highclere’s John Warren.

“We don’t go looking for clients. It’s just that I met John and his wife a few years ago and we struck up a nice bond together. We visit them when in England, and we look after four nice mares for them here.”

Piping Hot won two from four for Gai Waterhouse and Adrian Bott before first going to Snitzel. She produced Snitzonfire, a $425,000 yearling buy for Waterhouse-Bott at the Magic Millions Gold Coast Yearling Sale two years ago who ran in yesterday’s Magic Millions 3YO Guineas (RL, 1400m) 45 minutes after Coolangatta’s success.

In their usual style of looking at type first and then pedigrees, Milburn selected Written Tycoon next.

“We went to Written Tycoon second-up and it put a bit of scope into the mare,” said Milburn Creek stud manager Scott Holcombe. “The first foal, Snitzonfire, lacked a bit of leg. Whereas Written Tycoons can get a bit more scopey.

“The plan worked as intended. Coolangatta wasn’t a huge yearling, but she was tough looking – athletic, a lovely mover, and very workmanlike.”

She sold here last year for $280,000, which seems a tad small given this week’s dizzying figures, although Holcombe said Milburn were happy with the price, especially since she was going to the Maher-Eustace team.

Piping Hot now has a Dundeel (High Chaparral) filly going to the Inglis Australian Easter Yearling Sale and is back in foal to Written Tycoon (Iglesia).

Coolangatta’s victory put the icing on a fine week for Milburn in which it sold ten lots at an average of $419,000 and an aggregate of $4.2 million, making it the highest-grossing of the four main Southern Highlands studs at the sale.

Its top lot was an $800,000 filly by I Am Invincible (Invincible Spirit) out of Walk With Attitude (Hussonet). That sale made amends for a half-brother having to be sold for $500,000 at the Gold Coast last June after injury put him out of Inglis Easter where, Muir reckons, he might have made a million.

Coolangatta’s part-owner John O’Neill was ecstatic after the filly made it three wins from three starts. The Melbourne billboards businessman, who races her in partnership with a group including Ozzie Kheir and Brae Sokolski, said the team behind the filly remain hopeful she could continue to the Golden Slipper Stakes (Gr 1, 1200m).

“We bought her really for the Magic Millions race,” O’Neill said. “She’s won a couple of nice Group races on the way through. She’s got her job done now. We love her, the trainers love her, we’ll put her out for three or four weeks for a freshen up and if she’s comfortable we’ll go to the Slipper, I’d say.”

O’Neill said Coolangatta had been purchased on advice from Maher-Eustace’s bloodstock manager Will Bourne, who he said had pulled a cheeky swifty in presenting his mother Debra with a 2.5 per cent share in her.

“Will was looking to get his mum a birthday present and he said ‘Geez I’d love to get her a share’,” O’Neill said. “So we gifted him the 2.5 per cent, but he didn’t tell his mum that. He told her he’d bought it for her. He’s hilarious.”