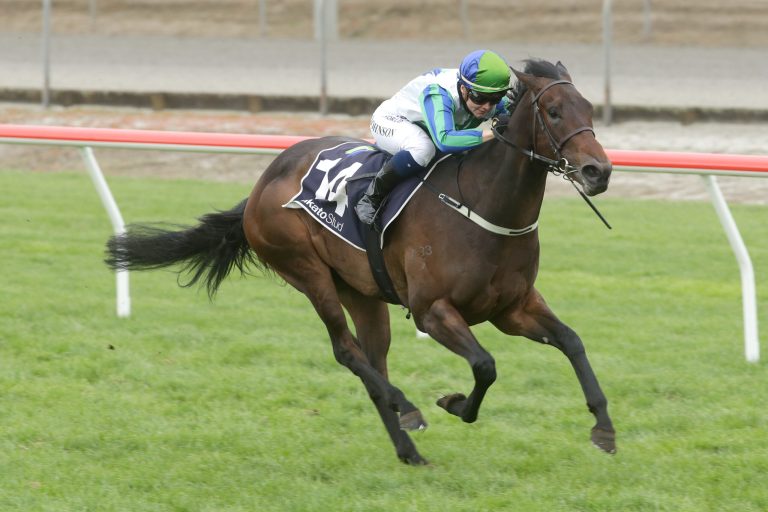 A six and a quarter length win over 1200 metres at Matamata on Wednesday stamped Cornflower Blue (Savabeel) as a filly of immense potential, one that has seen her firm into $10 for the New Zealand 1,000 Guineas (Gr 1, 1600m) in November.

Off the back of that win, Cornflower Blue was sent out as $1.60 favourite and never really looked in much doubt.

Bouncing out well from the gates, rider Danielle Johnson sat out wide on the bay but she was handy throughout. It was an exercise in cruise control as she raced clear on the slow track to score by six and a quarter lengths over Duby (Ocean Park) with Tickle Me Almo (Alamosa) a further half-length away in third.

“It was a pretty exciting win from a filly that we’ve had a lot of time for,” Richards told NZ Racing Desk.

“She’d run a strong second to a promising horse, Need I Say More, and although I was concerned about the ground she was able to put herself up on speed and then put a space in them late in the race to win quite impressively.

“She had a small stress fracture in her cannon bone and needed a good, long break after her debut run in February and thankfully the Waikato Stud team, Dr. Chris Phillips, Kerrie Cox and Sam McLeish, along with our vet Ronan Costello, gave her plenty of time to get over that and it’s all in front of her now.

“It’s nice to have another really good filly in the stable for Mark & Pippa Chittick, and Garry & Mary Chittick, so we are looking forward to the future with her.”

Bred by Waikato Stud, Cornflower Blue was due to be offered at last year’s NZB Premier Yearling Sale at Karaka but was withdrawn and retained to race by the Chittick-owned farm.

Cornflower Blue is out of the O’Reilly (Last Tycoon) mare Tiffany Yellow, a three-time winner at Northam, Belmont and Ascot in Western Australia for trainer Ivan Haggerty in 2012.

She has produced three named foals, with Cornflower Blue looking the most promising. An older half-brother by Pins (Snippets), Maximus Decimus, raced three times on the South Island, while an older brother named Go Beel Go (Savabeel) is yet to race, having trialled twice in Victoria earlier this year.