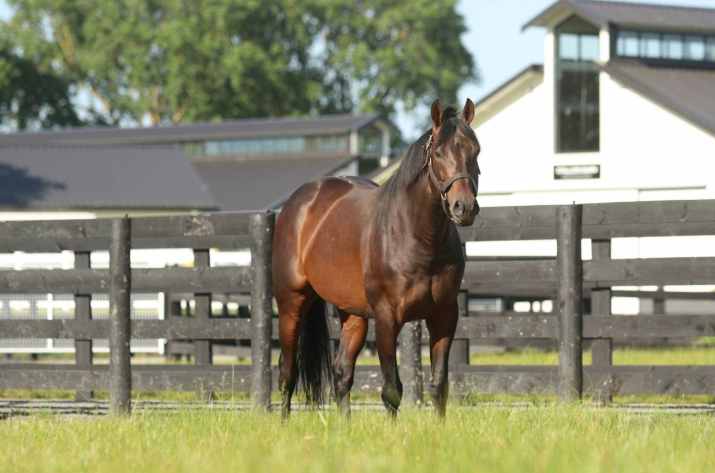 De Gaulle – Madame Du Gast (3 f ex Tremolo by Special Bond) gave her sire De Gaulle (Exceed And Excel) his first individual winner in the Eynesbury Plate (1000m) at Flemington. Bred and owned by Richard Andersen, Madame Du Gast scored by three-quarters of a length from the heavily-backed favourite Elite Icon (Nicconi), with Silly Salmon (Fighting Sun) the same margin away third. “There is plenty of improvement to come,” said trainer Trevor Rogers. “That was her first race. She was travelling with her head on the side and she was not sure what she had to do, while in herself, she’s still a baby at home. It was good to get the win today and we’ll let her tell us where we go.” The unraced Du Gaulle, a half-brother to Golden Slipper (Gr 1, 1200m) winner Estijaab (Snitzel) produced 16 foals in his first crop and stands at Bombara Downs. Madame Du Gast is the first winner out of Tremolo being her second live foal. A full-sister, Tremolo’s third foal, is catalogued as Lot 701 at the Inglis Premier Yearling Sale.

Merchant Navy – The Phillip Stokes-trained In The Navy (2 f Merchant Navy – Ennerdale by Singspiel) provided her sire Merchant Navy (Fastnet Rock) a second individual winner when taking out the Coopers Brewery Plate (1100m) at Gawler. Going off as the odds-on favourite, the two-year-old filly beat Phenotype (Bon Hoffa) by one and a quarter lengths with a further length and a half back to Forager (Shalaa) in third. The tenth foal out of unraced mare Ennerdale (Singspiel), In The Navy is a half-sister to Group 2 winner Samara Dancer (Hinchinbrook) and Group 3 winner Eclair Big Bang (Savabeel). Merchant Navy stood at Coolmore Stud in 2021 for a fee of $33,000 (inc. GST).

Ribchester – Plymstock (2 f Ribchester – Outdoor by Redoute’s Choice) launched herself into contention for the Blue Diamond Stakes (Gr 1, 1200m) when she was a stylish winner of the Heineken 3 Handicap (1000m) on debut at Randwick, and in the process also became the first southern hemisphere-bred winner for Haunui Farm shuttler Ribchester (Iffraaj). The James Cummings-trained filly beat Deep Expectation (Deep Field) by a length with Emperor (I Am Invincible) a head further back in third. The two-year-old is a half-sister to three winners, headed by Godolphin’s two-time Group 1 hero Trekking, and Listed winner Winnie Star (Medaglia D’Oro). Ribchester stood at Haunui Farm in 2021 for a fee of NZ$15,000 (plus GST).

Not A Single Doubt – Stronger (5 h ex Star Pupil by Starcraft) gave his sire Not A Single Doubt (Redoute’s Choice) a 16th individual Group 1 winner when causing a minor upset to win the Centenary Sprint Cup (Gr 1, 1200m) at Sha Tin. Trained by Douglas Whyte, who was celebrating a first top-flight success as a trainer, the five-year-old battled well to beat Sky Field (Deep Field) by a head under Vincent Ho, with Hot King Prawn (Denman) a further half-length back in third. Bred by Arrowfield Stud, Stronger was purchased by James Harron Bloodstock for $1,050,000 at the 2018 Inglis Australian Easter Yearling Sale, before being secured by George Moore Bloodstock to race in Hong Kong. He is the first foal out of winning mare Star Pupil (Starcraft), who herself is a sister to the Listed scorer Ain’tnofallenstar and to winner Hammer Time, while also being a half-sister to Group 3 winner Bachman (All American) and to the useful sprinter Stepitup (Hussonet).

Almanzor (pictured) – Cambridge Stud shuttler Almanzor (Wootton Bassett) sired his first southern hemisphere-bred winner and first stakes winner when the Jamie Richards-trained Dynastic (2 c ex Meir by Volksraad) shed his maiden status on his second start in the Karaka Million 2YO (RL, 1200m) at Ellerslie. The two-year-old colt showed a good turn of foot to beat Wolverine (Tivaci) by two and a quarter lengths, while the winner’s stablemate Fellini (Belardo) was another length and a quarter away in third. Almanzor’s oldest crop in the southern hemisphere are three-year-olds and his ten individual winners are headed by the stakes-placed duo Saving Grace and Queen Trezy. The son of Wootton Bassett (Iffraaj) stood at Cambridge Stud for a fee of NZ$30,000 (plus GST) in 2021.

Harbinger – Lubeck (3 c ex Reizend by Special Week) provided his sire Harbinger (Dansili) with a 20th individual stakes winner when he won the Wakagoma Stakes (Listed, 2000m) at Chukyo. Trained by Naosuke Sugai, the three-year-old colt beat Riad (Deep Impact) by one and a quarter lengths with a further length back to Meisho Lanakila (Duramente) in third. The sixth foal out of the Special Week (Sunday Silence) mare Reizend, Lubeck is a brother to dual top-flight winner Deirdre, and a half-brother to the Listed-placed winner Odysseus (Falbrav). Harbinger currently stands at Shadai Stallion Station for a fee of ¥6,000,000 (approx. AU$73,461).

Midnight Lute – Call Me Midnight (3 c ex Overseen by First Defence) gave his sire Midnight Lute (Real Quiet) a 37th individual stakes winner when winning the Lecomte Stakes (Gr 3, 1700m) on the dirt at Fair Grounds. Trained by J Keith Desormeaux, the three-year-old colt battled well to beat Epicenter (Not This Time) by a head under James Graham, with race-favourite Pappacap (Gun Runner) a further three-quarters of a length back in third. Call Me Midnight is one of four foals out of the unraced First Defence (Unbridled’s Song) mare Overseen, who herself is out of the Listed-winning mare Jibe (Danzig), a sister to the Grade 1 winner Yashmak and a half-sister to the champions Commander In Chief (Dancing Brave) and Warning (Known Fact). Midnight Lute will stand at Hill ‘N’ Dale Farm in 2022 for a fee of US$15,000 (approx. AU$20,880).

Pins – The late Waikato Stud-based sire Pins (Snippets) chalked up his 86th individual stakes winner when the Jamie Richards-trained and Te Akau-owned Pin Me Up (3 f ex Brampton Loco by O’Reilly) landed the Karaka Million 3YO (RL, 1600m) at Ellerslie. The three-year-old filly stayed on bravely when challenged by Tutukaka (Tavistock), eventually beating that rival by a neck. Karman Line (Myboycharlie) finished another length and a half away in third. Pin Me Up was purchased by Andrew Williams for NZ$270,000 at Book 1 of the New Zealand Bloodstock Karaka Yearling Sale in 2020 and she is out of the winning O’Reilly (Last Tycoon) mare Brampton Loco, who is a half-sister to Group 2 winner Pimms Time (Pins). Pins died in 2018.

Sweynesse – Novara Park-based sire Sweynesse (Lonhro) was provided with his fourth individual stakes winner when the Mike Moroney and Pam Gerard-trained Dragon Queen (4 m ex Happy Endings by Tavistock) took out the Westbury Classic (Gr 2, 1400m) at Ellerslie. Last seen running third in the Rich Hill Mile (Gr 2, 1600m), the four-year-old mare added black type to her CV when defeating Faithful Feat (Per Incanto) by a nose. One More Time (Per Incanto) was a further length and a quarter further back in third. Purchased by New Zealand Chinese Jockey Club and Paul Moroney Bloodstock for NZ$50,000 at Book 3 of the New Zealand Bloodstock Karaka Yearling Sale in 2019, Dragon Queen is out of the unraced mare Happy Endings (Tavistock), who is daughter of multiple Group 1 winner Snap (Kingdom Bay). Dragon Queen’s Per Incanto (Street Cry) half-sister will be offered by Brighthill Farm as Lot 290 at Book 1 of the upcoming New Zealand Bloodstock Karaka Yearling Sale.

Vespa – The Michael and Matthew Pitman-trained Mackenzie Lad (3 g ex Tallulah Belle by Iffraaj) scored in the Gore Guineas (Listed, 1335m) and in the process handed the Valachi Downs-based stallion Vespa (Elusive City) with this third stakes winner. However, triumph quickly turned to tragedy when the gelding suffered a fatal injury shortly after crossing the line. Before the tragedy struck, the gelding showed bravery in spades when edging out Ruby’s Lad (Ghibellines) to win by a neck. Irish Red (Burgundy) was a further length and a half away in third. Raced by his breeders Grant Midgley and Stephanie Rathgen, Mackenzie Lad lined up in 13 races for three wins, seven placings and more than NZ$104,000 in prize-money. Prior to his first black type victory in this Listed race, Mackenzie Lad had finished second in the Champagne Stakes (Listed, 1200m) and third in the War Decree Stakes (Gr 3, 1600m). He was also an unlucky sixth in the New Zealand 2,000 Guineas (Gr 1, 1600m) in November.