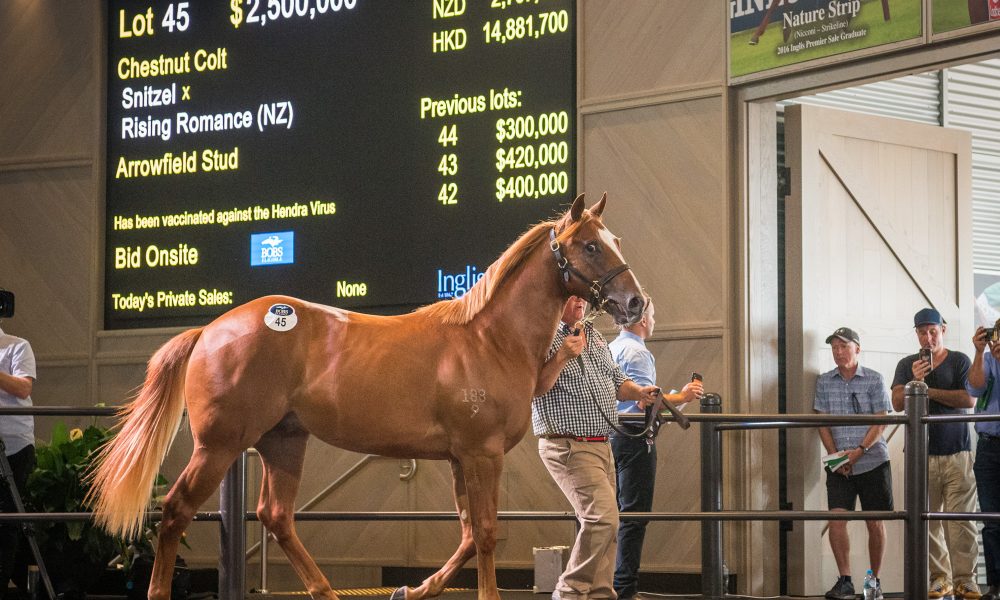 High-end colts buyers and those searching for a star filly will be spoiled for choice at the Inglis Australian Easter Yearling Sale, with siblings to some of the southern hemisphere’s best-performed racehorses in recent years set to go under the hammer at Riverside Stables in April.

A 487-lot catalogue, an increase of 21 compared to 2021, has been put together by Inglis for the sale widely regarded as the company’s, if not Australasia’s, pinnacle yearling auction of the year.

Confirmation of the 2022 line-up, released last night, reveals brothers and half-brothers to Golden Slipper (Gr 1, 1200m) winners Estijaab (Snitzel) and She Will Reign (Manhattan Rain); exciting Group 1-winning colt Profondo (Deep Impact); valuable stallion prospect Home Affairs (I Am Invincible); as well as the already retired duo of King’s Legacy (Redoute’s Choice) and Loving Gaby (I Am Invincible), are to be offered at the Sydney sale on April 5 and 6.

“I think Easter distinguishes itself from any other sale in the calendar in Australasia and for good reason,” Hutch told ANZ Bloodstock News yesterday.

“I think people look at it through a different lens. Last year’s sale was fantastic, the second-best ever, with a 90 per cent clearance rate and 23 million dollar-plus horses sold. It was fantastic.

“Our objective is to try and go out and do better again. It’s a slightly bigger catalogue, but we have representation from all the right people, and I think people are just excited about being able to go to a sale like Easter.”

Hutch said major domestic buyers had already given feedback to indicate they will make the Easter sale a concerted focus this year, albeit without ignoring preceding sales.

“Then, from an international perspective, we’ll be working hard to facilitate international involvement in the sale, whether it’s from people here in the flesh or people who are operating through affiliates, proxies or agents,” he said.

“Conditions are improving for international travel, but they still aren’t straightforward, and I think it will still pose a challenge for the Easter sale.

“We’ll work hard over the next six weeks to try and put as much in place as we can to get people here. Statistically, if you want to give yourself the best chance of buying a good horse, whether it’s a stakes-winning two-year-old, a Group 1-winning colt or a filly who goes on to be a foundation broodmare having won good races in Australasia, you’ve got to be a participant at the sale.”

While the highly–competitive market played in by colts buyers – including the likes of the Coolmore syndicate, Rosemont Stud’s Victorian Alliance, James Harron’s proven partnership and the successful Newgate Farm-China Horse Club group – was again to the fore at the Magic Millions Gold Coast Yearling Sale earlier this month, the cohort is sure to have plenty of firepower left for the elite Easter offering.

“Coolmore participated in the virtual Easter sale two years ago and bought Home Affairs and he’s arguably the most valuable racehorse in Australasia now. He was a dominant winner of a Coolmore Stud Stakes and Royal Ascot has already been spoken of. Potentially, the horse is going to be one of the most expensive first season stallions on record based on his credentials. He’s just a phenomenally exciting horse.

“Similarly, Newgate participated in the same Easter sale looking for elite colts and they came up with In The Congo and he goes and wins the Golden Rose (in 2021), which is arguably Sydney’s most important race for three-year-olds. The year before they found Wild Ruler at the same sale.”

The Easter sale is also seen as a way of procuring fillies with immense residual value and the 2022 catalogue again provides opportunities for owners and trainers to target that side of the market, one which has also experienced staggering increases in the value of well-bred and performed racemares off the track in recent years.

“Fillies are hugely valuable because they retain value beyond just their race performance. Their pedigree and physique are important factors in contributing to what makes a good broodmare  and people are creating dynasties out of fillies that they sourced at the Inglis Easter Yearling Sale,” Hutch said.

“Inevitably, in many respects, there is a temptation on the part of the breeder to retain these fillies, but I think the group of fillies that we have going to Easter in 2022 is as strong a group of fillies in my short time at Inglis. In the spring, draft after draft, we identified fillies that were just spectacular, so to have them all at Easter is a hugely exciting proposition.

“For people who want to invest in these bluechip fillies – and these fillies are an investment – Easter is where you go to get the best looking, the best bred, the best credentialed, and they back it up at the racetrack.

“We’re really excited by what is going to be presented at Easter because it’s a pretty special group, I think.”

Kia Ora will offer an American Pharoah (Pioneerof The Nile) half-sister to A J Moir Stakes (Gr 1, 1000m) winner Wild Ruler (Snitzel) as Lot 205, while Tyreel Stud has an I Am Invincible (Invincible Spirit) filly out of top-producing mare Pinocchio (Encosta De Lago), making her a half-sister to Everest (1200m) winner Classique Legend (Not A Single Doubt) and Hong Kong Group 2 winner Aethero (Sebring). She is catalogued as Lot 348.

Yarraman Park Stud will offer the Per Incanto (Street Cry) sister to John O’Shea’s sprinter Lost And Running (Lot 141), while Arrowfield has a Pariah (Redoute’s Choice) three-quarter sister to Easter sale graduate Stronger (Not A Single Doubt), a gallant winner of the Centenary Sprint Cup (Gr 1, 1200m) in Hong Kong on Sunday. She is catalogued as Lot 445.

Blue Diamond Stakes (Gr 1, 1200m) winner Catchy (Fastnet Rock) has a Zoustar (Northern Meteor) daughter at Easter, a half-sister to last year’s $1.2 million I Am Invincible filly. She is catalogued as Lot 101. Meanwhile, dual Group 1-winning mare Kenedna’s (Not A Single Doubt) first foal, a filly by Dundeel (High Chaparral), is up for grabs as Lot 243. An I Am Invincible daughter of champion mare Princess Coup (Encosta De Lago) is also in the Easter catalogue as Lot 364.

Inglis’ more immediate focus, however, will be on its Classic Yearling Sale, with on-site inspections beginning at Riverside Stables next week, before the Melbourne Premier Yearling Sale begins on February 27.