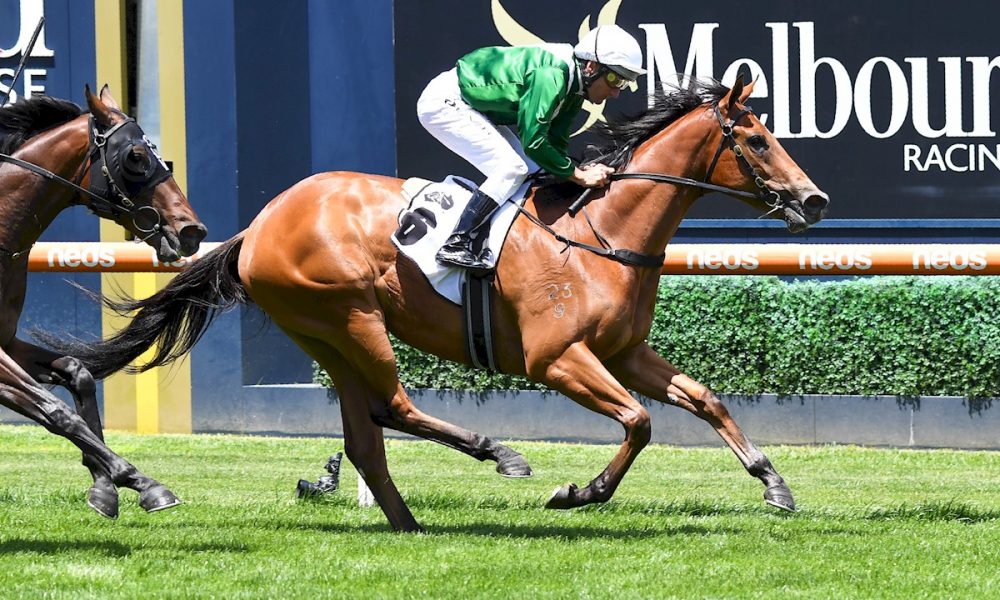 2 f I Am Invincible – Maroon Bay by Exceed And Excel

Emirates Park look to have another Golden Slipper (Gr 1, 1200m) candidate on their hands, this time a homebred in the shape of Ebhaar (I Am Invincible) after her impressive debut win in the Thoroughbred Club Merson Cooper Stakes (Listed, 1000m) at Caulfield last Saturday.

Showing good speed from barrier eight, the Peter and Paul Snowden-trained filly soon settled outside the leader (Marincanto Doll), travelling at a good pace. Taking up the lead on straightening, she rallied gamely under Damien Oliver when challenged close to home to beat fellow debutants Boldinho (Brazen Beau) by three-quarters of a length with Moko (Impending) a further two lengths back in third.

“The main thing from that was that she jumped well and put herself on the speed,” stable representative Andrew Angelone said. “She wanted to go a little bit quicker, but she settled nicely and when she was challenged, she kicked.

“Now that she’s got the win and the prize-money, Peter and Paul can plan wherever they’d like to go. She might go out for a break, we’ll see.”

The daughter of I Am Invincible (Invincible Spirit) had already indicated she could be useful  when winning a 1045-metre trial at Randwick on October 29, beating her stablemate Calgary Stampede (Snitzel) into third who subsequently went on to impressively break his maiden over 1100 metres at Rosehill on November 17.

Prior to her run yesterday, the filly had also cruised to an easy victory in an 800-metre jump-out at Flemington.

The Nassah Looter-owned Emirates Park have won the Golden Slipper prize twice previously with Inglis Easter purchases Mossfun (Mossman) and $1.7 million filly Estijaab (Snitzel) in 2014 and 2018 respectively, but they are yet to do so with one bred from their own establishment.

“It would be amazing to win the Slipper with one we have bred,” said Bryan Carlson, general manager at Emirates Park. “We have won it with two fillies we have bought, but our main aim would be to do it with a homebred and fingers crossed she can be there at the end of March.”

Ebhaar is the fourth foal out of two-time city winner Maroon Bay (Exceed And Excel), and is a half-sister to Group 3 winner Shotmaker (Shooting To Win) as well as winner Sienna Rose (More Than Ready).

Maroon Bay, a $370,000 from the Magic Millions National Broodmare Sale in 2015, is a half-sister to the Group 1 winner and Coolmore sire Merchant Navy (Fastnet Rock). The mare foaled a Brazen Beau (I Am Invincible) filly in September this year.