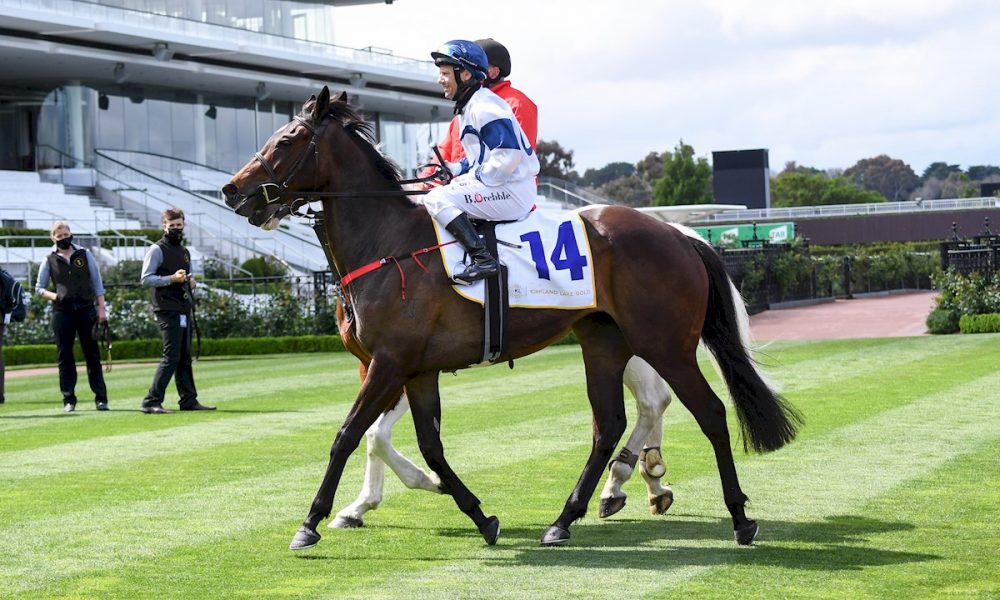 3 f Shamus Award – Sure You Can by O’Reilly

El Patroness (Shamus Award) set herself up for a possible Classic assignment at Flemington when she broke her maiden and earned black-type in the Super Impose Stakes (Listed, 1800m) at the big track last Saturday. The talented filly beat the boys in doing so and three days later she was included among the entries for not only the Kennedy Oaks (Gr 1, 2500m) but also the Victoria Derby (Gr 1, 2500m).

The Danny O’Brien-trained three-year-old scored at the third time of asking, having debuted with a solid third in a 1400-metre maiden at Sandown-Hillside in early August, followed by another third-place finish in a Benchmark 70 Handicap over a mile at the same venue on September 8.

Brett Prebble settled El Patroness outside the leader in the Super Impose, hitting the front at the 300-metre point before holding off the late challengers to score well. Among those she defeated to claim her first win were the well-regarded Mick Price and Michaell Kent jr-trained Gunstock (Tavistock), a closing third beaten a neck, and that colt’s stablemate Tiz Magic (Tavistock) who was a nose behind El Patroness in second.

“I was really pleased because she’s an out-and-out mile and a quarter filly. She’s run in two very slowly run events so far, and when he (Prebble) made it happen from the front, at least he made it a decent enough test,” O’Brien said.

“He used her up on the bit early, was left in front a long way from home, which is always a bit troubling here at Flemington. She’s done a great job for a filly having her third start to do it at both ends and hang on against the boys is a great effort. We opted to run against the colts at 1800 metres rather than a mile and really pleased that she’s on track. Hopefully, she is back here in a month’s time.”

The filly was bred by her owners, Balmarino Racing Partnership Trust and O’Brien Thoroughbreds, and is the first foal out of the three-time winner from 1600 to 2000 metres, Sure You Can (O’Reilly). O’Brien paid NZ$100,000 to secure Sure You Can at the NZB Premier Yearling Sale in 2012.

Sure You Can produced an unnamed Star Witness (Starcraft) filly in 2019 before a full-sister to El Patroness last year and was served by Puissance De Lune (Shamardal) in 2020. She is her sire Shamus Award’s (Snitzel) 16th individual stakes winner. The Rosemont Stud stallion has sired 149 winners of 421 races from 227 starters and stands at a 2021 fee of $33,000 (Inc. GST).