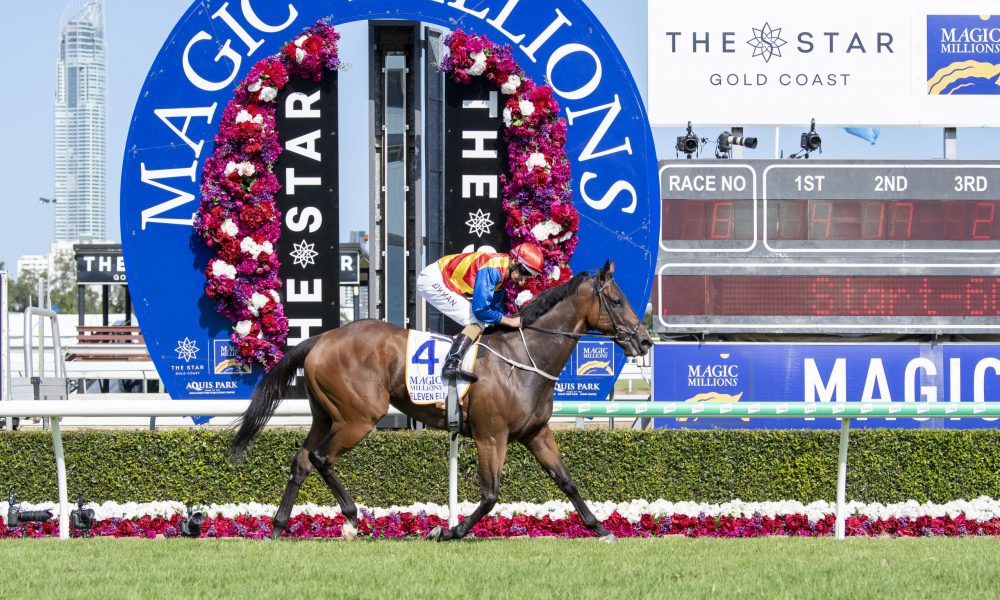 The Greg Hickman-trained Eleven Eleven (5 g Fastnet Rock – Smokin’ Alice by Smoke Glacken) successfully defended his Magic Millions Cup (RL, 1400m) title with a narrow victory in the 1400-metre race at the Gold Coast yesterday. Having his fourth start this preparation, the five-year-old son of Fastnet Rock (Danehill) stayed on strongly to snatch victory from Holyfield (I Am Invincible) in the shadow of the winning post, eventually beating him by nose with the same distance back to Apache Chase (Better Than Ready) in third. This was the third consecutive win at the Magic Millions raceday for Eleven Eleven, who also took out the Magic Millions 3YO Guineas (RL, 1400m) in 2020. Purchased by his trainer for $230,000 at the 2018 edition of the Magic Millions Gold Coast Yearling Sale from the Edinburgh Park draft, the five-year-old gelding has now won nine of his 27 starts for prize-money earnings of $2,862,470. Eleven Eleven is a brother to Listed-placed gelding War Memorial, with the pair being out of Smokin’ Alice (Smoke Glacken), who is herself a half-sister to Nothin But a Dream (First Defence), the dam of Group 2 winner and Group 1-placed Glenfiddich (Fastnet Rock).

Isotope (Deep Field), who nearly lost her battle with colic last year, showed her class when she recorded an impressive victory in the Magic Millions Snippets (1200m) at the Gold Coast yesterday. Exactly a year after the Tony Gollan-trained mare nearly fell and dropped jockey Ryan Maloney in the Magic Millions 3YO Guineas and several months after returning to work from colic surgery, the four-year-old showed she was back to something like her best when she sauntered to an easy length and a quarter victory over Tycoonist (Written Tycoon). The 2020 Magic Millions 2YO Classic (RL, 1200m) winner Away Game (Snitzel) finished another length further afield in third. Bought by her trainer, John Foote and Black Soil Bloodstock for $170,000 at the 2019 Magic Millions Gold Coast Yearling Sale from the Daandine Stud draft, Isotope is out of three-time winner Great Dansaar (Choisir) – herself a half-sister to dual Group 1 scorer Yankee Rose (All American) and Group 3 winner Miravalle (Redoute’s Choice). Foote and Black Soil Bloodstock, alongside Yes Bloodstock, reinvested into the family this week, paying Daandine Stud $300,000 for Isotope’s Spirit Of Boom (Sequalo) half-sister.

Following Isotope’s victory yesterday, Tony Gollan was quick to pay an emotional tribute to the four-year-old mare. “Fresh-up from colic surgery, 32 weeks or more weeks between runs and she’s done an amazing job,” the winning trainer said. “We had to ride her aggressively to get across from our barrier but she’s just such a good horse. She’s so special to our stable and all the connections. She does have a habit of being a bit tardy out of the gates and if she did that today it was going to make it a really tough ride for Ryan (Maloney) but once she stepped out of the gates, she broke best of anything, the plan was to be really aggressive on her. We’ve ridden some highs with her and then the lows like Magic Millions day last year. Things started to get back on track in Sydney and then she nearly died on us so to have her back here today is a little bit of justice for last year. You’ll see her in Sydney in the autumn, I can’t wait to take her away again. She can do anything in this next year.”

Having finished third in last year’s running of the Magic Millions Fillies and Mares (1300m), the Ciaron Maher and David Eustace-trained Snapdancer (Choisir) atoned for that defeat when landing this year’s edition at the Gold Coast yesterday. The five-year-old mare was recording her first victory since her win in a Benchmark 88 (1200m) at Randwick in December 2020 as she beat Vulpine (Snitzel) by a length and three-quarters. Kiku (Zoustar) was a further half a length back in third. Snapdancer was snapped up by Seamus Mills as a weanling at the Inglis Chairman’s Sale in 2017, before being purchased by Brad Spicer and former trainer Darren Weir for $180,000 at the Magic Millions Gold Coast Yearling Sale the following year from the Sledmere Stud draft. The mare is one of six winners out of the Irish-bred Galileo (Sadler’s Wells) mare Snapdragon.

Well-bred Navy Cross (I Am Invincible) added a sixth win to his record when he landed the Magic Million Subzero (2400m) at the Gold Coast yesterday. The Gai Waterhouse and Adrian Bott-trained gelding stayed on well to beat Outlandos (Dissident) by a length, while Rebel Rama (Dissident) was a further neck back in third. A $700,000 purchase by Gai Waterhouse, Adrian Bott and Blue Sky Bloodstock at the 2018 Gold Coast Yearling Sale, Navy Cross is out of Watchful (Danehill) – the dam of six winners, headed by multiple Group 1 winner Sepoy (Elusive Quality) and Group 2 scorer Mulaazem (Dubai Destination). Bott said it was a case of Navy Cross encountering the perfect race shape and track conditions. “That’s Tim (Clark) at his best and we were fortunately able to see the horse under the right conditions,” Bott said. “He takes a few runs to get to where he needs to be in his condition and a few times that we’ve seen him under those conditions we’ve had heavy tracks. There’s only a small window where you can get it right with him and fortunately all the conditions fell our way today.”

Bigboyroy bolts in on Coast

A long-range plan to get Bigboyroy (Dissident) to the Gold Coast for a tilt at the Magic Millions raceday paid dividends yesterday when the Chris Waller-trained gelding overpowered his rivals in the Magic Millions Open (1800m) at the Gold Coast. Having failed to get his head in front since December 2020, the five-year-old gelding stole a four-length margin at the top of the straight and maintained a strong gallop to the winning post, easily defeating stablemate Wheelhouse (Pierro) by three and three-quarter lengths. Love Tap (Tapit) was another length and a half away in third. The gelding – who was purchased by Guy Mulcaster for $120,000 at the Magic Millions Gold Coast Yearling Sale in 2018 – has now won five of his 29 starts, accumulating $585,415 in prize-money in the process. Bigboyroy is the only winner out of the Listed-placed winning mare Follonica (Flying Spur).

Wisdom Of Water continues in the winning groove

Having snapped a long losing streak when landing the Magic Millions Wyong 3YO & 4YO (1200m) on December 15, talented Wisdom Of Water (Headwater) continued in the winning groove when he took out the Magic Millions QTIS (1300m) at the Gold Coast yesterday. Trained by Annabel Neasham and ridden by Rachel King – who has struck up a great partnership with the quirky entire – Wisdom Of Water sprinted away to post a dominant length and a quarter win over Boomnova (Spirit Of Boom). Chapter And Verse (Rothesay) was a further neck further back in third. Originally a $70,000 purchase by Stuart Boman of Blandford Bloodstock out of the Eureka Stud draft at the 2019 Gold Coast Yearling Sale, Wisdom of Water was later acquired by Aquis after showing talent as a two-year-old. The four-year-old has now won five of his 20 starts, which has seen him pocket $1,074,950 in career prize-money.

Co-trainers Peter and Paul Snowden won their third Magic Millions Maiden Plate (1200m) in seven years when Warmth (Hinchinbrook) scored in yesterday’s $250,000 contest at the Gold Coast. Having finished second in all three career starts at Wyong, Goulburn and Gosford, the four-year-old mare finally got her head in front when she defeated her stablemate Devil’s Throat (Snitzel) by head with Ambitious Spirit (Spirit Of Boom) a further half a length away in third. Purchased by part-owners Newgate Farm and Stonestreet Stables for $525,000 at the 2019 Magic Millions Gold Coast Yearling Sale, Warmth is out of Listed winner Ultimate Fever (Gold Fever), making her a three-quarter brother to Group 3 winner Sprightly Lass (Snitzel) and Listed scorer Le Corden Bleu (Snitzel). “It’s been a long time coming, she’s finished behind some horses that have gone on and figured in some nice races,” said Paul Snowden. “We were pretty confident about her chances today off the good draw.”