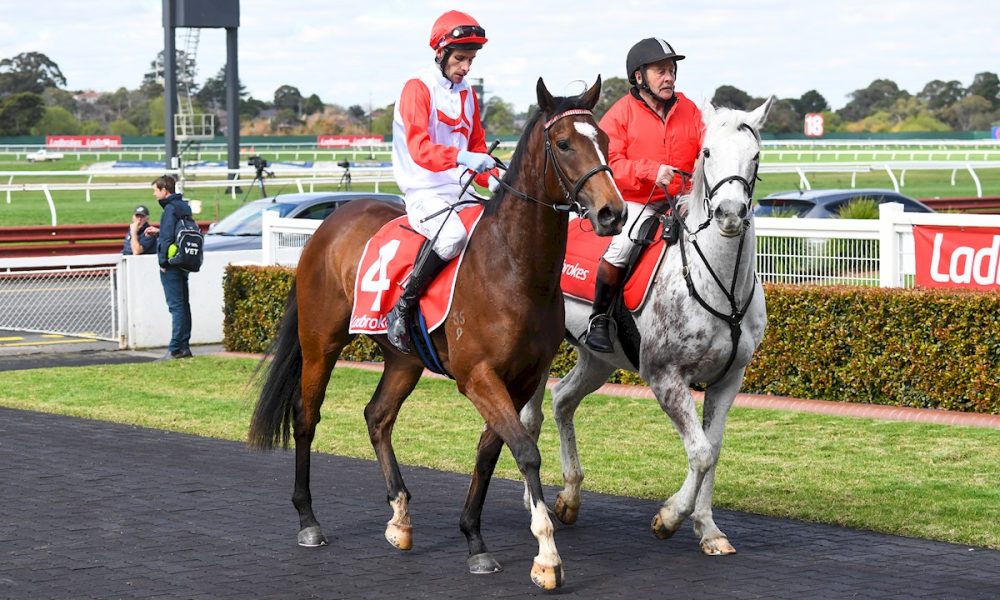 3 g All Too Hard – Sherbet Bomb by Snitzel

B: Platinum Breeding and Racing

Elkington Road (All Too Hard) created a lasting impression when he produced a scintillating turn of foot to win a five-runner 1200-metre maiden at Sandown–Lakeside on Wednesday.

Providing Mike Moroney with another three-year-old midweek winner in August, the son of Vinery Stud stallion All Too Hard (Casino Prince) came from third to first in a matter of strides under Jamie Mott before careering away to beat Ferrari Man (Menari) by a widening two and a quarter lengths at the line. Nicodemus (Impending) was a further three-quarters of a length back in third.

“Even though it was a small field, it was an impressive win,” Mott said. “He is a horse that is still very raw.

“He began a little too quickly and wanted to run through the bridle. They didn’t go at hectic speed, but I let them go and got into a good rhythm.

“I had a look coming into the straight, everything was under pressure, and I was cantering.”

Bred by Roger Sousa’s Platinum Breeding and Racing, Elkington Road was pinhooked for $100,000 as a weanling before being sold for $240,000 to Paul Moroney Bloodstock when offered by Northmore Thoroughbreds at last year’s Inglis Premier Yearling Sale.

A half-brother to the Group 3-placed winner Rocket Fuel (Smart Missile), Elkington Road is the fourth winner from as many foals out of the winning Snitzel (Redoute’s Choice) mare Sherbet Bomb.

Sherbet Bomb has a yearling colt by Pride Of Dubai (Street Cry) and visited Bivouac (Exceed And Excel) last spring.