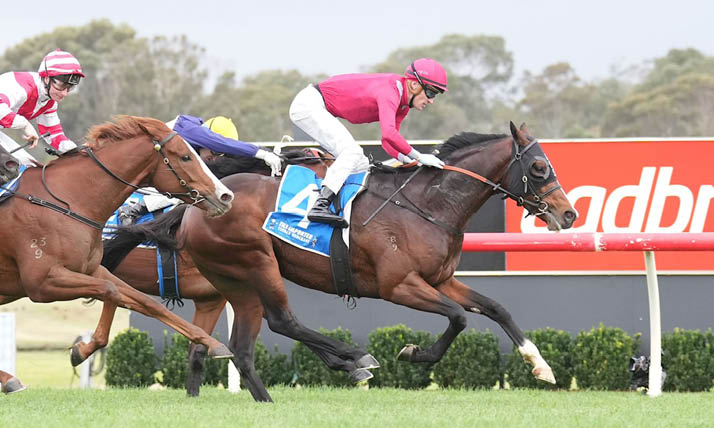 Trainers Anthony and Sam Freedman could have another stakes colt to go to battle with this spring after Elliptical (Dundeel) produced the perfect debut performance at Sandown-Lakeside on Wednesday.

Ridden by Mark Zahra, the two-year-old settled outside the pace before making his challenge at the 200-metre pole. He took a little time to wind up but finished the race in full control, shaping as a promising middle distance horse, to beat Dashing (Magnus) by three-quarters of a length with long-time leader Concentric (I Am Invincible) a head further back in third.

The Freedmans are now likely to give the colt, who is owned by a partnership that includes Cambridge Stud’s Brendan and Jo Lindsay, the chance to emulate fellow son of Dundeel (High Chaparral) and stable star Super Seth, who won the Caulfield Guineas (Gr 1, 1600m) in his three-year-old season.

“You dream of going to a Caulfield Guineas with a horse like him with his pedigree,” Sam Freedman told Racing.com. “So, we’ll target that sort of race with him at the start of spring.

“He is a high-priced colt with very good ability, which he is holding back a touch. He’s had a lengthy preparation with three solid trials, and he’s earned a break now.”

Group 1-winning jockey Mark Zahra felt that the son of Dundeel was green in the running, but has always shown a fair amount of ability.

“He’s always had the ability; he’s just been quite green,” Zahra said. “He hit the front easily enough, but when he got there, he didn’t know what to do; he had his ears pricked.

“I just wanted to lean in on Craig [Newitt’s horse Concentric], so he could see him with the blinkers. Once he saw him, he did enough all the way to the line.”

He is the second foal and first runner out of the winning Testa Rossa (Perugino) mare Marquise Da Rossa, who was covered by So You Think (High Chaparral) last spring and has had her last three foals sold by Phoenix Broodmare Farm to the National Weanling Sale.

Tasman Bloodstock purchased her Grunt (O’Reilly) colt in 2021 for $40,000. This year, Suman Hedge Bloodstock paid $120,000 for her Castelvecchio (Dundeel) filly at last month’s Magic Millions National Weanling Sale, while Freedman Racing and Julian Blaxland Bloodstock went to $180,000 for the Grunt colt consigned by Coolmore Stud at the Gold Coast Yearling Sale in January this year.