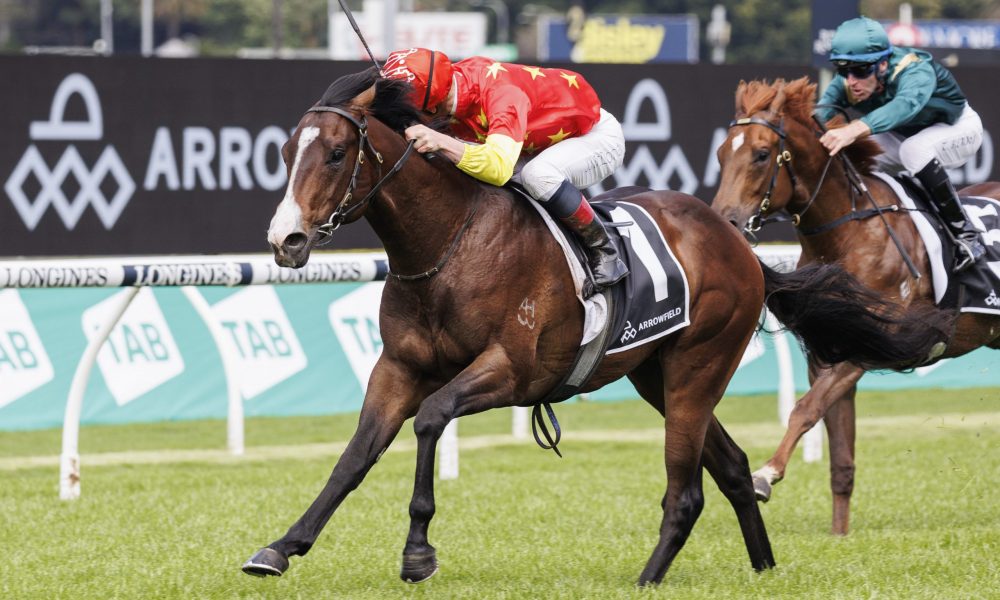 Peter and Paul Snowden, another renowned partnership for producing high class two-year-olds, captured their third win in the Breeders’ Plate (Gr 3, 1000m) when the Newgate Farm and China Horse Club-owned colt Empire Of Japan (2 c Snitzel – Ichihara by General Nediym) struck for an impressive success in the season-opening juvenile contest.

In an open betting market, Empire Of Japan was sent off the $5.50 third favourite, but the result proved anything but open, as the son of Snitzel potently put the race to bed with a dynamite turn of foot.

Travelling at the rear of the eight-runner field having jumped from barrier eight under James McDonald, Empire Of Japan moved off heels passing the 400-metre mark, and once fully into stride the colt breezed past $4.60 favourite Physical Graffiti (Russian Revolution) before reeling in the James Harron-owned colt Mach Ten (Exceed And Excel) to become the 125th individual stakes winner for Arrowfield Stud’s Snitzel (Redoute’s Choice).

Mach Ten held on for second, three lengths from the winner, with Physical Graffiti a length further back in third and the winner’s stablemate Make A Call (Extreme Choice) in fourth.

Empire Of Japan finished an eye-catching second to fifth-placed Flying Trapeze (Trapeze Artist) at the Randwick trials Monday week ago.

“I think the writing was on the wall at the trials the other day. Just how relaxed he was and how well he hit the line,” said Paul Snowden, who trained Capitalist (Written Tycoon) to win the 2015 running of the Breeders’ Plate, before claiming the Golden Slipper in March.

“Obviously, when you draw out there on the wing you are dictated to a wee bit and what happens inside you.

“But knowing the fact he goes back and gets a bit of cover, and he hit the line as good as what he did the other day, it certainly gave us a bit of confidence here today.”

The result also delivers on the potential of Corumbene Stud-owned broodmare Ichihara (General Nediym), whose $2.8 million son Mount Fuji (Snitzel), trained by the Snowdens, failed to live up to his lofty price tag.

Empire Of Japan, who was a $680,000 buy for Newgate Farm, China Horse Club and Starlight, is the fourth named foal from the mare, who herself is a sister to Listed winners Au Chocolat and Isurava, the latter the dam of Run To The Rose (Gr 2, 1200m) winner and Corumbene Stud-based stallion Menari (Snitzel).

“He’s still got a long way to go, like a lot of horses in this race today,” Snowden said.

“It’s just the mental aspect of things that has been missing in this breed for a little while, especially the dam’s side.

“It’s the second horse we’ve had out of this [mare] and it was pretty evident [Mount Fuji] lacked a little bit of ability but this bloke makes up for that and he’s heading in the right direction.

“This horse isn’t screwed down at all for today’s event, what you see is what you get with him, he’s got a fair bit of ability and he’s got a good turn of foot.”

Ichihara has a yearling colt by Exceed And Excel (Danehill) but slipped with her last cover.