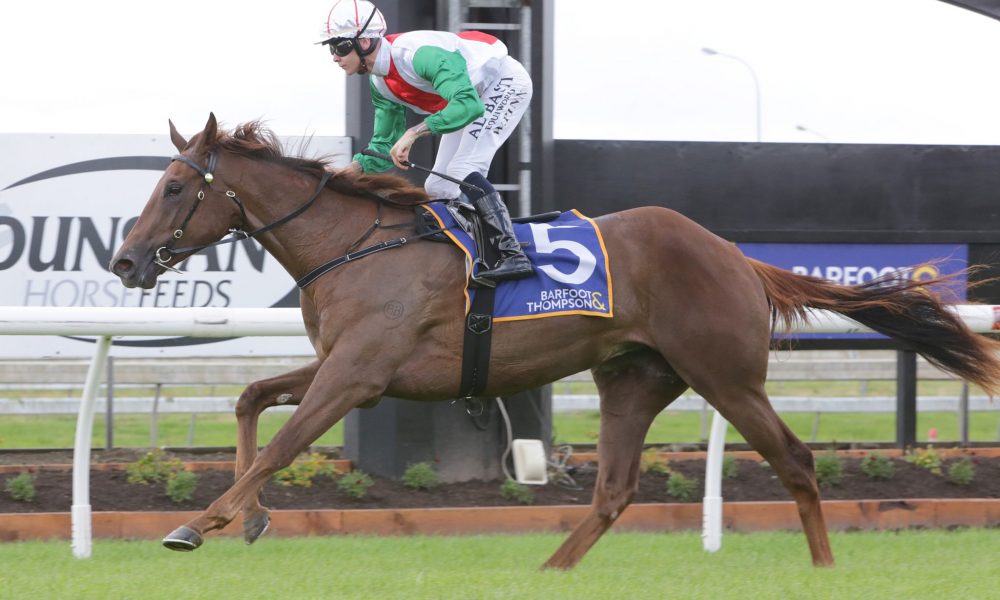 Ethereal Star (Snitzel) created a big impression last weekend as she scored in stakes company on just her second career outing when landing the Challenge Stakes (Listed, 1100m) at Pukekohe.

Having produced a debut effort full of promise when coming home well for second, beaten a length, in a 1000-metre contest at Te Rapa on November 5, the two-year-old filly showed the benefit of that experience and continued the excellent form of her trainer Andrew Forsman.

Ridden by Wiremu Pinn, who picked up the mount after scheduled jockey Ryan Elliot withdrew from his rides on the day, the daughter of Snitzel (Redoute’s Choice) ran three-wide throughout after a slow start but came with a strong run on the outside of her seven rivals, taking the lead inside the final 150 metres, clearly appreciating the extra 100 metres, to come home a one and three-quarter length victor over Balance Of Power (Almanzor).

The pair finished four and three-quarter lengths ahead of Luberon (Embellish) in third, with the win comfortably qualifying Ethereal Star for the $1 million Karaka Million 2YO (RL, 1200m) at the same venue on January 21.

“You are always nervous when the track is the way it is [Heavy 9] and you don’t know whether they are going to handle it, but there were only seven runners and black type was up for grabs,” Forsman said.

“She was going to go for a spell whatever happened, so it was great to see her win like that.

“Provided she comes through this well, she won’t need another run before the Karaka Million.”

Bred by Lib Petagna under his JML Bloodstock banner, Ethereal Star was a $600,000 purchase out of the Blandford Lodge draft by Forsman in conjunction with agents Andrew Williams and Bevan Smith during Book 1 of this year’s NZB Karaka Sale in March.

The only winning foal out of the dual Group 3-winning Makfi (Dubawi) mare Eleonora, who also placed in the 2016 VRC Oaks (Gr 1, 2500m), Ethereal Star comes from an extended family that includes three-time Group winner Supera (Savabeel), while she is also the great granddaughter of the four-time Australian Group 1 winner Ethereal (Rhythm).