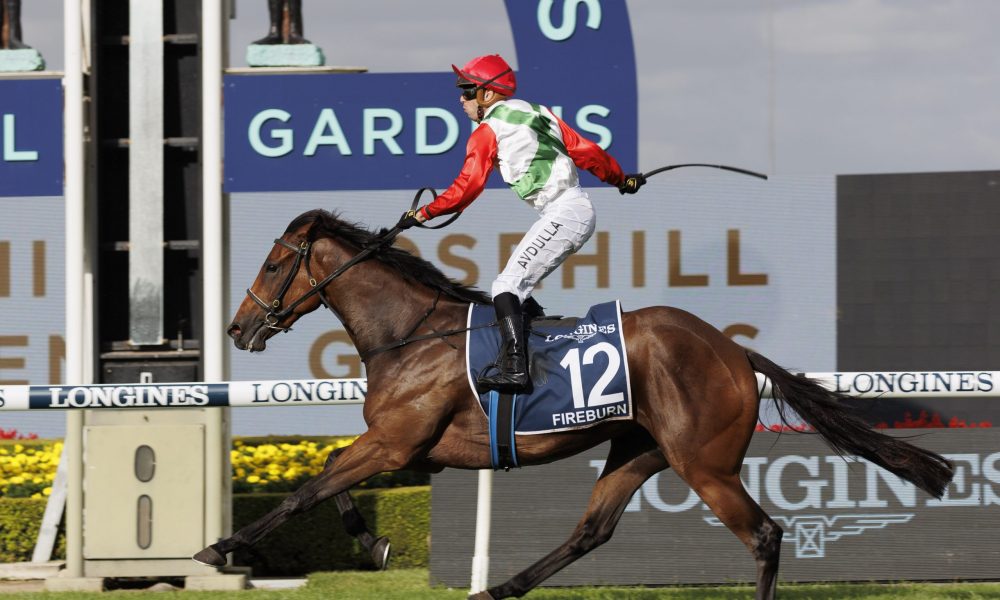 The question as to where Rebel Dane (California Dane) will cover his next book of mares undoubtedly intensified yesterday as the sire’s career in the breeding barn reached fever pitch when his talented daughter Fireburn produced a mind-blowing performance to win the Golden Slipper Stakes (Gr 1, 1200m) at Rosehill, handing the often overlooked stallion his first Group 1 winner.

Like her dual Group 1-winning sire Rebel Dane, Fireburn carries the silks of Louis Mihalyka’s Laurel Oak Bloodstock and is also, like her father, trained by Gary Portelli.

The Warwick Farm handler was understandably ecstatic to add a second win in the showpiece Group 1 to his CV, having saddled She Will Reign (Manhattan Rain) to victory in similar conditions in 2017.

“She is the best two-year-old in Australia right now and I’ve got no doubt she will be the best three-year-old next year.”

The chance of victory in the $5 million juvenile feature looked slim in the early stages when Fireburn was dramatically bumped at the halfway stage, nearly dislodging jockey Brenton Avdulla and causing her to be shuffled to the back of the pack.

Portelli, who also had ninth-placed Sejardan (Sebring) in the race, admitted he had prematurely conceded defeat, until he noticed her steaming home in between runners.

“I thought, ‘we are out of play, this is not our year’,” Portelli said.

“Then I saw her colours starting to sneak through and when she decides she is going to get you, she gets you. She has such a big motor.”

The filly, unlike many of her rivals, relished the Heavy 9 conditions and was able to weave through rivals in the final 300 metres, eventually bursting from the pack to claim victory by a comfortable two and a half lengths, handing recent Silver Slipper Stakes (Gr 2, 1100m) winner Best Of Bordeaux (Snitzel) his first defeat as the Kacy Fogden-trained finished second.

Coolangatta (Written Tycoon), who was sent off the $3.70 favourite, also surrendered her unbeaten record, finishing another neck away in third and she was a length ahead of last month’s Blue Diamond Stakes (Gr 1, 1200m) winner Daumier (Epaulette), who finished fourth.

“Congratulations to (managing owner) Louis Mihalyka and the team, I am forever thankful to them for giving me Rebel Dane to start with and then a daughter of his and it just continued the great story,” said the trainer.

“She has been the biggest improver in the stable that I’ve ever seen. I said this week she has peaked so well.

As with Portelli, Fireburn also gave jockey Brenton Avdulla his second Golden Slipper after his success on Estijaab (Snitzel) four years ago and capped a remarkable rise back to the top.

The jockey missed the entire spring carnival, spending six months on the sidelines with a neck injury, and has been working hard to regain a footing in the competitive Sydney jockey ranks.

“I said to the ‘Mrs’, I wouldn’t cry after the first week (back) but it’s very special obviously,” said Avdulla, who added an 11th career elite-level win to his tally, and second this season, having steered Hinged (Worthy Cause) to victory in the Surround Stakes (Gr 1, 1400m) on February 26.

“There was a massive shuffle up when we got out of the chute and we all but sold out and I thought ‘well there’s our race over’.

“So I just tried to balance her up, try and get her sorted so she could earn a bit of prize-money for connections.

“I just had to duck and weave a bit and when she came off Best Of Bordeaux’s heels it was race over.”

After being beaten into fourth at Warwick Farm on debut over 1100 metres, the juvenile landed her next two starts, before securing her spot in the Slipper with a victory in the ballot-exempt Sweet Embrace Stakes (Gr 2, 1200m) at Randwick on February 26. In winning the Group 2, Fireburn becomes only the fourth filly to complete the Sweet Embrace-Golden Slipper double and the first since Crystal Lily’s (Stratum) win in 2010.

Bred by Laurel Oak Bloodstock, Fireburn (2 f ex Mull Over by So You Think) is the first winner out of winning So You Think (High Chaparral) mare Mull Over, who is herself out of dual Listed winner Galizani (Galileo). The filly descends from her third dam, Flight Stakes (Gr 1, 1600m) winner Danarani (Danehill).

Mull Over has a yearling colt by Hallowed Crown (Street Sense) and she was covered by Pierata (Pierro) last spring.

The victory also handed Coolmore Stud-based stallion So You Think (High Chaparral) his first Group 1 winner as a broodmare sire, with Fireburn his only stakes winner. For a relatively young stallion, So You Think’s broodmare statistics are high-class, with the daughters of So You Think having produced six winners from 14 runners.

Rebel Dane’s stud career has been far from straightforward. Starting in 2017, Rebel Dane stood his first two seasons at Victoria’s Swettenham Stud and lured books of 36 and 31 mares, at service fees of $12,500 (inc GST) and $9,900 (inc GST) respectively.

However, last month there was a further twist in the tale for Rebel Dane when Grant and Lowe informed Glen Eden Stud co-owner Rory O’Brien they would be moving the rising 13-year-old stallion north to New South Wales in order to further his career and there is no greater endorsement for his growing reputation as a brilliant stallion than adding a Golden Slipper winner to his CV.

Despite his limited opportunities, Rebel Dane’s numbers make for impressive reading. The stallion has sired six winners from 14 starters at a strike rate of 42.9 per cent. Meanwhile, with two stakes winners to his name, Rebel Dane’s stakes-winners-to-runners ratio sits at an astonishing 14.3 per cent.

A decision on where Rebel Dane continues his career as a stallion is yet to be made, but after yesterday’s win for Fireburn, there is no doubt the well-known, powerhouse farms will be throwing their hats into the ring for the right to stand the son of California Dane (Danehill) at their studs.