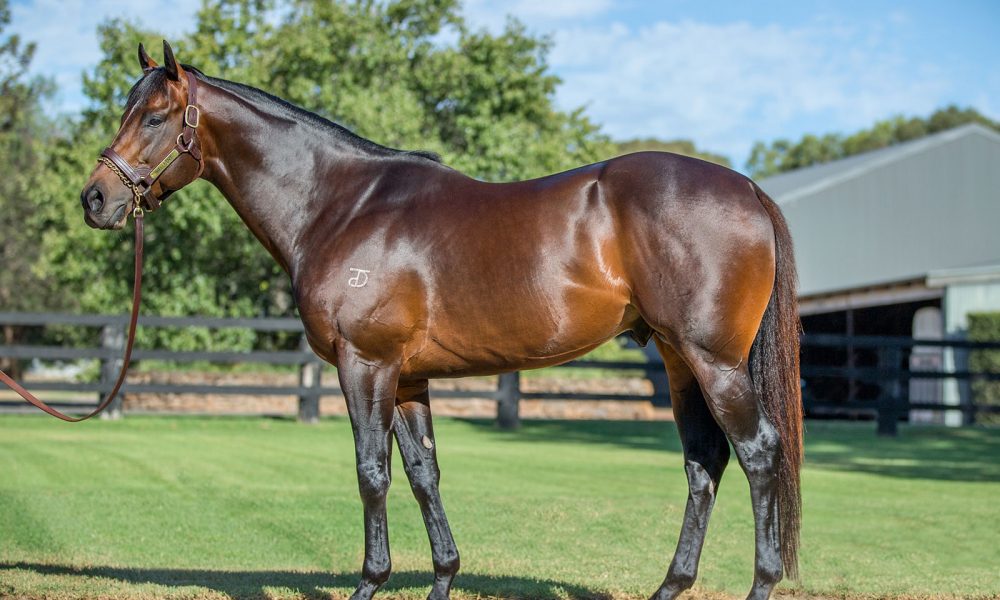 New winners
Hellbent (pictured) – Miss Hellfire (2 f ex Peace Time by War Front) provided her sire Hellbent (I Am Invincible) a first winner when she won the Aquis Gold Pearl (1100m) in good style at the Gold Coast on Saturday. The Peter and Paul Snowden-trained filly was second behind Soaring Ambition (Not A Single Doubt) on debut in the Wyong Magic Millions 2YO Classic (RL, 1100m) and improved on that impressive performance to strike here under Ben Thompson. The two-year-old surged clear in the closing stages to beat Perfect Mission (The Mission) by three-quarters of a length with a further length and a quarter further back to Stroll (Snitzel) in third. A $60,000 Magic Millions purchase from the Newgate Farm draft for owners Triple Crown Syndications, the filly is a half-sister to the ill-fated stakes-winner Xtremetime and the US Group 1-placed colt Caracaro. Hellbent stands at Yarraman Park for a fee of $22,000 (inc GST).

Invader – After showing promise in both his trials to date, the Sarah Acornley-trained Red Hot Poker (2 g ex Radiator by Mossman) made a successful debut in the Brown Brothers Handicap (1000m) at Townsville on Saturday, handing Aquis Farm-based first season Invader (Snitzel) a fourth individual winner in the process. The two-year-old gelding defeated Altar Boy (The Mission) by a nose with just a neck back to Queen Nola (Lord Of The Sky) in third. The son of Invader looks an investment well-made as he cost $4,500 at the Inglis May (Early) Online Sale last year for Journeyman Lodge out of the Aquis Farm consignment. Red Hot Poker is a half-brother to the winner Mirror Model (Sepoy). Invader currently stands at Aquis Farm for a fee of $22,000 (inc. GST).

Satono Aladdin – Kabugee (2 g ex Kabuki by Shinko King) looked a nice prospect in the making when winning at Te Aroha on Monday over 1000 metres, providing his sire Satono Aladdin (Deep Impact) with his first New Zealand-bred winner. Sent off as the short-priced $1.40 favourite, the Jamie Richards-trained two-year-old was settled three-back on the fence under Opie Bosson after starting a little slowly from the barriers. Angled out to get clear running in the straight, Kabugee careered away from his rivals to beat Contagious (Proisir) by two lengths with a further head back to Speedrun (No Nay Never) in third. The fourth foal out of winning mare Kabuki (Shinko King), Kabugee is a half-brother to winner Akerra (Ekraar). Satono Aladdin stands at Rich Hill Stud for a fee of $12,500 (plus GST).

Spieth – Jaguar Stone (2 f ex Leopard Skin by Tale Of The Cat) scored on debut at Hobart on Friday to give Aquis Farm’s first-season sire Spieth (Thorn Park) his first success. The stallion’s first-crop yearlings sold for up to $180,000 last year and Jaguar Stone was purchased by her trainer and part-owner Adam Trinder for $28,000 out of the Berkeley Park Stud daft at the Magic Millions Gold Coast Yearling Sale. Jaguar Stone displayed a smart change of pace under apprentice Erika Byrne Burke to win the Unique Doors and Windows Maiden (1000m) by two lengths from Decisive Choice (Decides) with Bold Instinct (Impending) a half-length back in third. Jaguar Stone’s dam Leopard Skin is out of the two-time Listed winner La Chasseuse (Lion Hunter). Spieth sired his second individual winner in as many days after Wild Botanica (2 g ex Colosimo by Foxwedge), deemed good enough by trainer Kacy Fogden to contest the ATC Gimcrack Stakes (Gr 3, 1000m) in the spring, broke through for her maiden victory at Ipswich. Having her third start, Wild Botanica surged clear to defeat Mishani Embrace (The Mission) by one and a quarter lengths in the 2YO Maiden Plate (1200m). Spanish Angels (Sidestep) ran third. Wild Botanica, who was runner-up at the Gold Coast on Boxing Day, was a $4,000 purchase at last year’s Magic Millions National Yearling Sale. Her dam Colosimo (Foxwedge) was purchased by Avesta Bloodstock’s Jimmy Unwala for $20,000 at last year’s Inglis Australian Broodmare Sale and was covered by Coolmore’s first season sire King’s Legacy (Redoute’s Choice) last September. Spieth stands at a fee of $8,800 (inc. GST).

Artie Schiller – Trainer Matthew Brice O’Connor earned his first black-type victory by turning US$25,000 claim Clear Vision (6 g ex Refreshing by Invincible Spirit) into a graded winner when the gelding struck in Saturday’s Tropical Turf Stakes (Gr 3, 8f) at Gulfstream Park. The six-year-old was winning for the sixth time in 19 starts as he drew clear to defeat Value Proposition (Dansili) by two lengths, and in the process became the 56th individual stakes winner for the now Victoria-based stallion Artie Schiller (El Prado). Belgrano (War Front) was a further length and three-quarters away in third. Bred in Kentucky by Candy Meadows, Clear Vision is the first foal out of the Invincible Spirit (Green Desert) mare Refreshing. The mare has three winners from as many starters as well as a two-year-old Maclean’s Music (Distorted Humor) colt named Yes Mo and a yearling Catholic Boy (More Than Ready) colt. Refreshing sold in foal to War Of Will (War Front) for US$52,000 at the 2021 Keeneland November Breeding Stock Sale. Breeders Cup Mile (Gr 1, 8f) winner Artie Schiller stands at Stockwell Thoroughbreds for $11,000 (inc GST).

Denman – Twin Hills Stud stallion Denman (Lonhro) secured his 17th individual stakes winner as a sire when his son Prime Candidate (7 g ex Coolroom Candidate by Mister C) landed the Christmas Classic (Listed, 1200m) at Canterbury on Friday. Prime Candidate led the field off the home turn under Jason Collett and held at bay his pursuers to win by a length and a quarter from the second-placed Special Reward (Demerit) with Through The Cracks (Wanted) a further neck behind in third. Prime Candidate is out of the 2006 Sapphire Stakes (Gr 2, 1200m) winner Coolroom Candidate (Mister C) who has also produced the Listed winner and Group 3-placed Coolring (Sebring) among her five winners. The mare has a Denman two-year-old filly and a yearling colt by the same sire. Denman stands at a fee of $8,800 (inc. GST).

Pioneerof The Nile – The late Pioneerof The Nile (Empire Maker) sired his 40th individual stakes winner when Under The Stars (3 f ex Untouched Talent by Storm Cat) saw off a determined bid from Awake At Midnyte (Nyquist) to take out the Santa Ynez Stakes (Gr 2, 7f) at Santa Anita on Saturday. Trained by Bob Baffert for the Coolmore partners, Under The Stars was winning for the second time in her four starts to date as triumphed by three-quarters of a length, the front two pulling six and a half lengths clear of the third home, Miss Mattie B (Tonalist). The daughter of the Storm Cat (Storm Bird) mare Untouched Talent is a half-sister to Baffert’s Grade 1 winner and 2012 Kentucky Derby (Gr 1, 10f) and Preakness Stakes (Gr 1, 9.5f) runner-up Bodemeister (Empire Maker), now a stallion in Turkey. She is the ninth of 11 foals from her dam and her second Graded stakes winner. The Grade 1-placed Untouched Talent’s most recent foals are two-year-old and yearling colts by Triple Crown-winning shuttler Justify (Scat Daddy).

Savabeel – Australian Derby (Gr 1, 2400m) runner-up Zebrowski (5 g ex Polish Princess by Polish Precedent) continued his good start to life in Hong Kong when he struck in Wednesday’s January Cup (Gr 3, 1800m) at Happy Valley and in so doing provided Savabeel (Zabeel) with his 124th individual stakes winner. Formerly in the care of Team Hawkes, the now Casper Fownes-trained five-year-old justified his position as market leader when he stayed on well to defeat Sunny Star (Flatter) by a length and a quarter. Savvy Nine (Anodin) was a further length away in third. Stakes placed three times prior to export, Zebrowski has now won as many times in Hong Kong as he did in Australia. Seven-time Champion New Zealand Sire Savabeel stands at Waikato Stud where his 2021 fee was listed at $100,000 (plus GST).

So You Think – So You Win (7 g ex Rhode Island Red by Tale Of The Cat) gave sire So You Think (High Chaparral) a 38th individual stakes winner as he bagged his biggest success to date in the January Cup (Listed, 2000m) at Rosehill on Saturday. Trained by Chris Waller, the seven-year-old gelding had a two-way battle at the finish with stablemate Mubariz (Dansili) and managed to come out on top by just over a quarter of a length. The pair pulled well clear of the third Attorney (Makfi) who was nearly five lengths further adrift. A $220,000 purchase by Chris Waller Racing out of the Hallmark Stud consignment at the NZB Premier Yearling Sale in 2016, So You Win is the fourth foal out of Tale Of The Cat (Storm Cat) mare Rhode Island Red. He is a half-brother to winners Phar From Over (Dylan Thomas), Rhode Assassin (Lookin At Lucky) and Zou Island (Zoustar). So You Think stands at Coolmore for a fee of $77,000 (inc GST).