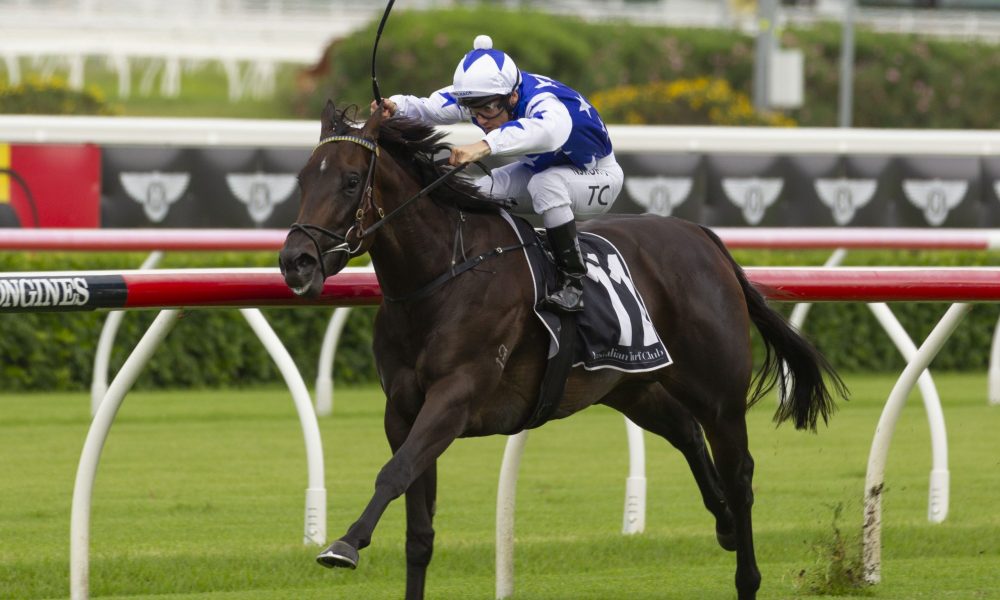 Options remain open for valuable stakes-winning mare Villami (Foxwedge) while connections of talented three-year-old stablemate Peltzer (So You Think) see no reason to change course after the colt’s performance in Saturday’s Run To The Rose (Gr 2, 1200m).

Trained by Gerald Ryan and Sterling Alexiou, Villami made her first public appearance for the spring when winning a Rosehill barrier trial yesterday but as to when she will be seen next, part-owner David Raphael is unsure.

“She always works well, she relaxed a bit better, and good horses trial well and that’s what she did. There’s nothing over the top and she just goes out and does it – she’s a good filly,” was Raphael’s assessment of Villami’s trial yesterday.

“She’s a class horse and she just dropped her head and travelled well. She’s got a very set pattern and there’s no change with her and we’re not trying to stretch her out over more ground as she’s not a miler, she’s a sprinter.”

Villami defeated Belluci Babe (Per Incanto) by a long head in heat five over 900 metres, running 53.47 seconds. Harto (Fastnet Rock) was two and a quarter lengths away in third.

“We will just cruise for the next few days and then decide what we do, but there’s not actually a lot of races for her up here in Sydney if you want to stick to fillies and mares races,” he said.

“You just have to wait and see where everyone’s going, to be quite truthful. There’s not a lot of logical options for her.”

A $425,000 Magic MIllions Gold Coast Yearling Sale purchase from Cressfield in 2018, Villami has won twice from 11 starts, including the Fireball Stakes (Listed, 1100m) in March, but her record could have been significantly better, according to Raphael.

“The good filly of Gerry Harvey’s (Libertini) beat us one day by a half-head when we were 20-1 and she was even-money,” he said.

“In her first prep, we weren’t able to get out behind Anaheed so we possibly could have beaten her and Flit (in the Percy Sykes). She may have had three more Group wins.”

While plans are up in the air for Villami, the picture is clearer for stablemate Peltzer, a colt also part-owned by Raphael, who will continue on to the Golden Rose Stakes (Gr 1, 1400m) on Saturday week.

Peltzer became one of the most talked about two-year-olds during the winter after an unbeaten three-run preparation, culminating in a four-length demolition at Randwick on May 23.

Resuming this campaign, Peltzer was runner-up in the San Domenico Stakes (Gr 3, 1100m), a race run at a fast tempo set by Anders (Not A Single Doubt), before running fourth in a hecticly run Run To The Rose at Rosehill at the weekend.

The unplaced run was no cause for concern for Ryan or Alexiou and Raphael said feedback from Peltzer’s jockey Kerrin McEvoy was also encouraging.

“At the moment, we’re full steam ahead. There’s been no discussion about changing plans and we’re sticking to it,” the former race caller and media commentator said.

“It looked like he’d improved from first-up and anyone who saw him in the paddock (mounting yard) would agree and he’ll be ready third up. It’s not that he wasn’t fit, but you know what I mean.

“Everything’s gone perfectly this prep, expect for the way the races have been run.”

The colt was forced to chase Anders first-up while he also raced close to the tempo set by Farnan (Not A Single Doubt) last start.

“All of us that are in tune with our horse are very happy. It was interesting that people were expecting so much more of him first-up, but I don’t think he underachieved and everyone was expecting so much of him second–up and Rothfire’s performance was extraordinary,” he said,

“Rothfire will be favourite and he deserves to be on what he did the other day but we all know favourites don’t win every race. Peltzer was second-up and Rothfire has to do it second–up.”

Whether Peltzer heads to the Caulfield Guineas (Gr 1, 1600m) or is freshened up for a tilt at the Coolmore Stud Stakes (Gr 1, 1200m) will not be known until after the Golden Rose.

“We are just going to get to the Golden Rose before we start working out if we’re turning left or right,” he said.

“He’s had two really hard runs and the fact that a couple of those others who had a gut-buster first–up in Mamaragan and a couple of others, they haven’t performed to the same level second–up, but our horse did.”

Raphael is hopeful that the depth of his on-track team of Peltzer and Villami can be added to this season after securing shares in two high-priced colts.

Raphael’s syndicate bought into the Edinburgh Park-bred and sold $1 million Exceed And Excel (Danehill) colt out of Smokin’ Alice (Smoke Glacken) from the Magic Millions sale in January and dug deep again in July at the Inglis Easter Round 2 auction to buy into a son of I Am Invincible (Invincible Spirit),

The Bhima Thoroughbreds-consigned colt, who made $700,000, is the third foal out of Miss Atom Bomb (Encosta De Lago), the half-sister to Winx (Street Cry) and Group 3-winning sprinter El Divino (Snitzel).

Both colts are in training with Ryan and Alexiou.

Raphael indicated that the pair, who are currently in work, were likely to soon head to the paddock for a break rather than be pushed to make the ATC Breeders’ Plate (Gr 3, 1000m) at Randwick on October 3.