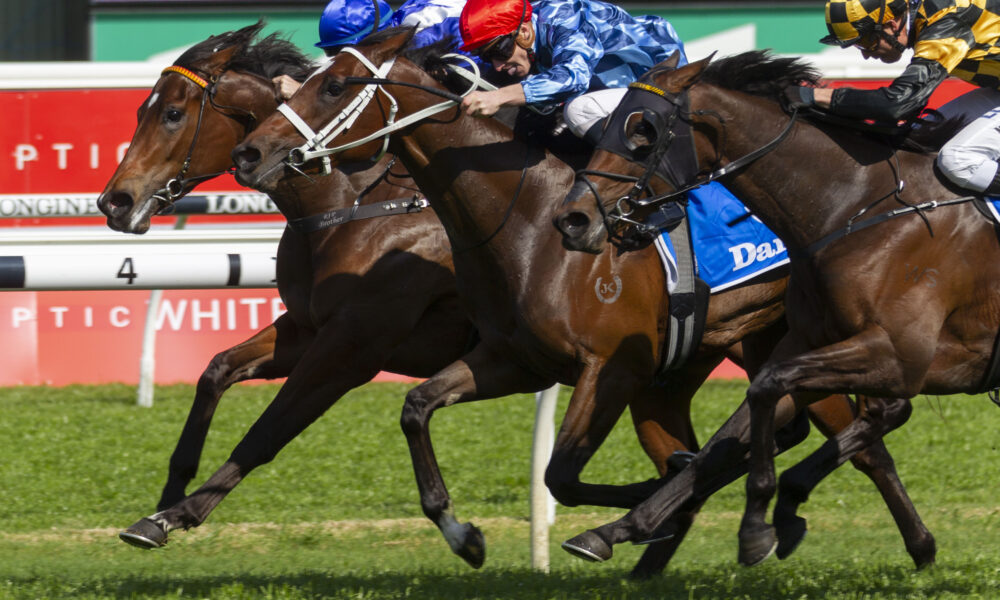 While short priced favourite Libertini (I Am Invincible) was gallant in defeat, holding on for the closest of thirds, honours went to narrow winner Funstar (Adelaide), who prevailed by a nose, and second placed Probabeel (Savabeel) who flashed home late and was in front a stride past the post, beating Libertini by a short head. Race time on the soft track was 1:23.04 with the final 600m covered in 35.36. With Libertini now to be kept to shorter distances and set for the Coolmore Stud Stakes (Gr 1, 1200m) on 2 November, Funstar and Probabeel are expected to meet again in the Flight Stakes (Gr 1, 1600m) at Randwick on October 5 in what promises to be another exciting encounter. Leading trainer Chris Waller for some weeks has been rich in his praise of the ability shown Funstar looks a classic contender by Funstar who was having only her fourth start on Saturday when she was probably not ridden to best advantage to avoid giving Libertini too great a start into the home straight. Funstar’s pedigree tells you she should relish 1600 metres and longer distances and her victory in the Tea Rose was an important milestone for her Coolmore-based sire Adelaide (Galileo) as it gave him his first stakes winner from only a small number of runners to date. Adelaide, who stands at the bargain fee of $11,000 for a horse with his racing and pedigree credentials, was a Grade 1 winner of the Secretariat Stakes (1m 2f) in the United States and a Group 2 winner over the same distance in Ireland before coming to Australia for his signature success in the 2014 Cox Plate (Gr 1, 2040m) in which he memorably swept around the high class field to down Group 1 winners Fawkner (Reset) and Silent Achiever (O’Reilly). A product of the magical Galileo (Sadler’s Wells) / Danehill (Danzig) cross, Funstar was bred in NSW by John Sheather and was an $80,000 purchase from the Bowness Stud consignment at the 2018 Inglis Australian Easter Yearling Sale. She was knocked down to Anton Koolman Bloodstock acting for the same group of owners who race her half-sister Youngstar (High Chaparral), winner of the 2018 Queensland Oaks (Gr 1, 2200m) and The Roses (Gr 2, 2000m) and placed second to Winx (Street Cry) in last year’s VRC Turnbull Stakes (Gr 1, 2000m).