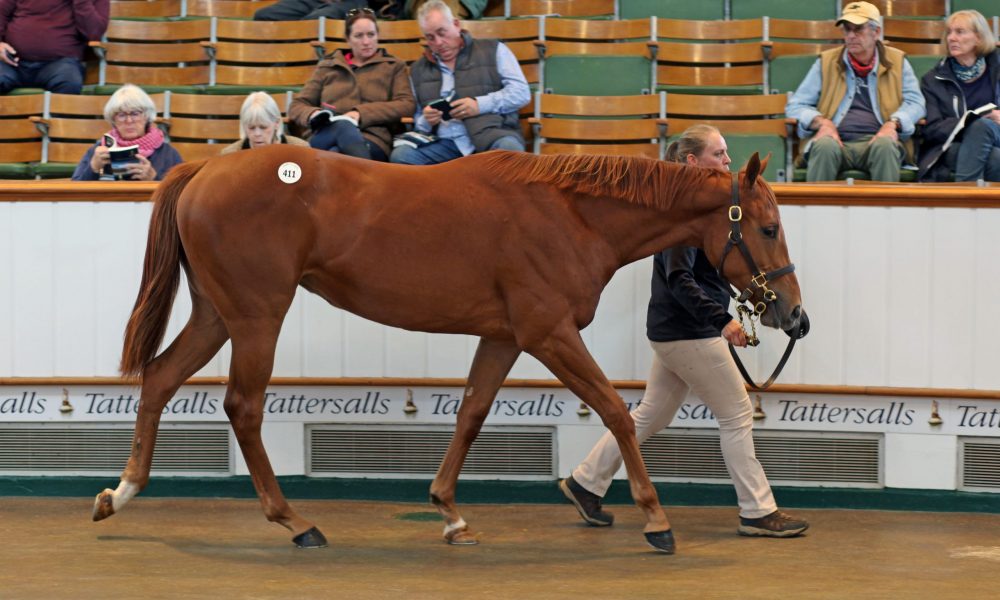 Agent Johnny McKeever signed for the colt, who was catalogued as Lot 418, with Joseph O’Brien, trainer of Rekindling, the underbidder.

“I used to buy some yearlings for Robbie,” McKeever told ANZ Bloodstock News. “Three or four years ago I did some spotting for him and he asked me to keep an eye out for something this week.

“Danny O’Brien cracked it with Russian Camelot and we’re looking for something of that mould. I know what they like; a big, rangey staying colt and he’s very much a European type.

“I sent him a list of around ten horses and a few went under the radar which shows it’s possible, but I gave my opinion on them and I think this was the one that really fitted them well.”

The ninth foal out of Bitooh (Diktat), the colt is a half-brother to five winners including Sea Life (Sea The Stars), who in turn is the dam of exciting Chad Brown-trained three-year-old filly Technical Analysis (Kingman), a winner of four of her six starts, and in August struck for victory in the Lake Placid Stakes (Gr 2, 8.5f), her second at stakes level.

Melbourne Cup hero Rekindling, winner of the 2018 edition, is one of two stakes winners out of the second dam Sitara (Salse), while also from the mare is the stakes placed Sydney Opera House (Australia), who in turn is dam to US Listed winner and Grade 2 placed Julie’s Love (Ad Valorem).

After landing a Frankel (Galileo) colt on Tuesday for 110,000 guineas, Mick Price and Michael Kent Jnr were again active on Book 1’s final day yesterday via agent Dermot Farrington, this time for a filly by Lope De Vega (Shamardal) who was knocked down for 150,000 guineas (approx. AU$285,000).

Catalogued as Lot 380, the filly is out of the stakes placed Anna’s Rock (Fastnet Rock), making her a half-sister to the three-time Group 2 winner and Group 1-placed Breton Rock (Bahamian Bounty).

“She’s a lovely, strong, good moving filly,” Farrington said to ANZ Bloodstock News yesterday. “Her half relation was rated 113 at his highest and he’s the Lennox Stakes winner. It’s top class stuff. I think they’ll end up with a nice filly.

“Ultimately she was bought on type. She’s such a good type. And the sire is a proper sire, while the dam has already thrown one with a bit of ability. To have a half-relation to a top class horse over here and by that sire, the boys should be very happy with themselves.”

Lope De Vega is the sire of 15 individual stakes winners in Australia, headed by four Group 1 winners and Farrington said the filly was ultimately purchased for her potential on the racetrack, but acknowledged the prospect of acquiring outside bloodlines made her an enticing breeding prospect.

“Trainers are looking for racehorses. They might have the breeding barn in the back of their mind, but you’d like to think they’re after getting a racehorse,” Farrington said.

“They’re sought after trainers, and when people see them buying horses by Frankel and Lope De Vega, you can’t get hold of that too easily. So this sale represents a great opportunity to get into those world class sires.”

Godolphin dig-deep for daughter of Sea The Stars

At the time of going to press, a daughter of Sea The Stars (Cape Cross) was the headline act on the third and final day of Book 1 of the Tattersalls October Yearling Sale as Godolphin once again flexed their muscles at the auction, fighting off competition from Coolmore to secure the filly for an eye-watering 1.5 million guineas (approx. AU$2.93 million).

Offered by Newsells Park and catalogued as Lot 411, the filly is out of the dual Group 2 winner Best Terms (Exceed And Excel), who was crowned champion two-year-old filly in England in 2011, making her a sister to Listed winner Star Terms, while she is also a half-sister to fellow stakes winner Fresh Terms (New Approach).

“We have always loved this filly,” said breeder Robert Barnett. “The family has been good to us, and it goes a long way back now. Best Terms boards at Newsells and she was great fun on racecourse. She has a Kingman colt foal and she is in-foal to Wootton Bassett.

“We always admired Sea The Stars, the look of him and the bulk of him, we try and get the right size and the right conformation for the mares.”

Barnett also admitted there was a time when she might have been kept to race, but he concluded: “We were tempted to keep her, but temptation ran out a bit earlier.

“She is the most athletic yearling we have had for quite some time, you see her walking around the ring – she really has a very athletic walk. She has a lovely attitude, she is very laid back, she didn’t fidget at all in the chute but, when she gets going, she gets going!

“There seems to be a good trade for well-bred fillies and breeders are buying them to race and breed from, which is nice to see.”

Anthony Stroud, who signed the docket on behalf of Godolphin, said: “Needless to say she’s from a very good farm, and she’s just very athletic. Godolphin has had a lot of success buying fillies from this sale and she looks like one who could run well over a mile and a half and is the type we are looking for. I think this catalogue has been a bit short on fillies, and this was probably our pick.

“Coolmore was the underbidder, and I believe Juddmonte was in, and they are both fantastic judges, which shows how valuable these fillies are. We’ve pulled up on a few horses this week by Frankel, Sea The Stars and Kingman, but sometimes you have to put your head down and go for it.”

Yearlings by Galileo and Dubawi break seven-figure barrier
As expected, yearlings by Dubawi (Dubai Millennium) and Galileo (Sadler’s Wells) proved popular at Park Paddocks yesterday, with Al Shira’aa Farms going to 1.25 million guineas (approx. AU$2.4 million) for a daughter of the Darley-based sire, while MV Magnier shelled out 1.1 million guineas (approx. 2.15 million) for a colt by the late champion stallion.

The filly by Dubawi was catalogued as Lot 336 and she is out of Group 3-winning Monsun (Konigsstuhl) mare Waldlerche and her five winners are headed by Waldgiest (Galileo), whose four Group 1 victories are headed by a win in last year’s Prix de l’Arc de Triomphe (Gr 1, 2400m). Waldlerche is also the dam of Group 2 scorer Waldlied (New Approach) and Waldkonig (Kingman), whose best win came at Group 3 level.

The filly, who was bred in partnership between Newsells Park Stud and Gestut Ammerland, and Jullian Dollar said that, while he was happy with the transaction, tinged with sadness as it brought to an end a long-running association between the Hertfordshire farm and leading German breeder Gestut Ammerland.

“I’m very pleased with the price, although I’m sad that she came to the sales and we didn’t get a chance to make a bid,” said Dollar. “We would have supported her as it was dispersing the partnership we’ve enjoyed for many years with Dietrich and Annabel von Boetticher.

“That was really a personal relationship between themselves and Andreas Jacobs, so when Graham [Smith-Bernal, Newsells Park owner] took over, as much as they all get along, it was time to end the partnership.”

“He is a proper horse, let’s hope he is very lucky for his new people and he is going to a proper trainer and has every chance,” said O’Callaghan.

Catalogued as Lot 383, the colt is out of 2014 Queen Mary Stakes (Gr 2, 5f) winner Anthem Alexander (Starspangledbanner), who has produced two winners to date.

Well-related Almanzor attracts attention
A colt by Cambridge Stud shuttler Almanzor (Wootton Bassett) proved popular on Wednesday when he was purchased by Godolphin for 425,000 guineas (approx. AU$791,793) at the Book 1 of the Tattersalls October Yearling Sale.

Catalogued as Lot 405 and offered by Highclere Stud, the yearling is out of the unraced Nayef (Gulch) mare Beach Frolic, who has produced two winners, headed by multiple Group 1 winner Palace Pier (Kingman).

Beach Frolic herself is out of winning mare Night Frolic (Night Shift), making her a half-sister to Group 2-winning pair Bonfire (Manduro) and Joviality (Cape Cross).

The son of Wootton Bassett’s (Iffraaj) has made a good start with his first runners, siring five winners so far this season and he is currently covering his third book of mares at Cambridge Stud in New Zealand for a fee of NZ$30,000 (plus GST).

A full report from Thursday’s final session of Book 1 of the Tattersalls October Yearling Sale will be published in tomorrow’s edition of ANZ Bloodstock News.