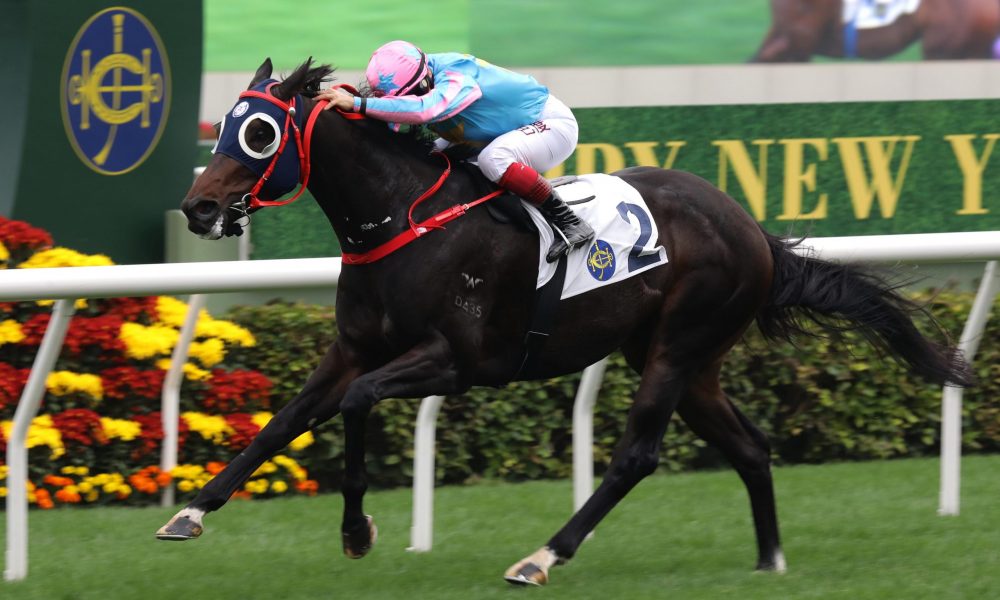 First-up after 194 days between runs, Frankie Lor’s charge made his seasonal reappearance a triumphant one under familiar ally Alexis Badel holding on by a neck to deny Lucky Express (Toronado) and Excellent Proposal (Exceed And Excel) in a time of 1m 22.10s.

“It was a fantastic win from the horse, I am so happy to see him back at his best. He’s been a lovely horse to me and I’m so happy that he was able to deliver today,” Badel said.

Under a first-rate ride by the Frenchman, Healthy Happy – last season’s HK$12 million Hong Kong Classic Cup (1800m) winner – casually crossed from barrier seven to stalk the leader throughout, before hitting the front with 250 metres left to run.

“I got beat by Sky Darci last year because I was carrying a light weight and I was waiting a little bit that day for the sprint but maybe the horse was outpaced.

The five-year-old was a two-time winner in Australia under the care of Peter & Paul Snowden; he now boasts four wins from ten starts for trainer Frankie Lor in Hong Kong.

“It’s a nice win for Frankie and it was a tough win – he just keeps going,” Badel said.

The Zoustar (Northern Meteor) gelding had three trials in preparation for his return after pulling up with issues following his weakening last place in June’s Premier Cup Handicap (Gr 3, 1400m).

“Last run he had some heart problems and then a lot of blood (in his trachea), that took a lot of time to overcome. Then unfortunately, at the end of August, in his box, he nearly pulled his foot out and he needed a month and a half to heal, so I need to say thank you to the vet and the farrier.”

“From there I trialled him three times and he improved every time so to get the win today is a good result,” Lor said.

Tempted to run in the 2021 Hong Kong Mile (Gr 1, 1600m), Lor opted against running the 109-rater, instead taking the patient approach for today’s challenge.

“In the Mile we would’ve needed to face Golden Sixty, so I decided to give him one more trial and set him for this race,” Lor said. “The pace wasn’t very fast and he just went for home in the straight and he was still really strong in the finish.”

“The Stewards’ Cup and the Chinese New Year Cup (Handicap) races at 1600 metres and 1400 metres I need to talk to the owner but we have options,” Lor said.

Lor later sealed a Group 3 double when the unbeaten Master Eight (Oamaru Force) extended his record to a five in the Bauhinia Sprint Trophy Handicap (1000m).

Joao Moreira believes Master Eight has the ability to rise to the top of Hong Kong’s sprinting ranks after the gifted speedster preserved his unbeaten record with victory in the Bauhinia Sprint Trophy Handicap (Gr 3, 1000m) to seal a memorable day for trainer Frankie Lor.

“He might not be the best horse, the best sprinting horse in Hong Kong at the moment but he has everything to be that in the future,” Moreira said of Master Eight, now winner of five starts from as many attempts since joining Lor’s yard as a Privately Purchased Griffin.

“He’s obviously improving and today was obviously his toughest test and he’s done what we’ve expected him to do – he’s a good horse. We didn’t think he was going to get beaten and he’s proved that we are not wrong about that.”

Moreira, who first claimed the Bauhinia Sprint Trophy in 2017 with Amazing Kids (Falkirk), was clinical aboard the son of Oamaru Force, allowing the chestnut to settle just off the speed set by Computer Patch (Exceed And Excel) before overhauling Sight Success (Magnus) in 56.04s. Super Wealthy (Epaulette) was third.

Lor expects the import’s stunning rating rise from 52 to 95 to now carry into triple figures – and a future in Group 1 or Group 2 company.

“I think the horse can still improve. He will go up to a rating over 100, so we’ll be looking for a Group race for him next start. I will talk to Joao to see what we do, because Joao has commitments to some other good sprinters,” Lor said, hinting the Centenary Sprint Cup (Gr 1, 1200m), the first leg of the Hong Kong Speed Series, at Sha Tin on Sunday, 23 January might be an option.

“But Joao also has some good sprinters (he might also consider riding), so I need to talk to him and talk to the owner before we make a decision. More time will be better but his rating will be a hundred and something and we need to race him in Group races – that cannot change, we don’t have a choice.”

Packing Victory’s emergence as a leading contender for the Hong Kong Classic Mile (1600m) on Sunday, 30 January continued with triumph in the Class 2 Cherry Handicap (1400m) for Badel and Danny Shum.

“It was a very nice win, he’s got a big stride – nice action – he’s got early speed, he’s got many qualities,” Badel said. “He did a good job today – he’s a very, very nice horse.”

“He had a light weight (118lb) and he got cover, so he had everything in his favour. Hopefully he is still improving, we will go straight to the Classic Mile from here,” Shum confirmed.

David Hayes will consider Lucky With You (Artie Schiller) for the Hong Kong Classic Mile after the gelding’s emphatic success in the Class 3 Chinese Banyan Handicap (1200m) under Karis Teetan.

“There are options for him, let’s see how he pulls up,” Gibson said.

Unbeaten in two starts, Flying Ace (Swiss Ace) continued an upward trajectory for David Hall and Matthew Poon with an easy victory in the first section of the Class 4 Palm Handicap (1200m), prompting Hall to predict a bright future.

“He was obviously impressive first-up and he was a little bit better today, he got himself out of the gates a bit better and took up a good position.

“It’s good to see him progressing and getting another win on the board,” Hall said.

Lor has similar hopes for Eason (Written Tycoon), winner of the second section of the Class 4 Palm Handicap (1200m) under Joao Moreira.

“He’s still very green, so I’m hoping he can continue to improve. He’s a nice horse,” said Lor, who took training honours with a treble.

It was Englishman Bentley’s ninth success of the campaign and Yiu’s 13th.

Michael Chang saddled only one runner for the card and Mister Monte (Hussonet) duly prevailed with his second win in three starts for Dylan Mo in the Class 5 Yew Handicap (1800m). The victory was Mister Monte’s fifth in 55 Hong Kong starts.