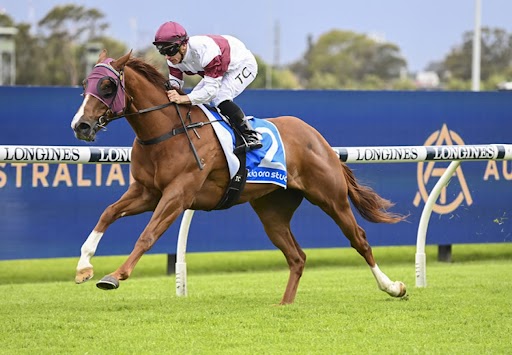 Merchant Navy (Fastnet Rock) gelding High Blue Sea broke his maiden in good style at Rosehill on Wednesday when pulling two and a quarter lengths clear of his nearest pursuer in a 1400-metre maiden handicap.

Trained by Gerald Ryan and Sterling Alexiou, High Blue Sea was fourth at Rosehill over 1300 metres on debut back in June and then resumed for a good second at Kembla over 1200 metres on November 1.

After beginning well, he went straight to the front and travelled nicely under Tim Clark at a reasonable tempo, before lifting the pace from the 600-metre mark. He increased his lead on passing the 200 metres and then went on to score easily in a promising performance.

“He’s always shown us nice ability, it was just a matter of him putting it all together as it’s taken him a while to furnish and get his mind right,” said Alexiou.

“Tim Clark is the best in the business at getting them out of the barriers and he put the race away after the first 150 metres and I was supremely confident after the first 200 metres.

“Hopefully he goes right on with it now.”

A $220,000 Inglis Classic purchase from the Newgate Farm draft for George Moore Bloodstock/Team Moore Racing, he was a successful pinhook having been bought for $100,000 by Binalong Bloodstock from the Erinvale Thoroughbreds draft at the Inglis Australian Weanling Sale.

High Blue Sea is the first winner out of Bodhi Blue (Northern Meteor), herself a winning half-sister to the Group 3 winner Punch On (Tiger Hill).