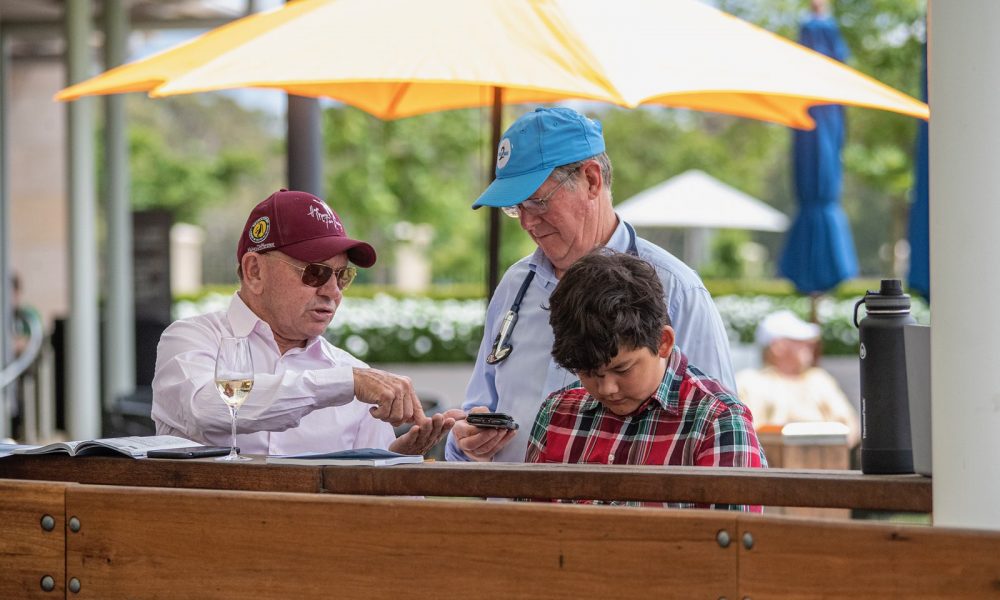 Hong Kong buyers, deemed pivotal to the success of two-year-old auctions in Australasia, are expected to remain active in the market, starting at tomorrow’s Inglis Ready2Race Sale, despite prominent agents from Asia unable to be in Sydney to inspect the horses.

Hong Kong-based George Moore is normally on the ground for the two-year-old sales and last year he purchased the highest-priced lot at the Inglis sale when going to $340,000 for a Deep Field (Northern Meteor) gelding but this year will be relying on the assistance of family to help compile a short list.

Due to the restriction on international travel in Australia, Moore remains in Hong Kong and so he has called on the help of his uncle, Rosehill trainer Gary, to cast his eye over the 226-lot catalogue of horses at Riverside Stables.

“I’m the bloodstock agent for Team Moore this year. It’s great to be here. I’ve had a look at a lot of the videos, pedigrees and I’m very impressed by what is going to be presented at this sale and I’m sure there’s going to be some really nice horses come out of it,” Gary Moore said from the complex yesterday.

“I’ve had a lot of luck out of those sales from both (Inglis and Magic Millions) companies, so I am sure there is a horse that will be attractive to the clients who I am looking for.”

Magus Equine’s Willie Leung is also a regular visitor to Australia and New Zealand’s yearling and two-year-old sales and he is optimistic that he will again be able to make his mark despite being grounded in Hong Kong.

“There’s still plenty of demand for two-year-olds, so it all depends on whether they are happy to try and buy them online … and we will see what happens in the next couple of days,” Leung told ANZ Bloodstock News.

“I have people over there (in Sydney) completing inspections and providing me with some extra videos.”

The emergence of Sky Field and Winning Dreamer in Hong Kong is certain to see agents servicing the jurisdiction keeping a close eye on the progeny of Deep Field.

There are six two-year-olds on offer at the Inglis sale by the Newgate Farm stallion while Leung also singled out Headwater (Exceed And Excel), who has three lots to go under the hammer, as a stallion the Hong Kong market could warm to.

“It is so far, so good because we need 500 horses (in Hong Kong) every year, so the demand is still there and it just depends on whether we can secure the right one (at the sale),” Leung said when asked about his and his fellow Hong Kong agents’ clients willingness to buy horses during the Covid-19 pandemic..

Meanwhile, a champagne brunch and a selection of Ready2Race horses were paraded at Riverside Stables yesterday, attracting a significant number of trainers, bloodstock agents and syndicators.

The Group 1-winning trainer paid $40,000 for Gytrash at the Inglis Melbourne Premier Yearling Sale while he also paid just $18,000 for Listed-winning sprinter Bold Star (Needs Further) from the Magic MIllions Tasmanian Yearling Sale and he won’t be changing his approach to seeking value at the Ready2Race Sale.

“They are cheap horses and I wouldn’t want to break the mould. You are going to get a dud every now and then, but you don’t lose a lot of money that way, so I will be here putting my hand up and probably spend a little bit more than I normally do and hopefully get the right one,” Richards said.

He does, however, hope to have more luck than he did the last time he bought a horse at a two-year-old sale.

“I bought one by Lope De Vega just after I bought Gytrash (as a yearling) and I paid $50,000 I think for him at a Melbourne ready to run and when they were working together as two-year-olds there wasn’t much between them,” he said.

“But the other one is still trying to win a maiden I think, so I’d shied away from the ready to runs a little bit after that, but I will buy one here on Tuesday.

“It’s a good sale and the best part about it, anyone who buys should be racing in a couple of months.”

Inglis general manager of bloodstock sales and marketing Sebastian Hutch is in no doubt about the quality of horses available at this week’s sale.

“We’ve been very pleased with the response to the catalogue and we can say with real sincerity that it is the best breeze-up sale catalogue that there’s been in Australia, so when we talk about there being genuine quality in the catalogue we mean it,” Hutch said yesterday.

“People who come out to the complex will see that and the people who watch the breezes on the website will see it.

“It feels like there’s going to be solid demand for horses who tick all the right boxes: horses who breezed well, look the part physically and have the right profile.

“Just beneath the top level I also think there could be some really fantastic buying. The record of the sale for producing good racehorses and winners – every owner wants to win a race and the sale has an excellent record of producing winners.”

Inspections for the Inglis Ready2Race Sale continue today while the auction will start at 10am local time tomorrow.