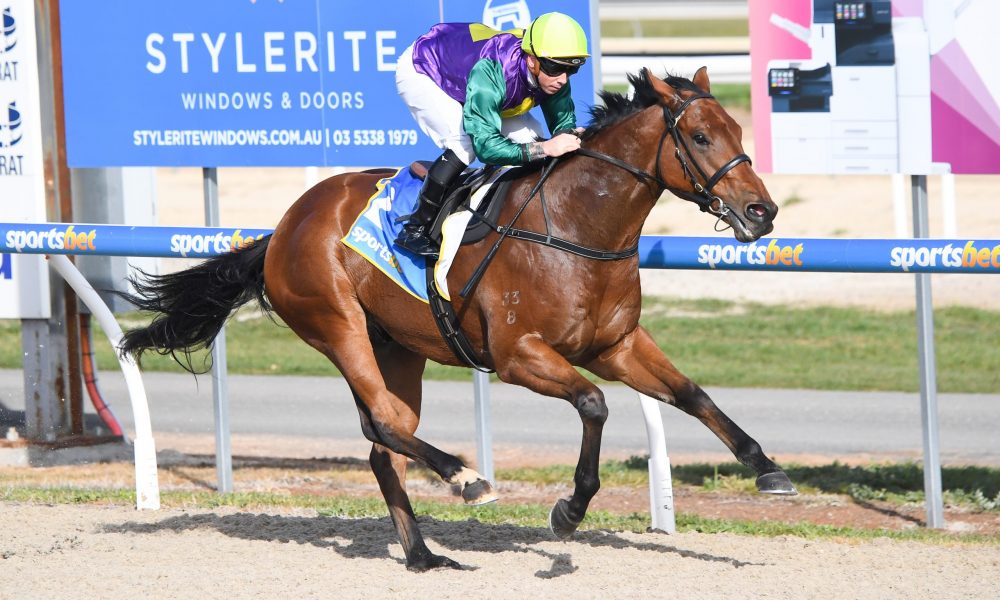 In what was yet another winner for high-flying first season sire Capitalist (Written Tycoon), his 16th in fact, the Tony and Calvin McEvoy-trained Hurtle backed up a Morphettville trial win with this procession over the 1100 metres of the Ballarat synthetic, defeating fellow debutant Rock Melody (All Too Hard) and Ostracised, who at $375,000 is the most expensive yearling for his first season sire Divine Prophet (Choisir).

Hurtle, himself a $120,000 graduate of the Magic Millions Gold Coast Yearling Sale for McEvoy Mitchell Racing and Belmont Bloodstock, was bred by Matthew Sandblom’s Kingstar Farm.

His dam, Murtle Turtle (Murtajill), twice a runner up at Group 3 level as a juvenile, has passed through broodmare sales’ rings twice in the past two years. In 2020 she sold for $40,000 in foal to Extreme Choice (Not A Single Doubt) to Gainsborough Lodge and, having sold her Deep Field (Northern Meteor) yearling and resulting Extreme Choice weanling for $380,000 and $220,000 respectively this year, she went through the sales ring again on Wednesday at the Magic Millions, this time knocked down to Merricks Station and Group 1 Bloodstock for $180,000 in foal to Shalaa (Invincible Spirit).

The syndicate, which features Mark Milano and Cornerstone Stud, who sold him as a yearling, was formed by Jack Cripps, who oversees sales and syndicates at McEvoy Mitchell Racing and was winner of the Newcomer Award at Wednesday evening’s Godolphin Stud And Stable Staff Awards.

“We had 15 people or so there (at Ballarat in the ownership of Hurtle) who own a really small portion,” said Cripps after collecting his award at the Gold Coast.

“Talking to them, for a lot of them it was their first runner ever as an owner, and their first winner and it realigns the values that you have in doing your job.”

Co-trainer Calvin McEvoy believes the gelding has a bright future.

“It was fantastic to see Hurtle do that,” McEvoy said after his impressive victory. “He’s been pretty sharp in all of his gallops, but obviously, you want to see him come to the races and do it.

“It is just fantastic for the ownership group, Mark Milano who has been a great supporter of our stable, Cornerstone Stud, and the lads who came to the track to see him run.

“Hurtle was very strong at the end of the 1100 metres so he has scope to get further. He’s a hardy little horse that will handle that well.

“It was a good result, and he looks to have a very bright future.

“We’ll see how he comes through it, he’s pretty hardy, I think he will handle it really well, I expect him to go home and eat up and we can maybe find something in town in a few weeks.”