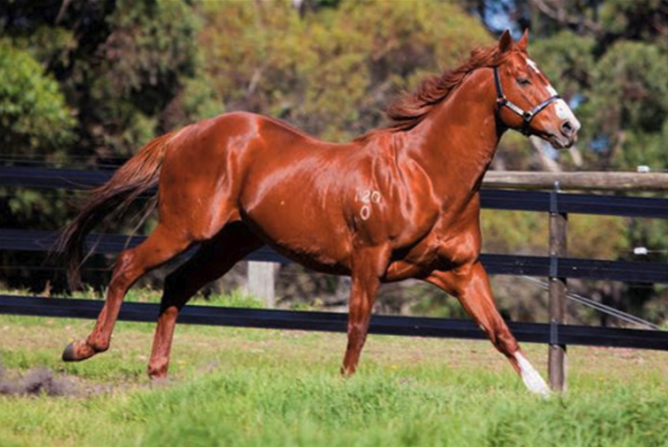 I’m All The Talk – Western Australia-based first season stallion I’m All The Talk (Stratum) sired his second juvenile winner last week when Em Tee Aye (2 g ex Azita by Oratorio) took out the Amelia Park Plate (1400m) at Ascot. Trained by Trevor Andrews, Em Tee Aye had been runner-up at his previous start at Bunbury before breaking through by three quarters of a length over No Surrender (Universal Ruler) and Queen Brown (Patronize). Em Tee Aye’s half-sister by Playing God (Blackfriars) was bought by Robert Gulberti from Mungrup Stud at the Magic Millions Perth Yearling Sale in February for $60,000. I’m All The Talk, who stands at Mungrup Stud for a fee of $5,500 (inc GST), is also the sire of the twice-winning, stakes-placed filly Watch Me Dance.

Super One – Lucky Shadow (2 f ex Tiger Eyes by Choisir) gave her sire Super One (I Am Invincible) a second individual winner when she won a 1000-metre maiden on debut at Tamworth. The Bob Milligan-trained filly jumped well under Keagan Latham from the outside gate but found herself midfield and wide. Upon straightening, she chased resolutely, getting up in the final strides to defeat Mischief Managed (Spill The Beans) by a neck, with Bay Of Bengal (Sepoy) two and a half lengths away in third. Bred by Fairhill Farm’s Mike O’Donnell and sold for $15,000 at the 2018 Inglis Australian Weanling Sale, the filly was then reoffered in the Highway session of the Inglis Classic Yearling Sale where she brought the same price to the bid of Milligan. Former Singapore champion Super One stands at Newgate Farm. Last season he covered 169 mares at a fee of $11,000 (inc GST).

So You Think – So You Think (High Chaparral) broke new ground, siring his first Group 1 winner at 2400 metres and his sixth overall when Quick Thinker (3 c ex Acouplamas by Al Maher) won the ATC Australian Derby (Gr 1, 2400m) at Randwick on Saturday. Coolmore Stud’s So You Think only raced at that trip once, finishing fourth to Danedream (Lomitas) in the 2011 Prix de l’Arc de Triomphe (Gr 1, 2400m). So You Think stood for $38,500 (inc GST) at Coolmore Stud last season, covering 234 mares.

Declaration Of War – A stellar season for Declaration Of War (War Front) continued when he recorded his 26th individual stakes winner after Voyage Warrior (4 g ex Chaleur by Stravinsky) scored an upset win in the Sprint Cup (Gr 2, 1200m) at Sha Tin. Declaration Of War has already had a Melbourne Cup (Gr 1, 3200m) winner in Vow And Declare, Victoria Derby (Gr 1, 2500m) winner in Warning and a Summer Stakes (Gr 1, 8f) victor in Decorated Invader since the start of the southern hemisphere season and Voyage Warrior joined the ranks of his stakes winners with Sunday’s Sprint Cup score. The Ricky Yiu-trained Voyage Warrior found himself in front under Vincent Ho, as hot favourite Aethero (Sebring) missed the start, and he recorded a gutsy all-the-way victory. Hot King Prawn (Denman) finished second, three-quarters of a length from the winner, while Thanks Forever (Duporth) was a further half-length away in third.

Dundeel – Arrowfield Stud’s Dundeel (High Chaparral) registered his tenth individual stakes winner when Entente (3 g ex Nextess by Stratum) scored a gritty win in the Carbine Club Stakes (Gr 3, 1600m). It was expected to be a day in which Dundeel’s Group 1-winning three-year-olds Castelvecchio or Super Seth rose to the fore, but instead it was Entente who carried the flag, stepping up in class from an 1800-metre maiden win to score a first stakes success. Purchased for $105,000 by Shaun Dwyer at the 2018 Inglis Melbourne Premier Sale from the Bombora Downs draft, Entente had one trial for Dwyer before shifting north to Gai Waterhouse and Adrian Bott. Entente held off the late surge of Bottega (Snitzel) to score by a neck, with Power Scheme (Fiorente) a length and a half away in third. Dundeel stood for $66,000 (inc GST) this season, covering 209 mares.

Gingerbread Man – Former Singapore champion Gingerbread Man (Shamardal) celebrated the biggest win of his stallion career when Ima Single Man (2 g ex Single Spice by Not A Single Doubt) scored an upset victory in the Karrakatta Plate (Gr 2, 1200m). Ima Single Man, bred and raced by Yarradale Stud, gave Gingerbread Man his fourth individual stakes winner in taking out the Karrakatta Plate. He prevailed in a tight photo over Watch Me Dance (I’m All The Talk) to remain unbeaten after two starts, with Dark Assault (Statue Of Liberty) not far away in third. Gingerbread Man stood at Yarradale for $4,400 (inc GST) last year, serving 20 mares.

Hallowed Crown – Golden Rose (Gr 1, 1400m) winner Hallowed Crown (Street Sense) landed his first stakes winner from his first crop with Colette (3 f ex Libretto by Singspiel) taking the Adrian Knox Stakes (Gr 3, 2000m) at Randwick. The Godolphin-owned filly defeated Toffee Tongue (Tavistock) by two and three-quarter lengths with Quintessa (Pierro) a further three-quarters of a length back in third.  The former Darley stallion, who has recently been relocated to Twin Hills Stud, has had 70 runners for 32 winners, but the promising Colette was his first at stakes grade. She is likely to have her first attempt at the highest level next weekend in the ATC Australian Oaks (Gr 1, 2400m). Hallowed Crown will stand for a fee of $11,000 (inc GST) this year.

Not A Single Doubt – The recently-retired Not A Single Doubt (Redoute’s Choice) produced his 71st individual stakes winner when Doubtland (2 c ex Miss Sharapova by Ustinov) scored an emphatic victory in the Kindergarten Stakes (Gr 3, 1100m) at Randwick. Purchased for $1.1 million by Orbis Bloodstock from the Arrowfield Stud draft at the Inglis Australian Easter Yearling Sale, the Michael, Wayne and John Hawkes-trained colt debuted with a strong win on the Kensington track last month. He remained unbeaten with his four-length Kindergarten win under Brenton Avdulla, defeating Jerle (Exceed And Excel) and Not An Option (Not A Single Doubt). In his final season at Arrowfield Stud, Not A Single Doubt covered 94 mares at a fee of $110,000 (inc GST).

Shamus Award – Cox Plate winner Shamus Award (Snitzel) sired his sixth individual stakes winner with Shamino’s (4 g ex Elumino by El Moxie) success in the Manihi Classic (Listed, 1100m) at Morphettville. Bred by David Brook, who races the horse in the name of his family’s Saddlers Knife syndicate, the Phillip Stokes-trained Shamino came with a strong run to defeat favourite Garner (Barbados) by a long neck, with Hard Empire (Hard Spun) a head away in third. Shamus Award stands at Rosemont Stud, where his 2019 fee was $11,000 (inc GST). Last season, he served 149 mares.

Snitzel – Three-time Australian Champion Sire Snitzel (Redoute’s Choice) is on the cusp of another milestone as he stands one away from a century of individual stakes winners. Meuse (3 f ex Precious Lorraine by Encosta De Lago) took her sire a step closer with her victory in the Laelia Stakes (Listed, 1600m) at Morphettville. An important lead-up to next month’s Australasian Oaks (Gr 1, 2000m), the Anthony Freedman-trained Meuse prevailed under a top Jason Holder ride to defeat Wings Of Pastrami (Supreme Class) by a nose, with the winner’s stablemate Realm Of Flowers (So You Think) a length away in third. Snitzel, who is in contention for his fourth straight title, stood at Arrowfield Stud last season for $220,000 (inc GST), serving 141 mares.

Zebedee – The late Zebedee (Invincible Spirit) scored his tenth individual stakes winner and his first in Australia when Ecumenical (2 f ex Amalgamate by Zenno Rob Roy) won the Dequetteville Stakes (Listed, 1050m) at Morphettville yesterday. Ecumenical was bought by trainer Mick Huxtable for $14,000 out of the Mill Park Stud draft at last year’s Magic Millions Adelaide Yearling Sale. Zebedee first made the journey to Australia for the 2015 breeding season, remaining at Cornerstone Stud from the 2017 breeding season until his death in October last year. In a shortened season, he only covered four mares this season at a fee of $9,900 (inc GST).