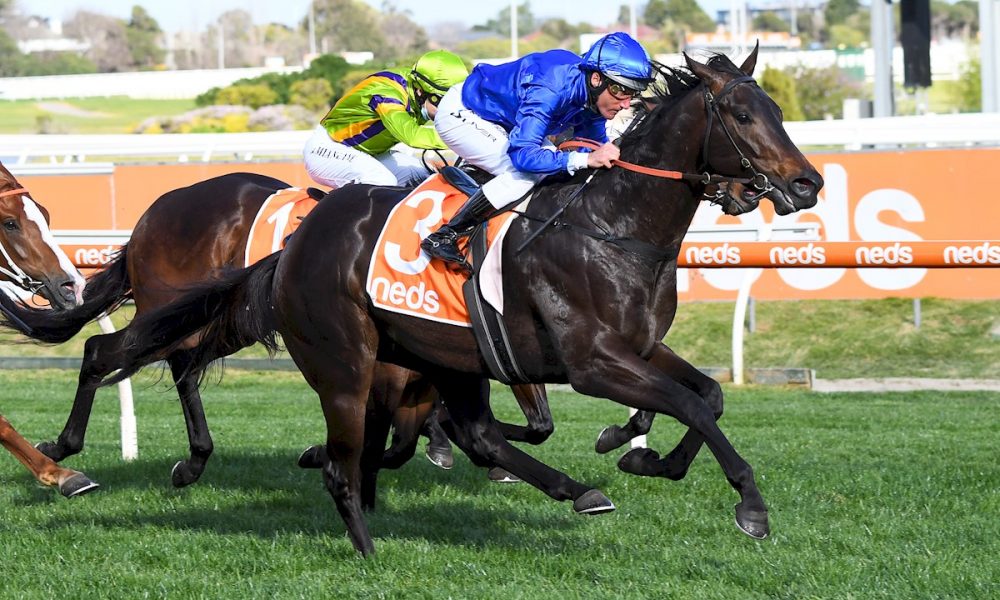 We love the bargain basement stories, like the Takeover Targets, or the one about the passed-in mare snapped up the next day for $1,000 while in foal with this year’s Golden Slipper (Gr 1, 1200m) winner Stay Inside.

But sometimes we’re dazzled as well by the big hitters, the whales who swim in a league of their own.

This week’s topic Ingratiating is the result of a couple of major coups in the world of thoroughbred empires, when two literal takeover targets changed hands a bit more than a decade ago.

In March, 2008, Godolphin’s Sheikh Mohammed splashed half a billion dollars to turn the Inghams’ Woodlands/Crown Lodge holdings into Darley/Godolphin Australia.

Six months later he bought the Stonerside Stable in the US – for the proverbial figure that can’t be discussed – from Robert and Janice McNair, owners of many other things including NFL club the Houston Texans.

From Woodlands, the sheikh acquired a foal by Lonhro, who went on to become the outstanding sprinting mare Obsequious, best of her female line.

When Fast Cookie was covered by Gainesway Farm’s Wood Memorial (Gr 1, 9f) winner Tapit in 2011, it yielded a jewel that would lodge in Godolphin’s crown worldwide – Frosted – the outstanding miler who’d help Tapit to a hat-trick of North American sires’ titles from 2014-16.

The powerful grey took the Wood Memorial like his dad, amongst three Grade 1 triumphs, one of which still takes the breath away – his Metropolitan Handicap (1600m) win at Belmont Park in 2016 – by 14.25 lengths.

And when Frosted began shuttling to Darley’s Northwood operation in Victoria in 2017, his meeting with Obsequious produced her fifth – and so far clearly best – offspring.

Ingratiating scored his second stakes success with a sterling win up the Flemington Straight in the Talindert Stakes (Listed, 1100m) in February (beating the just-as regally bred Gimmie Par, Ole Kirk’s half-sister out of a full-sibling to Black Caviar in Naturale). That was followed by a fighting second in the Blue Diamond (Gr 1, 1200m), when swooped on late by the flying Artorius.

The colt showed his class with a third in Stay Inside’s Slipper, then last Saturday – resuming from a spell as an awesomely-built three-year-old – he powered home from last of the seven to take the Vain Stakes (Gr 3, 1100m).

Exciting breeding buffs further, Gimmie Par honoured her bloodlines and franked the Talindert form by taking the following race, the Quezette Stakes. But it was Ingratiating’s imperious length victory that had more tongues wagging.

Having helped Frosted to sixth on last term’s First Season Sires list, the brown colt’s Saturday win has shunted Frosted to the top of the Second Season Sires table for this campaign. It’s early days, of course, but with others showing much promise from fewer than 70 named offspring in Australia so far – including dual Adelaide stakes winner Cloudy and her fellow Godolphin filles Frost Flowers and Translation – Darley Australia are bullish about the prospects of their only grey stallion, who’ll serve 150 mares this spring at a freshly bumped-up $44,000.

“Frosted was probably one of the best horses we’ve raced in the US,” Darley Australia’s head of stallions Alastair Pulford tells It’s In The Blood of the galloper who ran fourth in American Pharoah’s Kentucky Derby (Gr 1, 10f) before a second in the Triple Crown winner’s Belmont Stakes (Gr 1, 12f).

“He retired as one of the best horses in the world as a four-year-old. He was always going to come down here as a stallion. He had a pedigree pretty much foreign to Australians, being a Tapit. There’d been precious few of them standing in Australia, and none with any commercial success anyway, so he was interesting. And he’s such a good-looking horse, as well as having been such a good racehorse, that we got 100 mares to him in his first year, off a $35,000 fee.

“We undertook to support him ourselves that year and that included Obsequious. He’s got a 1600-2000-metre pedigree, which a lot of American racing is based around. So we thought the best chance we could give him was to give him some speed mares to get him off the mark quickly, and Obsequious was a very good, fast filly.”

Obsequious was a compact and muscled flyer, who was thus well-suited to the more scopey Frosted. At two she placed second in the Reisling (Gr 2, 1200m) Slipper trial before running eighth in the main event to Crystal Lily. She blossomed at three, taking the San Domenico Stakes (Gr 3, 1000m) and the Light Fingers Stakes (Gr 2, 1200m), before retiring at four.

She had the Woodlands/Darley imprint all over her, being by Octagonal’s most famous son Lonhro, out of the Commands mare Sycophant, whose female line featured Woodlands sires Quest For Fame (sire of her dam Shand), and Clear Choice (sire of Shand’s dam Camille).

Shand was handy, taking two of her five wins in Sydney, but enjoyed only moderate success at stud. Her Octagonal mare Sydney Owner was a city winner who was third in the Tea Rose Stakes (Gr 2, 1500m) of 2005.

Sycophant, the fourth of Shand’s ten named foals, might have been smart. She was restricted to one start, but won a Kensington two-year-old maiden by three-lengths. Obsequious was the first and the best of her eight named foals – four of whom were by Lonhro.

At stud, Obsequious’ first two matings were with Street Cry, producing provincial-winning brother and sister Courtly and Submissive. A visit to Exceed And Excel worked slightly better with dual Sydney winner Deference, but none have boomed like Ingratiating. He now also has half-siblings at Godolphin in two-year-old Sepoy filly Surrenders, while a return for Obsequious to Frosted – once Ingratiating made such an impression before he’d raced – has resulted in another brown yearling colt.

Having been sold last year to Victorian breeder Eddie Hirsch amid a Darley sell-off for what looks a bargain $27,500, Obsequious is now in foal to Russian Revolution. Hirsch, incidentally, is also now the owner of Sycophant.

What also stands out about Ingratiating’s pedigree is the dual presence of the Blue Hen Eight Carat, in a 4×5 bottom-half cross through Obsequious. Eight Carat was the dam of Octagonal and Cotehele House, the mother of Commands (and his exceptional full brother by Danehill, Danewin).

A double-up of Eight Carat is present in the pedigree of no lesser performer than eight-time Group 1 winner Verry Elleegant in a 4×4 cross, with Cotehele House in the female line of both the sire Zed and the dam Opulence.

Still, Pulford feels there have been only mixed results from a double-up of Eight Carat, having seen it often enough through Darley sires Octagonal and Commands. Sheikh Mohammed’s empire may prefer to believe in the power of Frosted, and that might yet prove hard to doubt.

“Obsequious went to Street Cry, and Exceed And Excel, but Frosted has brought out the best result in her by a long way,” Pulford says. “He’s clearly a stallion on his way up in both hemispheres.

“Obsequious was from a very good looking family, and sending her to Frosted was a case of putting a good looking mare to a good looking stallion. And the result – Ingratiating – was always the best looking foal down at Northwood.”

Back home in the US, Frosted’s flagbearer has been the dual Grade 2-winning filly Travel Column, but Ingratiating has won more than $200,000 more than her, from one extra start.

“Ingratiating has matured and hopefully he can keep maturing,” Pulford says. “Frosted was a handy two-year-old but better and three and better again at four, and if his progeny can progress as he did it would bode well for the future.”