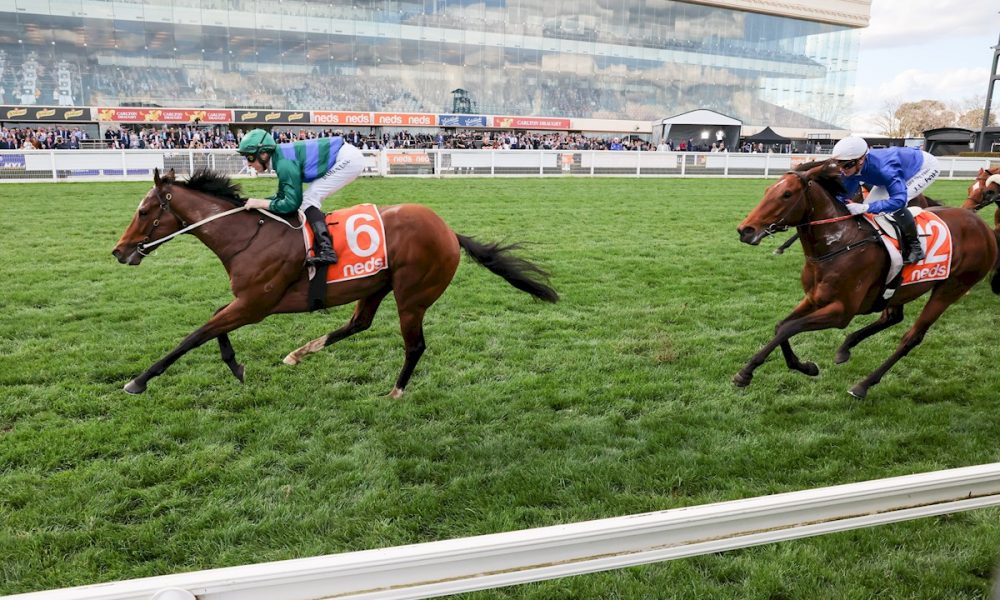 Lindsay Maxsted is feeling a lot of tension as the winter turns to spring.

Happily, it’s not Monday-to-Friday pressure drawn from his various roles as one of Australia’s corporate high-flyers, in which he’s been at the pointy end of firms including KPMG, Westpac and BHP.

Instead, the anxiety comes about on weekends.

For one thing, he was born and raised in Geelong, and his beloved AFL Cats, having just claimed the minor premiership, are aiming up for another finals campaign in pursuit of a title that’s proved damned elusive since their last one in 2011.

For another, the seasoned breeder and owner has a colt who’s also threatening major achievements this spring in Jacquinot (Rubick), who reappeared as a three-year-old in blinding style by taking Saturday’s McNeil Stakes (Group 3, 1200m) at Caulfield.

Jacquinot is now second-favourite for the $1 million Golden Rose Stakes (Gr 1, 1400m) at Rosehill on the afternoon of Saturday, September 24.

Geelong is favourite to win the AFL grand final, which also takes place on the afternoon of Saturday, September 24.

If both his entities line up on that day – the race will jump at around half-time in the football – we wish Maxsted luck, and a large flask of chamomile tea.

“There’s a lot of tension every weekend at the moment,” Maxsted, who’ll no doubt be at the MCG if Geelong makes the big one, says with a laugh. “But hopefully, it’s the happier kind.”

The 68-year-old has had a long and rich history in breeding and owning, mostly conducted along with four partners and friends, including Greg Ingham, of GPI Racing. Maxsted doesn’t hesitate when asked the best horse he’s bred – the strapping chestnut Align (Night Shift). He won four of his first six, the last a two and a half length romp in the Group 1 Sires’ Produce Stakes at Randwick in 1999. Unfortunately, excruciatingly, the start before he’d run the bravest of races in just being collared late by Catbird in the Golden Slipper.

“You watch it and cry,” Maxsted tells It’s In The Blood. “He jumped from barrier 13, was three-wide without cover the whole way, pushed up to hit the lead inside the last 100 metres, and just got beaten in the last ten metres by a long head.

“He was a serious horse, the top-weighted two-year-old of his year, in a serious crop, with the likes of Redoute’s Choice, Testa Rossa and Shogun Lodge.”

Alas, Align didn’t manage another win after his Sires’ triumph, and was ninth in the famous Caulfield Guineas of 1999, won by Redoute’s from Testa. But he went to stud in New Zealand as a million-dollar winner, siring 12 stakes-winners, including Group 1 victors Fully Fledged and Nightlign.

That was a while ago now – turf stars, like football premierships, can be hard to come by – but Maxsted might just have another one in a similar league in Jacquinot, who also happens to be outright favourite for the Caulfield Guineas. The breeder will be hoping his career is a mirror image of Align’s – as in, the other way round: no majors at two, but more to come later.

The Mick Price and Michael Kent Jnr-trained bay started in dynamic style, winning at Caulfield last Boxing Day, before luck deserted him. He missed the jump and had no room in the straight when fifth in the Blue Diamond Prelude, drew wide and settled back before pushing home for a long neck third in the Blue Diamond, then worked home well when unsuited by the Heavy 9 for sixth in the Slipper.

What might have been was contemplated as he went for a spell, but amid the annual excitement of seeing the new-season three-year-olds return, Jacquinot is one who appears to have developed spectacularly during his break.

“When you looked at him walking around at Rosehill before the Slipper, or Caulfield before the Blue Diamond, you thought he didn’t look a two-year-old,” Maxsted says. “You thought, ‘Gee, he’s here on raw ability’. That doesn’t always mean they’ll kick on at three, but it did look like he’d be better at three.”

That was suggested in spades when Jacquinot powered home to score by a length and a half on Saturday, further raising hopes of another top-liner from a family with plenty. In fact, only three races later, his two ‘uncles’ – sons of his granddam Pontiana (Redoute’s Choice) – contested the Memsie Stakes (Gr 1, 1400m) in Dragon Leap (Pierro) and Illation (So You Think).

Jacquinot, the first foal of unraced mare Ponterro (Pierro), continued a strong early season for Rubick (Encosta De Lago), giving him two stakes-winners in the first month of season, after which he sits fifth on the general sires list with 17 winners from 72 starters, at 24 percent.

As with many of his matings, sending Ponterro to Rubick was connected with Maxsted’s role as chairman of Coolmore Australia, where the stallion stood before moving to Swettenham Stud last year.

Shantha’s Choice – who had two starts for a Seymour win and a nose second at Sandown – runs strong in Jacquinot as the dam of Rubick’s mum Sliding Cube, and with Redoute’s Choice being Pontiana’s sire.

And with Sliding Cube being by Rock Of Gibraltar, also by Danehill, this gives Jacquinot a 4Sx4D cross of the great son of Danzig, through another male in Redoute’s Choice down below.

“The Shantha’s Choice double-up was probably the first thing I saw in the blending of pedigrees,” Maxsted said. “I was hoping it’d be quite special. Plus, I love Encosta De Lago, so that would’ve been part of my thinking. I tend not to over-complicate it, or go too far back in the pedigrees.”

The back story began in 2009, when Maxsted’s busy-ness made him late for the Inglis Easter Yearling Sale, where his main trainer John Hawkes did his bidding. It was the first such sale since the global financial crisis, prices were low, and Maxsted feared he’d missed a bargain in the Fairway Thoroughbreds filly who became Pontiana. She was out of an Adelaide Listed winner in Liberty Rose (Royal Academy), and with a dual stakes-winning third dam in Freedom Fields (Bluebird).

“She was one of the early lots, and she’d been through the ring by the time I got there, passed in,” he says. “I asked John if he liked her on conformation, and he said ‘Yep’, so I said, ‘Let’s give it a go’. I liked the pedigree, with Royal Academy there and other aspects, and fortunately, we were able to buy her.”

Netted for $215,000, Pontiana won her first two starts, at Kembla Grange and Rosehill, but didn’t win in her subsequent 12, despite one Group 2 placing and three in Listed class. But she would show immense quality at stud, however, with three stakes winners from her six named foals so far.

Her first foal became a Group 1 winner, with Inference – a VRC Derby third-placegetter – carrying Maxted’s green and blue hoops to success in the 2017 Randwick Guineas, before a second in the Rosehill version.

After the unraced Ponterro and Sequitur – city-placed among her only two starts – came Dragon Leap. Selling at Easter for $1.05m after the deeds of Inference, the now four-year-old won the Avondale and Auckland Guineas – both Group 2 – before his strong Memsie fourth on Saturday.

And after Montia (Vancouver) – a city-winner retired after 12 starts – Pontiana’s sixth and last named foal so far is Illation. Passed in at Easter at $450,000, Illation – who carries Greg Ingham’s colours for the band of owners – won two Adelaide Listeds before blotting his copybook with an ill-behaved last in the Memsie.

Ponterro has now emulated her dam in throwing a stakes winner at her first try, in Jacquinot. After damned luck in missing to Merchant Navy and on her second visit to Rubick, and then with a Yes Yes Yes (Rubick) colt dying a few months after birth, Ponterro is now in foal to another Coolmore sire, shuttler Wootton Bassett (Iffraaj).

Ponterro wasn’t offered at a sale. Jacquinot was, at last year’s Magic Millions, but fortunately for Maxsted and co, he was passed in at $90,000 of a $120,000 reserve.

“He’s always been sound, but he was a late bloomer, and looked a bit gawky at the sales,” Maxsted says. “At that time, Rubick wasn’t all that popular, but we didn’t want to give him away, because of the family.