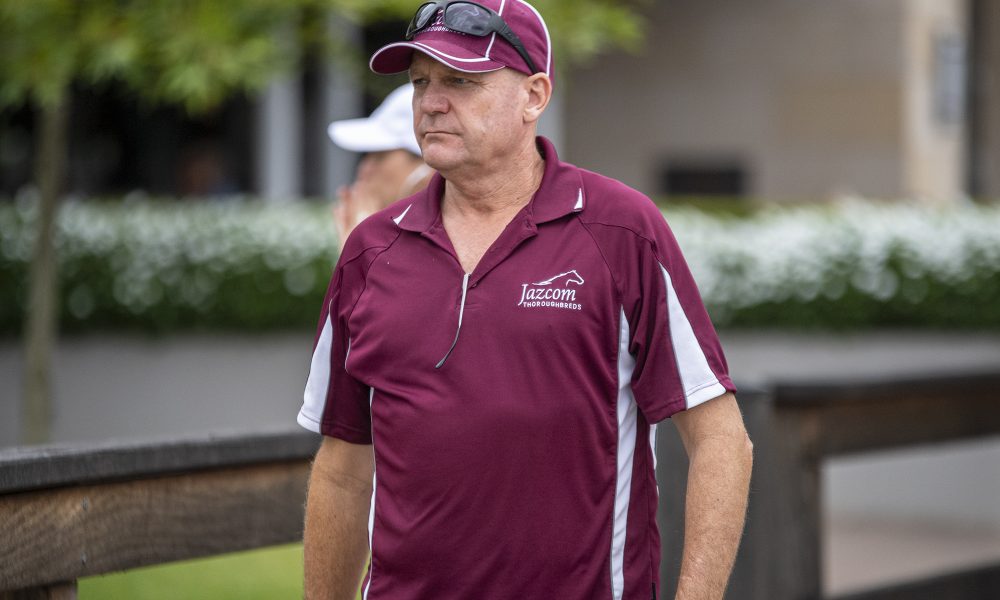 Colin Branthwaite and his wife Megan will soon drive off into the sunset, leaving their Jazcom Thoroughbreds operation behind, but not before offering a draft of seven yearlings at next month’s Inglis Classic Yearling Sale.

The Sydney auction, and three quarantine consignments being prepared to be shipped to Asia, will be the final official duties the pair will have with the Jazcom Thoroughbreds property at The Oaks.

The couple’s 71-acre property, which has housed horses such as Group 1 winner Think It Over (So You Think), Eduardo (Host), Ballistic Lover (Smart Missile) and Fasika (So You Think) during their spells, is currently for sale with offers above $4.85 million being considered through agent United Realty.

Colin Branthwaite yesterday revealed they would not be lost to the thoroughbred industry entirely, but that they would make Queensland home after first enjoying a well-deserved extended holiday upon the sale of the property, which is situated near Sydney.

“It’s what we were always going to do with Megan’s family up there and we’ll probably head up to the Sunshine Coast, but we’re just going to travel for the next 12 months and take a break, take a deep breath,” Branthwaite told ANZ Bloodstock News.

“I’ve got plenty of options up there. It’s more that there’s a strong (property) market and trying to maximise what we can get for the place now. Like I say, whether we go now or in five years’ time, we were always going to go to Queensland.”

The Branthwaites have owned the property – which features 15 stables, 70 yards and five big paddocks, a four-bedroom family home, two guest accommodation options, an in-ground swimming pool and tennis court – for the past 13 years.

“Look, we won’t be lost to the industry, but we like the idea of travelling; we watch all those travel shows on Youtube and everything, and we just want to cruise around, pull up at a beach and say, ‘we might stay here for a week’, which is something we’ve never been able to do,” he said.

“I’m 55 and Megan’s 50, which is not that old, but I believe, not just in our industry but across the board, people work too long, that’s my belief anyway. So, we said, ‘hang on a minute, let’s look after ourselves a bit more’.

Jazcom Thoroughbreds has not yet officially been sold, but offers have been tabled, mainly from non-thoroughbred interests.

“We’d love to keep the girls a job but it’ll work itself out.”

The Branthwaites’ more immediate focus, however, is the Classic sale and the seven yearlings they will offer at Riverside Stables.

They are offering a Pariah (Redoute’s Choice) colt on behalf of a client, while a Rubick (Encosta De Lago) colt and fillies by Pierro (Lonhro), Flying Artie (Artie Schiller), Nicconi (Bianconi), Vancouver (Medaglia D’Oro) and Headwater (Exceed And Excel) are all being pinhooked by Jazcom.

“I worked very hard last year to buy, I bid on a lot of horses, but other people had better ideas than me with what they wanted to pay for them,” he said.

“We only bought one colt and the rest are fillies and there’s some nice ones there.”

One of the major spelling farms serving Sydney and provincial trainers, Jazcom has also developed a reputation for being astute pinhookers.

At the 2020 Inglis Scone Yearling Sale – held at Riverside Stables – Jazcom sold a Toronado (High Chaparral) colt for $180,000 after buying him the year before for just $10,000, while in 2019 the Branthwaites topped the Inglis Melbourne Gold sale, selling a Dundeel (High Chaparral) filly for $90,000, after outlaying just $5,000 for her ten months earlier.

They also sold the top-priced lot in Book 2 at the 2019 Magic Millions Gold Coast Yearling Sale, a Brazen Beau (I Am Invincible) filly who made $230,000 through the Goodwood Farm draft. Branthwaite bought her for $40,000 at the previous year’s Magic Millions Weanling Sale.