Jelfs a refreshing addition to the bloodstock world 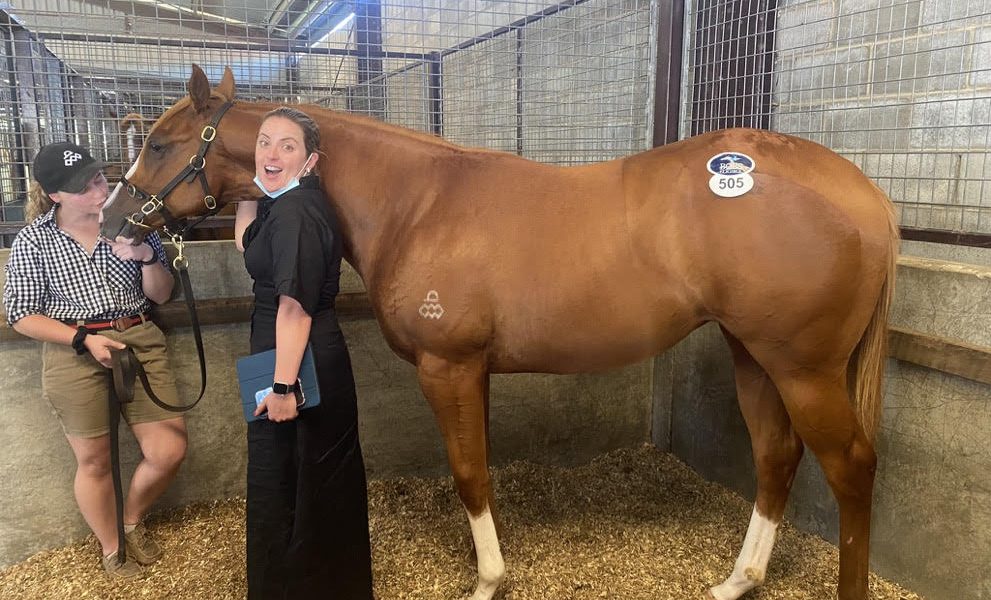 Scrolling through my Twitter feed something so refreshing and authentic bobbed up.

It was a video post by Annabel Neasham Racing featuring an interview with former Sky Racing presenter Lizzie Jelfs standing alongside a Hellbent (I Am Invincible) filly she had purchased at the Magic Millions Gold Coast Yearling Sale.

For a number of reasons, it stood out to me.

Firstly, it showed the natural rapport with horses that Jelfs has built over a long time working with them, and, secondly,  as she stroked the filly down the neck, she spoke with genuine, heartfelt enthusiasm about her.

“She’s got a bit of a sassy attitude but I don’t mind that in fillies at all and you can see she’s no-fuss she just wants to get on with everything and once you see her she’s a really lovely mover.

“I loved the way that she conducted herself. She’s one I think will be an early type of runner. She will be a ladies’ horse and fingers crossed we will be back here (Magic Millions) next year,”  Jelfs said in the short video that was filmed on a phone.

It wasn’t a tricked-up, hard-sell promotion that we see so often these days in the saturated social media world. It was just a woman and a horse happy in their natural state.

What also struck me was that Jelfs had a certain glow about her which showed she’s clearly comfortable with her decision to walk away from a relentless, full-time role as an analyst and presenter at the TAB-owned Sky Racing and free herself up to get some balance back in her life.

Just a week prior to the record-breaking sale on the Gold Coast Jelfs and her good friend Annabel Neasham announced that they were joining forces to select bloodstock for the rapidly emerging Warwick Farm stable.

It heralded the beginning of what is unquestionably one of the most exciting new partnerships in Australian racing.

“It’s really good and refreshing to do something that I’m enjoying and I think it can only grow,” said Jelfs

“We thought we would announce we are working together and see what interest there was and it really took off and we realized we could buy some nice horses. It’s nice to have achieved that in a short time.”

The two astute horsewomen made their presence felt during the sale and under Annabel Neasham Racing/Lizzie Jelfs Bloodstock they teamed up to purchase three fillies and one colt.

Together they outlaid $450,000 for a filly by Snitzel (Redoute’s Choice) out of Sabanci (Encsota De Lago), $350,000 for a filly by Maurice (Screen Hero) out of Shacked Up (Not A Single Doubt), both purchased from the Arrowfield Stud draft, while they paid $200,000 for a colt by Nicconi (Bianconi) out of Somnium (Sebring) out of Widden Stud’s offering, and $90,000 for a Hellbent filly out of Champagne Charlee (Myboycharlie).

“Annabel is so gutsy, she just says I want that in my stable and we will work out how we get owners in these horses. I’m really conservative so working with someone like her really pushes you along,” said Jelfs.

It was a smart move by Neasham to get Jelfs involved in her bloodstock team and capitalize on the knowledge and good judgment of horses that earned her a strong following from Sky Racing viewers during her time on-air with the broadcaster.

“I am looking at horses on type. I’m not going quite the way as all the agents are by talking nicks and crosses. I’m learning a lot about that but I’m also doing what I know best and that’s how horses present in the yard, walk and look at all shapes and sizes because they might not have perfect confirmation but I’m taking my knowledge of the past 20 years and now looking at younger horses.”

Jelfs is not operating as a syndicator, she is simply offering people the opportunity to join her in the ownership of horses she has her own hard-earned money invested in.

“I’m not a syndicator charging a management fee. That might be three to five years down the track. I just want to race horses at the moment. I’m still learning about the bloodstock game,” Jelfs explained.

“Getting involved in a horse is a lot of money and some people are saving up to buy a horse and I want to make sure I do my best for clients and make sure that they have a great time and good experience and turn out to be a client for life and a friend. We want to attract those types of people.”

While a good judge of race form herself, Jelfs has no intentions of interfering with the training aspects of the stock.

“I trust Annabel. We discuss lots of horses but ultimately she’s the trainer so the decisions are up to her. She supports me in what I have selected and I will support her in how she wants to train them. I’m sure we will have some discussions but she’s a smart lady and knows what she’s doing.

“It’s about bringing our love of the horses together and we both know what we like.”

The job’s done at their first sale buying horses together and now Jelfs can return home to Sydney and spend some precious time with her two young daughters, aged nine and six, which is something her full-time television career didn’t allow her to enjoy too often in recent years.

While the launch of the ‘Race With Lizzie’ concept has been a big win for Australian racing, the announcement of a $1 million stand-alone show jumping competition instigated by Magic Millions and Coolmore Australia principal Tom Magnier is a huge boon for equestrian sport in this country.

In my column last week, Magnier spoke passionately about the development of showjumping in Australia and suggested we “watch this space.”

Together with Gerry Harvey and Katie Paige, whose daughter Georgia is an elite show jumper rider based in Europe, they have come up with a grand plan to take the sport to another level in the southern hemisphere.

“It’s very important to keep the talent at home now and grow the sport here. It’s also a great reason for people to retrain racehorses to jump. We are really keen to get this sport to the top level and start getting Australians here instead of them thinking they have to go overseas,” Magnier told ANZ Bloodstock News.

“A huge thank you to Katie Paige, Gerry Harvey, and Tom Magnier. This is the most exciting thing to happen in Australian Showjumping. It was an honor competing at Magic Millions this year and we can not wait to be back next year for bigger and better things,” said Chugg.

Hats off to that!