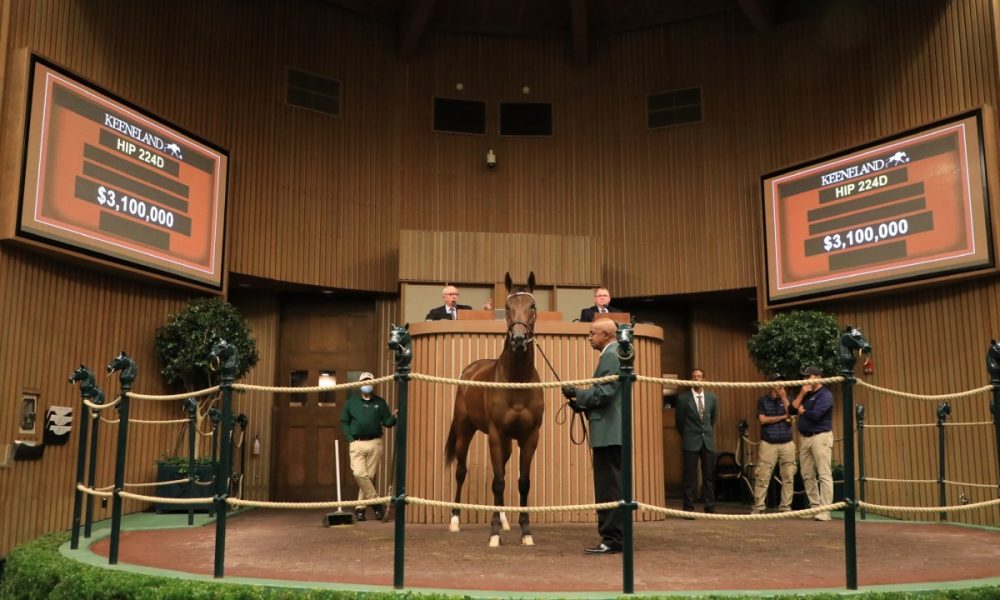 Australian buyers were active from start to finish during Wednesday’s opening day of the Keeneland November Sale in Kentucky, with an array of players securing mares to bring Down Under.

The action started with the second lot to pass through the ring, as Milburn Creek landed Raymundo’s Secret, a Grade 2-winning daughter of Treasure Beach (Galileo), and ended four lots from the conclusion of the vibrant opening session, when Newgate Farm and SF Bloodstock landed the last of their three purchases with Quinta Nota (Tale Of Ekati), the penultimate mare sold on the day.

However, it was the Will Johnson-purchased stakes-winning two-year-old Quality Response (Quality Road) that topped the Australian buying, with the agent going to US$510,000 (approx. AU$698,350) to secure the mare on behalf of Yarraman Park.

The two-time winner was bought in foal to Spendthrift’s first season sire Authentic, a son of their champion US sire Into Mischief (Harlan’s Holiday).

“She was an impressive winner on debut and a two-year-old stakes winner over that sprint distance, so it lends itself to being attractive to Australia,” Johnson told ANZ Bloodstock News yesterday.

“As a complete outcross to Danehill, the pedigree and the performance ticks those two boxes.

“The third box, the physical, having looked at a lot of mares and marrying it up to the pedigree, she was a lovely type. Putting that together, Yarraman were very happy to follow her through.”

In addition to being able to sell her first foal in the US, the move to secure the four-year-old is borne from the foresight that looks well beyond her first Australian produce when eventually mated to Yarraman’s I Am Invincible (Invincible Spirit), which, all being well, will be on the ground in the spring of 2023, and considers the breeding value of the resultant foals.

“She’s in foal to a Kentucky Derby winner who is a beautiful physical himself, so you’d hope that the first foal out of her is good, and with a bit of luck you’ll be able to sell that progeny, either as a weanling or a yearling, and hopefully you can monetize the foal in US dollars and you can get the mare back to Australia for breeding season in the spring,” Johnson continued.

“Arthur and Harry (Mitchell) are the best at what they do in terms of buying commercial broodmare prospects and they’re very big on the physical.

“The fact that she’s a stakes-winning two-year-old and, if you look down the page, the fact that there is both Storm Cat and Kingmambo there, marries up well with I Am Invincible on paper.

“Also, you’ll be producing a foal which is a complete outcross in itself, which down the line will command a premium in Australia.”

The now four-year-old mare won five races, culminating with her Grade 2 success. One of two winners from three to race out of Greatness (Mr. Prospector) mare Paulette Caveat, who herself is a half-sister to the stakes placed Absolute Heaven (Not For Love) and Caveat Apt (Chiefs Crown), dam of stakes winner Crowned Dancer (Tactical Advantage) and the stakes-placed So Blessed (Chapel Royal).

The Irish-bred mare was a winner at Dundalk before moving to the US, where she won the Chicago Stakes (Gr 3, 7f) on her penultimate start in June.

She is a half-sister to Purciaretta (Cotai Glory), a winner of a stakes race in Italy on Sunday’s feature racecard in Rome.

Also adding to a purchase at Fasig-Tipton was Paul Moroney and wife Catheryne Bruggeman. The pair went to US$260,000 (approx. AU$356,000) to buy the two-year-old stakes race-winning Ippodamia’s Girl (Stormy Atlantic).

Newgate Farm and SF Bloodstock added to their two buys at Tuesday’s Fasig-Tipton with a triple swoop on Keeneland’s opening day of trade.

The six-year-old mare, who is out of a half-sister to stakes winners Hakeem (Harlan’s Holiday) and Let’s Go Cheyenne (Tiznow) and granddaughter of Grade 3 winner Michigan Bluff (Skywalker), was sourced for US$185,000 (approx. AU$253,320) .

Their final purchase came courtesy of the supplemented Quinta Nota, a two-year-old Group 1 winner in Peru, whose dam is a daughter of Bourbon Belle (Storm Boot), a three-time Grade 3 winner and Grade 1 runner-up and dam of champion Canadian three-year-old Not Bourbon (Not Impossible).

That buy preceded the most expensive of Wednesday’s session, as the next lot saw the hammer fall at US$3.1 million (approx. AU$4,247,855) for American Oaks (Gr 1, 9f) winner Paris Lights (Curlin), a winner of four of her nine career starts. She was bought by Spendthrift Farm from the ELiTE consignment and is now set for a date with Into Mischief.

“Very classic, American racehorse,” Spendthrift general manager Ned Toffey said of Paris Lights. “Big, scopey filly, classic type—and I think she’ll suit Into Mischief really well. Happy to have her. She comes from as good a family as we have in the stud book, so there’s not much more you could ask for.”

“It was a good, steady, strong session,” said Shannon Arvin, Keeneland president and CEO. “We felt great about the way today went. It was as we had expected and anticipated and hoped.”

Australians were not the only international buyers to engage with Wednesday’s Book 1 sale, as Japan-based Masahiro Miki was the session’s leading buyer with three mares bought for a total of US$3,675,000 (approx. AU$5,035,764), including the sale’s second highest-priced lot, Grade 2 winner Pink Sands (Tapit), who sold for US$2.3 million (approx. AU$3,151,634).

“As we welcome more visitors and travellers from around the world, we saw a more diverse group. They are active, and they are going to be active into Books 2 and 3,” said Tony Lacy, Keeneland’s vice president of sales. “They are not going anywhere anytime soon. That is encouraging as we step forward into the next year or two.”