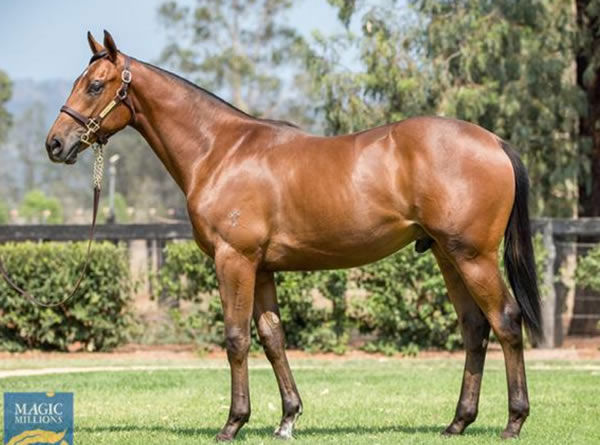 2 g I Am Invincible – Octavia by Holy Roman Emperor

Well-bred juvenile King Of Sparta (I Am Invincible) got off the mark at the fifth attempt when landing the 2YO Maiden Plate (1150m) at Randwick on Wednesday.

Off the track since April following the ultimate gear change, King Of Sparta followed two trial wins with a quarter-length defeat of the highly-regarded Military Expert (Redoute’s Choice) on Wednesday, with Lucky Sun (Maurice) four lengths back in third.

“Obviously the first and second horse are going to be destined for bigger things hopefully, as far as our bloke is concerned, that’s for sure,” Paul Snowden said.

“It was good to see him tough it out and put a win on the board. I think we’ll just sit back and take stock. I know he’ll pull up well because he was pretty well forward for today, so there’s no issue there. It’s just a matter of placing him in the right races now.”

Settled just off the pace in seventh place under Regan Bayliss, King Of Sparta improved rounding the turn and showed a smart turn of foot to challenge strongly at the 200 metres, before battling well to hold off Military Expert, with the pail well clear of the other nine runners.

Bayliss said gelding the son of I Am Invincible (Invincible Spirit) proved the difference for the $2.80 joint-favourite.

“That was a key operation,” he said. “Obviously he showed glimpses of ability when he was a colt, he’s just come back a lot more focussed and relaxed.

“He can be known for going a little bit fierce, but he actually relaxed lovely for me today. I think he beat a pretty smart one in Annabel’s (Neasham) horse. He should go on with that.”

The fourth foal out of Octavia, King Of Sparta is a brother to city winner Ljungberg and half-brother to Brisbane-winning filly Aviemore (Written Tycoon).

Octavia has a Zoustar (Northern Meteor) weanling filly and was put back in foal to I Am Invincible last year.