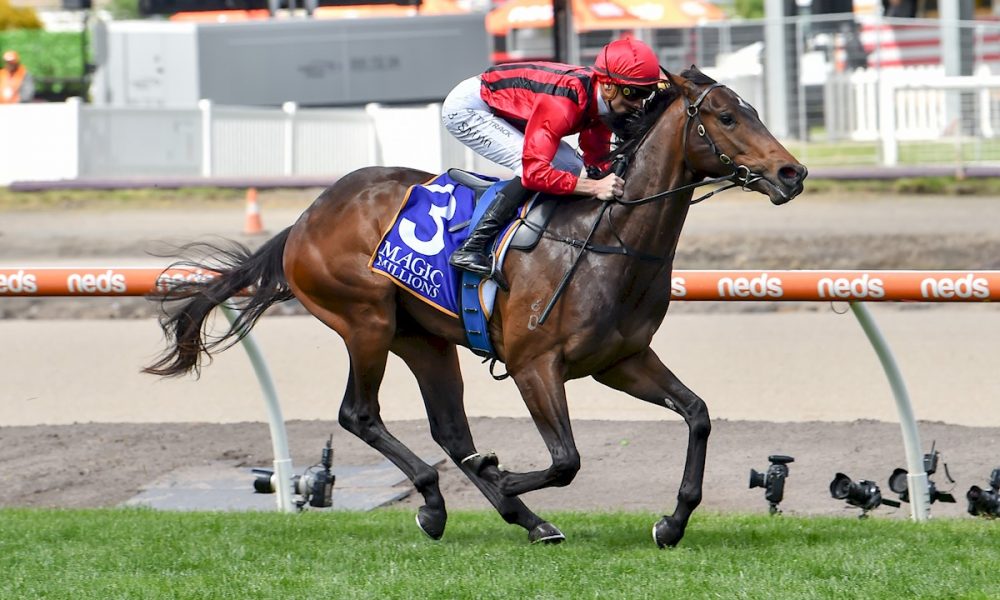 2 c I Am Invincible – Sultry Feeling by Encosta De Lago

King’s Gambit (I Am Invincible) rocketed to the top of early markets for the Golden Slipper Stakes (Gr 1, 1200m) after impressively winning the Debutant Stakes (Listed, 1000m) at Caulfield on Saturday.

King’s Gambit, a $15 chance for the Slipper, was subsequently spelled by his trainers following the emphatic win.

“It certainly went to plan. It was how we thought the race would unfold. He went very well,” said Peter Snowden, who trains in partnership with his son Paul.

“The end of his work has always been the best part of his work, so it was good to see him as strong as he was late.”

The performance laid down an early benchmark for this season’s new crop of two-year-olds, and continued the strong start for juveniles owned by Newgate Farm, who race King’s Gambit, alongside breeders Gooree Stud and partners China Horse Club, Starlight, Go Bloodstock and Grant Racing, among others.

Bred by Gooree Farm, King’s Gambit was born and raised at Newgate Farm, who bought into the precocious colt as a foal.

He is the 40th individual two-year-old stakes winner for Yarraman Park Stud’s champion sire I Am Invincible (Invincible Spirit).

Out of the Encosta De Lago (Fairy King) mare Sultry Feeling, herself a Group 3 winner and Group 1 placegetter in the Tattersall’s Tiara (Gr 1, 1400m), King’s Gambit is a half-brother to two winners. Sultry Feeling has a yearling filly by Snitzel (Redoute’s Choice), and is due to foal to Newgate sire Extreme Choice (Not A Single Doubt).