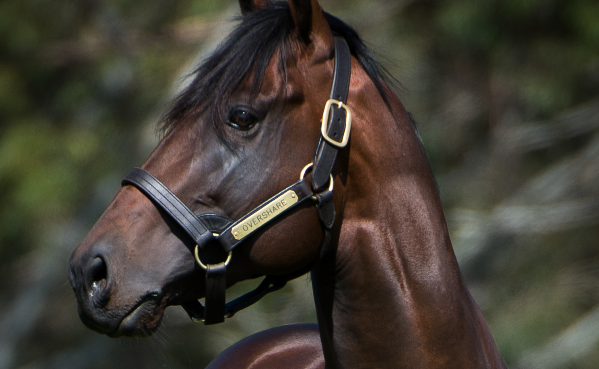 Lady Laguna gave her sire Overshare (I Am Invincible) a perfect start when she not only stepped out last week at Eagle Farm as the Spendthrift stallion’s first ever runner in a race but also gave him his first winner as she took the QTIS Two-Year-Old Handicap over 1000 metres in smart fashion.

The Annabel Neasham-trained juvenile overcame a wide barrier and quickened smartly through the closing stages under Ryan Maloney to close down Goddess Of Peace (Caravaggio) and consign that rival to the runner-up berth, half a length behind, with third-placed Mishani Mistress (Kobayashi) two and a quarter lengths back.

The result was met with delight by her owners OTI Racing and by Spendthrift who bought her sire for $320,00 at the 2016 Inglis Easter Yearling Sale and now stand him at their farm in Kerrie, Victoria at a fee of $11,000 (inc. GST). Overshare carried the Spendthrift silks to success in the 2018 Zeditave Stakes (Gr 3, 1200m) for Team Hawkes before retiring to stud at the end of that season and produced a first crop of 52 foals.

The young stallion had 17 of his first crop progeny offered at auction with 14 selling for an average of $29,357, with the top price being $180,000 for a filly bred by Glastonbury Farms, sold to Hawkes Racing and named Seattle Phoenix.

Lady Laguna was purchased privately from Spendthrift by OTI Racing and is the second named foal and first to race out of the three-time winner Catalina De Lago (Encosta De Lago). The mare is a half-sister to the Group 2 winner She Will Be Loved (Strategic), from the wider family of Group 1 winners DanzDanzDance (Mastercraftsman) and Lucia Valentina (Savabeel).

The filly also had the minor distinction of being OTI Racing’s first ever two-year-old to win a race before Christmas. Lady Laguna is expected to have at least one more start before enjoying a  break to aid her maturation.