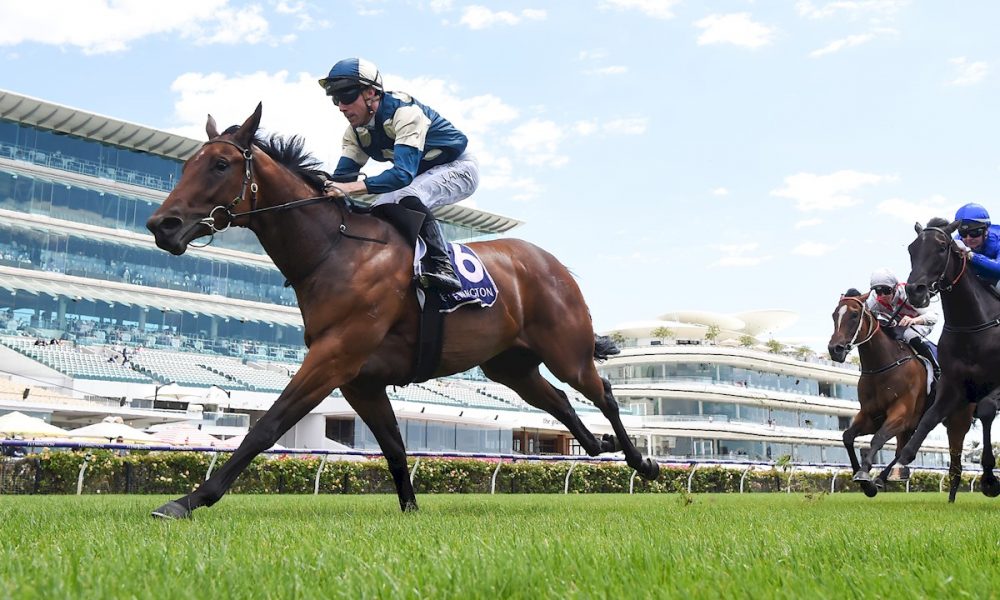 Latizia (Capitalist) is set to tackle some of the biggest juvenile races on the Australian calendar after creating a big impression on debut at Flemington on New Year’s Day.

Racing in the colours of prominent owner Ozzie Kheir, the Ciaron Maher and David Eustace-trained Latizia sprinted clear of Godolphin pair Va Via (Astern) and Kin (Impending) in the New Year Sprint (1000m) to put herself forward for bigger and better targets.

“We were reasonably confident that she had good ability, she had trialled up well,” said Eustace, who attributed much of the credit to assistant trainer Lucy Yeomans. “A big thank you to Lucy and the team at Cranbourne, she’s not the easiest of fillies, she can be cantankerous at times. Julian Welch has done a bit of work with her as well with the gates so all credit to them as they’ve done a really good job with her.”

Added winning rider John Allen: “It’s my first time actually sitting on her but there were high raps on her from the stable and it proved that way. She was very professional and the plan was to take a sit on her, but she began well and she was looking to press forward, so I just let her get into her rhythm.

“I liked the way she dug in the last 100 yards and pulled away from them late. It was a good win.”

Latizia, a $475,000 Magic Millions Gold Coast purchase last year, may not be returning to Queensland to tackle the $2 million Magic Millions 2YO Classic (RL, 1200m), for which her barnmate Coolangatta (Written Tycoon) is an odds-on favourite, but Eustace told Racing.com on Wednesday that the filly would be given her chance to qualify for the Blue Diamond Stakes (Gr 1, 1200m).

“She will aim for the Diamond and that will allow her to have three and a half weeks into the Preview and then we can work out whether she has another run into the Diamond or not.

“She’s come through it well but obviously first start on quickish ground first day out, it always takes a little bit out of them, so we are mindful of that and not wanting to have to travel either.”

Latizia is the first foal out of Spanish Pipedream (Scat Daddy), a two-time stakes winner in the United States who also finished fourth in the Queen Mary Stakes (Gr 2, 5f) at Royal Ascot as part of trainer Wesley Ward’s annual travelling brigade.

Hailing from the family of 2014 champion turf female Dayatthespa (City Zip) and Grade 2 winner Get Smokin (Get Stormy), Spanish Pipedream – a US$125,000 yearling – was acquired for US$370,000 by S F Bloodstock and Newgate Farm at the 2016 Keeneland November Breeding Stock Sale.

Upon her arrival in Australia in 2017, Spanish Pipedream was served by Capitalist (Written Tycoon) and Extreme Choice (Not A Single Doubt) but missed. She was again served by the former in 2018, with the result being Latizia.

She has a yearling filly by Exceed And Excel (Danehill), a filly foal by I Am Invincible (Invincible Spirit) and was served again by Capitalist in early November.