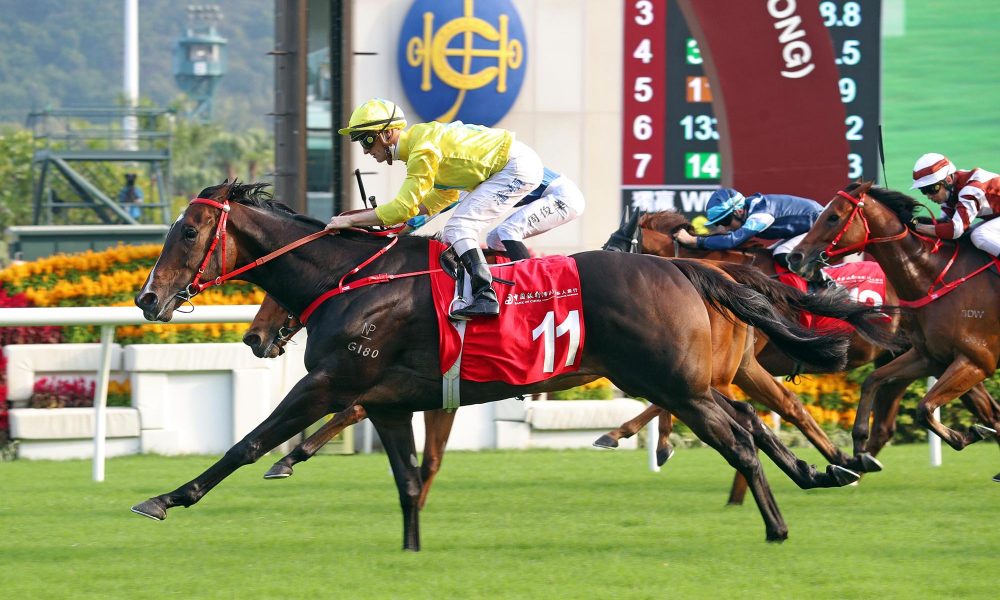 Allowed to settle midfield behind Kurpany’s (Mayson) searing tempo after jumping from barrier 11, Lucky Sweynesse stalked the favourite Wellington (All Too Hard) before spearing clear over the final 200 metres to defeat Pierre Ng-trained pair Lucky Patch (El Roca) and Duke Wai (Per Incanto).

“He’s done it tough from awkward gates this time in but behind the gates I saw six jockeys trotting their horses up and they’ve all got speed and I knew it was going to be a bit messy,” Purton said.

“But he didn’t begin that great. I didn’t have any option but to take the spot I got, which worked out well with the way the race was run. Master Eight got in my way a little bit, just prior to straightening, but I just tried to straighten him and it cost me a little bit of ground as I swung around him.

In seventh place for most of the race, Lucky Sweynesse motored over the final 800 metres in 43.62s.

Declaring the four-year-old as the best horse he has ever trained, Manfred Man also lauded Purton’s ride.

“I think the jockey rode the perfect race for my horse. The horse’s condition was very good, but unfortunately, he got the outside draw. He’s still thinking about how to race, but the jockey said he would get the good position. If we’d got a better draw, I’d have been more confident,” said Man, who previously handled top-liners Eagle Regiment (El Moxie) and Pleasure Gains (Cape Cross).

“I think this one is better than the other two before. I’m confident to say he can still improve.”

Wellington finished sixth, beaten two and a quarter lengths, to lead in a cluster of Group 1 winners with Stronger (Not A Single Doubt) seventh and Sky Field (Deep Field) eighth.

The Group 2  contest was one of the few to previously elude Purton, who had not ridden since last Saturday after testing positive for Covid.