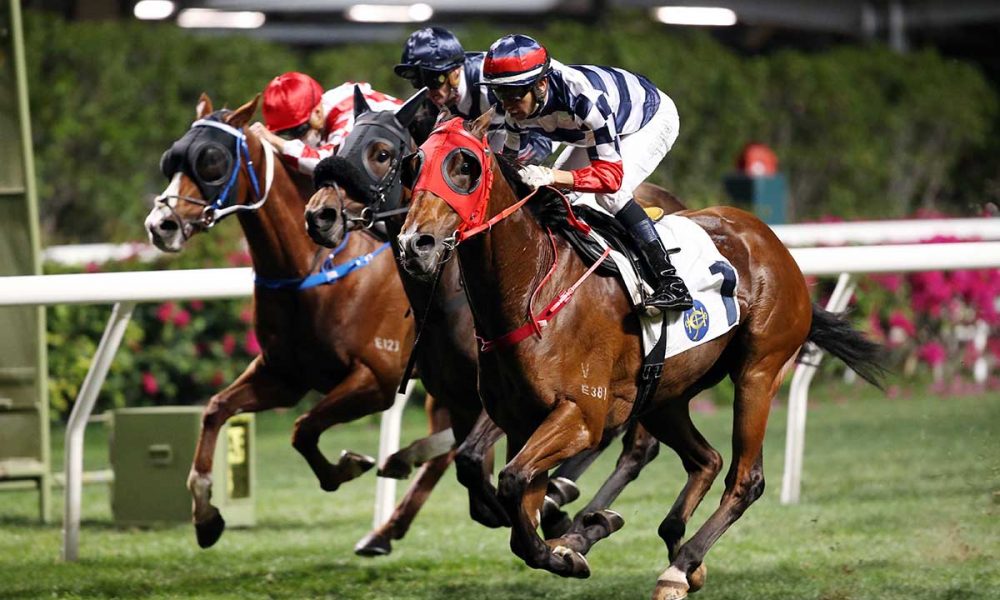 Joao Moreira and Danny Shum laid down auspicious markers ahead of the gChampions Day meeting at Sha Tin on Sunday by posting trebles at Happy Valley last night.

Shum will be represented on Sunday by Hong Kong Derby (Listed, 2000m) victor Romantic Warrior (Acclamation) and Tourbillon Diamond (Olympic Glory) in the QEII Cup and More Than This (Dutch Art) in the Champions Mile after saddling winners Gorytus (Footstepsinthesand), Packing Famous and Namjong Sings (Your Song) last night.

Moreira’s latest trio of wins leaves the Brazilian with a 106-104 margin over Purton, while John Size holds a 65-64 edge over Frankie Lor in the trainers’ championship.

Chris So celebrated a pair of career milestones in perfect fashion, reaching 300 career wins in Hong Kong and 100 victories at the city circuit with a double.

“I’m very happy, honestly. I’ve been training for nine seasons, so I’m getting about 30 wins a year but Hong Kong training is very tough, very competitive,” So said. “I have to compete against champions like John Size.

So sealed a double when South African import Super Commander (Vercingetorix) swept through on the inside under an inspired Alexis Badel in the Class 4 Po Lam Handicap (1000m) to triumph for the first time in Hong Kong at his 23rd start.

“The inside made the difference and that was our plan to have him in the first four and get him to relax,” So said of the gelding previously trained by David Ferraris. “It was a very good ride by Alexis.”

Shum first featured at the meeting when Namjong Sings controlled the speed under Badel before scrambling to victory in the first section of the Cha Kwo Ling Handicap (1200m).

“He did a really good job, he had the inside barrier so it worked out well,” said Shum.

Diamond Star notched his second win at Happy Valley in three starts with sharp acceleration to land the Class 5 Yau Tong Handicap (1800m) for Size and Moreira before Super Mission (Super Easy) showed the benefit of a stint in Conghua with a withering finish to win the Class 4 Tiu Keng Leng Handicap (1200m) for Ricky Yiu and Derek Leung.

“When you ask him, he can lead but you’ll be doing much then but I can guarantee that if you ride him quietly, he’ll give you a good finish,” Yiu said. “We had to ride him from luck, a bit quiet, from the barrier (eight) and he did a good job.”

Moreira teamed with Tony Millard to claim the Class 3 Lei Yue Mun Handicap (2200m) in a last-to-first success with Blastoise, another horse previously trained by Ferraris.

“It was a very good ride by Joao,” Millard said. “This horse is a good tough stayer and Joao summed up the situation well when he realised the pace was on and kept the horse out of it.”

“He likes Happy Valley and he likes the jockey also,” Lor said. “English jockeys are usually more relaxed and this horse is quite strong and a little bit keen, but this season he has improved and he’s more relaxed.”