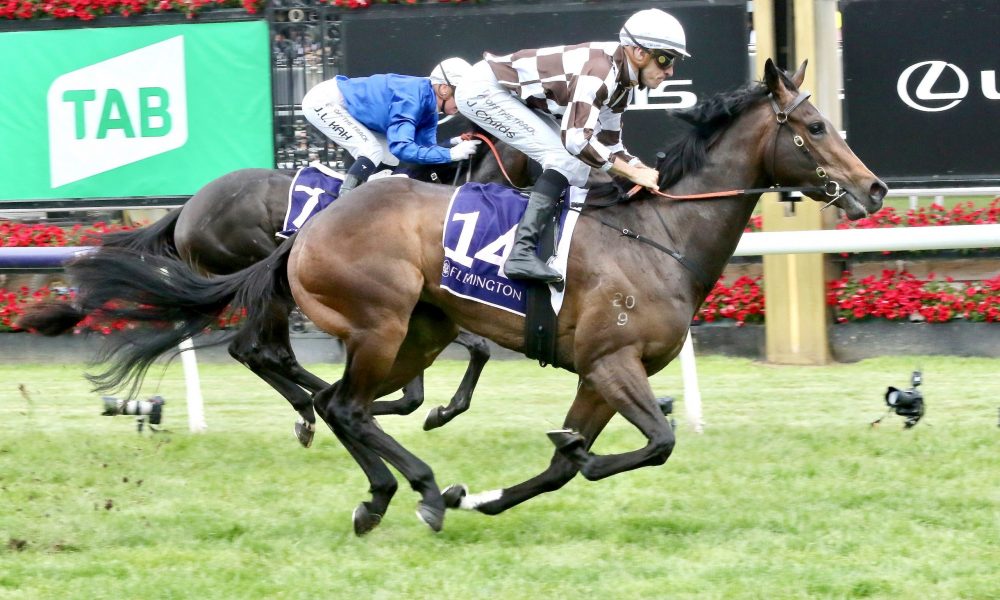 Farmers are all about growing things, and horse farmers are no exception, and nature being what it is, sometimes things don’t grow according to plan.

But for two men in the game, those sorts of earlier disappointments have borne some very promising fruit, which was on show again last Saturday.

And the Chequers Stud-made four-year-old mare Short Shorts (Iffraaj) stormed to an all-the-way 1400-metres win in the last race on Rosehill’s Four Diamonds card, following a Warwick Farm victory that made her just the second metro winner for her 22-year-old dam, Jabot (Green Perfume).

Neither was a convincing sale prospect as a yearling, for opposite reasons. Magic Time was progressing well, but a sudden, quite specific growth spurt at just the wrong time meant she didn’t sell, staying in the ownership of Milburn Creek. Short Shorts was looking very much in keeping with her future name, which helped convince Chequers’ Mark Fraser-Campin to keep her, racing her in partnership with her Hawkesbury trainer Brad Widdup.

Sent to Grahame Begg, Magic Time has now won two from two, and a sparkling future awaits. Short Shorts has won four from ten, and her trainer is contemplating black type.

A $300,000 purchase at the Magic Millions National Broodmare Sale of 2018, she was first sent to Hellbent – the son of Yarraman’s star turn I Am Invincible. Choosing the first-season Hellbent was largely based on Milburn being a shareholder in him, but in any case, it worked well… at first.

“On the physicals, we thought Hellbent would give the mare some leg. She’s a very correct and attractive mare, but she’s not very big,” Milburn’s Scott Holcombe tells It’s In The Blood.

“Everything was going well, she was entered for the Magic Millions sale, but three weeks out from the sale she started to really grow, and she went very bum-high.”

A reserve of $150,000 was set, but bidding only reached $110,000. Muir didn’t become Sydney’s largest Holden dealer without being a tough businessman.

“John just said, ‘I’m not budging off the reserve’,” Holcombe says of the now “tough and straightforward” filly who’s won $130,000, earned black type, and looks well on the way to reaping Muir several times more than that missed reserve.

Magic Time on Saturday ended an exasperating run of near misses in Hellbent’s quest for a stakes-winner. The 10-year-old – himself placed in two Group 1s before breaking through in the William Reid Stakes (Gr 1, 1200m) at his last start – finished second by winners among first-season sires last term. Yarraman’s $22,000 stallion went into last Saturday in the same situation on the second-season table, but with his CV bearing seven stakes placings.

Those included two in the space of three days earlier in last week’s Flemington carnival, with Awestruck running third in the Maribyrnong Plate (Gr 3, 1000m) on Cup day, and another two-year-old Hell Queen filling the same hole two days later in the Ottawa Stakes (Gr 3, 1000m). Just for further angst, two races after that, Hellbent’s three-year-old daughter Hell Hath No Fury, was fourth in the Desirable Stakes (Listed, 1400m), having run a Listed third at Sandown in September.

Milburn Creek did manage to sell Time Awaits’ second foal, a Zoustar (Northern Meteor) colt for $220,000 to Proven Thoroughbreds at this year’s Inglis Premier. Given Magic Time’s success, Time Awaits’ colt by the surging Dundeel (High Chaparral) should attract keen bidding in the new year, while much will also be anticipated of her year-younger colt by boom sire Maurice (Screen Hero).

Magic Time is not only straightforward in nature, she bears that sort of pedigree as well, with no mares duplicated in her first six generations. What the pedigree does show is the maxim that while duplicating Danehill can be a tricky exercise, you can repeat his sire Danzig as often as you like, with the great son of Northern Dancer (Nearctic) there four times, at 4Sx4Sx3Dx4D. Hellbent has a 3Sx3D cross of Danzig’s son Green Desert, while Time Awaits’ share comes through her grandsire Bianconi, and with Danehill her maternal grandsire.

Short Shorts hadn’t shaped as a sale prospect for more than just her short shape.

She did have some illustrious relatives. While Jabot won two minor races, second dam Riverly Lass (Gleam Machine) had thrown three stakes-winners. Vandalo (Van Nisterooy) scored in Listed class at Caulfield, and Amazing Me (Deputy Governor) at the same level at Whangarei, but the headliner was the latter’s full sister Zirna, who won the NZ Thoroughbred Breeders’ Stakes (Gr 1, 1600m) before becoming Champion Four-Year-Old female in Singapore/Malaysia in 2003. Zirna then threw Crafty Irna (Starcraft), the Ron Quinton-trained mare who won the Adrian Knox Stakes (Gr 3, 2000m).

Still, Jabot’s two best had excelled in Asia, with Short Shorts’ older full brother Sky Hero winning four times in Hong Kong, and War Dragon (Battle Paint) four times in Malaysia. That, and her four winners from 12 foals, meant her offspring immediately before Short Shorts – a filly by Battle Paint (Tale Of The Cat) – fetched all of $500 on Gavelhouse.

“Mark Fraser-Campin bred Short Shorts, and had all the family,” Widdup says. “She was for sale, but she was a bit of a late bloomer. Plus, a lot of the family had raced in Asia, so that meant she was under the radar a little bit.

“She was a bit underdeveloped as a young horse, and it can be a bit hard to sell those sorts of fillies, so Mark and I go way back, and he decided to hang on to her and send her to me.

“A lot of the Kiwi horses can be a bit late blooming. They’re trained off farms and not drilled as much as young horses here. But now, she’s a lovely, big, scopey filly, not a skinny little thing at all, and she’s showing a good bit of promise.”

After Short Shorts’ Saturday win by 3.3 lengths in a 1400-metre Benchmark 78, Widdup is contemplating stakes class, hoping she can grow into another high performing mare in support of his stable star, Group 1 winner Icebath (Sacred Falls).

“When you win a Saturday race in Sydney, you’re normally not too far away from stakes class,” Widdup said. “She’s entered again this Saturday, and if we do run, we’ll make a call after that about how far she goes this prep.”

A little like Magic Time, Short Shorts has a relatively clean pedigree, with a 4Sx4S cross of Mr Prospector (Raise A Native) and a 4Sx3S of Northern Dancer the only duplications in her first five generations.