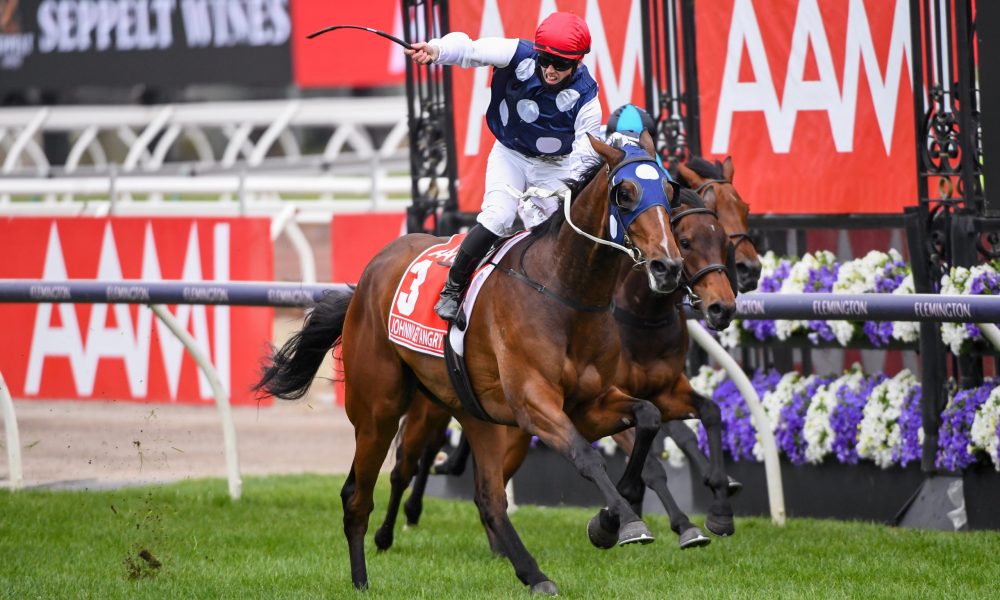 There were so many angles to the Victoria Derby (Gr 1, 2500m) win of Johnny Get Angry (3 g Tavistock – Luminova by Zabeel) that the fact he was a maiden taking out the blue-riband was almost overlooked.

In the last three decades, Fire Oak (Oak Ridge), Redding (Nassipour) and Preferment (Zabeel) had taken the Derby as a maiden, with the latter two developing into genuine weight-for-age performers.

It would be a victory for racing if Johnny Get Angry followed in their footsteps given he is owned and trained by two-time AFL premiership-winning coach Denis Pagan, one of Melbourne’s most popular sporting figures.

Pagan had only trained one winner before taking the Derby: Frankie Two Angels (Medaglia d’Oro) at Sandown in July.

Sent out as a $21 chance, having finished a fast-finishing yet distant third in the Moonee Valley Vase (Gr 2, 2040m), Johnny Get Angry looked the Derby winner a long way from home as Lachlan King cruised up on the gelding.

At the line, he had a length to spare over Hit The Shot (Dundeel) with lightly raced favourite Young Werther (Tavistock) a short neck away in third.

“I’ve hardly trained a winner and I’ve got a Group 1!” Pagan said. “I’ve never been emotional, I’ve been potting Chris Waller for sooking up but how well am I going?

“It was something special, I’d never in a million years thought it would happen and he’s done it. You dream about it and that’s all I’ve thought about for the last two months, getting him here, I just wanted to get him into the Derby and he’s won it. It’s just starting to sink in now, I can’t believe it.”

Bred by Greg Perry’s Greenwich Stud, Johnny Get Angry was offered for sale at the 2019 Karaka National Yearling Sale with a NZ$60,000 reserve, but was snapped up for NZ$50,000 by Malua Racing and Flemington Bloodstock.

Johnny Get Angry is the third foal to race – and the first winner – out of the Zabeel (Sir Tristram) mare Luminova, who was placed in maidens on both sides of the Tasman.

Luminova has a yearling colt by Cambridge Stud shuttler Almanzor (Wootton Bassett), who the farm announced would be sold at Karaka next year, while she lost a Reliable Man (Dalakhani) foal this year; she visited Reliable Man again in 2020.