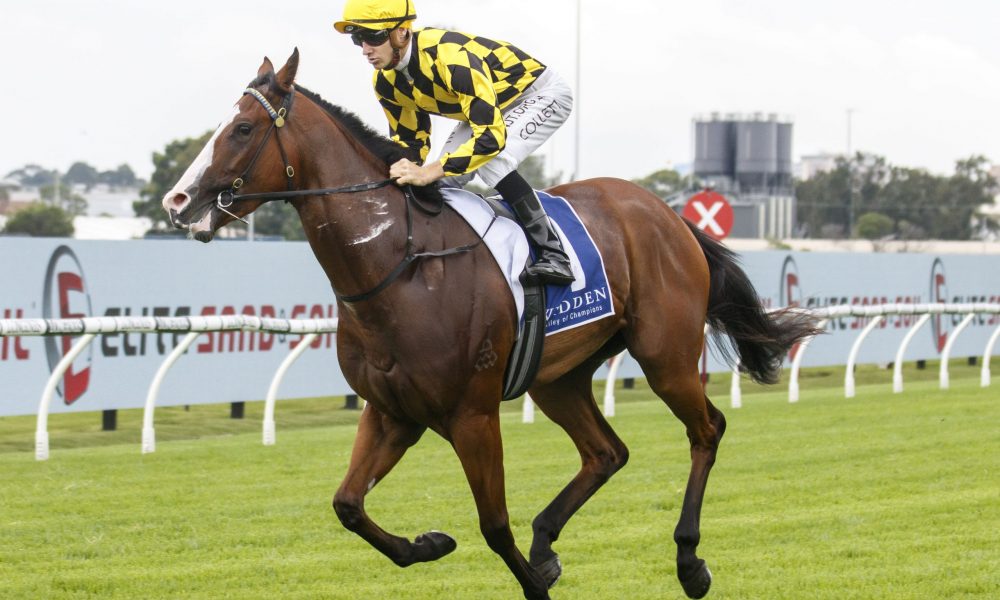 For the second time in three weeks, a youngster bred and raised on the famous Arrowfield pastures who was part of the stud’s draft that was withdrawn from last year’s Inglis Australian Easter Yearling Sale has earned the moniker of Maiden Of The Week.

Mallory (Not A Single Doubt) joined horses like Away Game (Snitzel), Mossfun (Mossman) and Overreach (Exceed And Excel) as a winner of the Widden Stakes (Gr 3, 1100m), scoring a length victory over leader Total Babe (I Am Invincible) thanks to a terrific Jason Collett ride.

The Gerald Ryan and Sterling Alexiou-trained Mallory was having her second start on Saturday, having finished runner-up in the Gimcrack Stakes (Gr 3, 1000m) on debut behind the current star of the juvenile crop, Enthaar (Written Tycoon).

“She is well schooled,” Alexiou said. “Jason got her into a nice rhythm. She held her spot on the fence and that big flashy white face looked good levelling out.

“They went along quick enough, they didn’t go slow or overly fast. I was more impressed knowing how much improvement she has in her. She will derive great benefit fitness wise from that. When she steps up to 1200 or 1400 metres you will see the best of her.”

“We just have to get over the weekend first,” he said. “We will speak to the ownership group and let her plot the best path. Whether we end up in a Slipper or Sires or sit back for the Percy Sykes, she will make a nice filly in time.”

However, Arrowfield principal John Messara instead suggested that he wants the filly to be given her chance in the Golden Slipper.

“We won the Percy Sykes with Shoals a couple of years ago,’’ he said. “If she is good enough I would like to aim her toward the Golden Slipper but it is up to my trainer.

“We will wait and see how she goes in her next couple of runs but that was a very, very professional performance today.”

Brought to Australia having been purchased by Jon Freyer for US$160,000 at the 2010 Keeneland November Breeding Sale, Panorama Ridge is herself a daughter of two-time French Group 1 winner Nebraska Tornado (Storm Cat), while it is also the family of Anothertwistafate (Scat Daddy) – who this month became that rare commodity to win stakes races on turf, dirt and synthetic – and Lexus Stakes (Gr 3, 2500m) winner Excess Knowledge (Monsun).

Panorama Ridge has a yearling colt by Pariah (Redoute’s Choice), who will be offered as Lot 233 at the Inglis Melbourne Premier Yearling Sale, while she was served by Dundeel (High Chaparral) in early September.