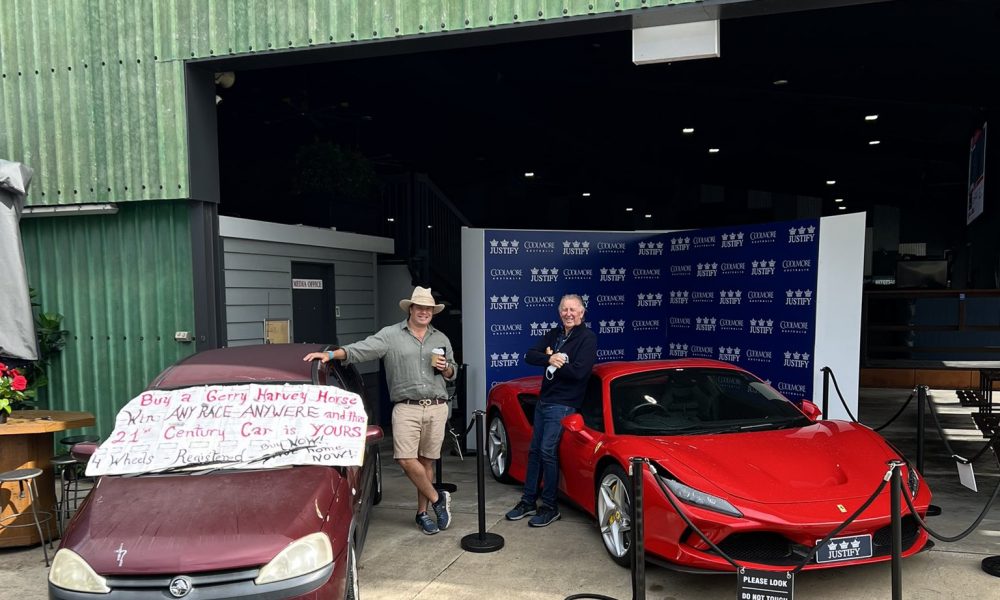 This week we have seen marketing geniuses at work in the lead-up to the Magic Millions Gold Coast Yearling Sale, which begins tomorrow.

Taking the prize for the best stallion promotion is Tom Magnier and the team at Coolmore Stud.

A red Ferrari will go to the owner of the first Justify (Scat Daddy) foal to win a selected two or three-year-old feature race and the clever initiative has lent itself to all sorts of super-charged social media content being generated in recent weeks.

The vision of young gun trainer Annabel Neasham driving the car at 250 kilometres per hour along the airstrip at Coolmore Stud in the Hunter Valley had plenty of people in awe.

And yesterday, Australian advertising legend John Singleton put his own cheeky spin on it all by driving a clapped-out old Holden car into the Bundall sales ground offering it up to anyone that buys a yearling off Gerry Harvey at the auction.

“You can see why Singo is as successful as he is. He drove the car into the complex to a huge round of applause. Now nobody can find the keys to it. It’s very clever.  We will be trying to buy one off Gerry but I am just not sure what we will do with the car,” Tom Magnier laughed.

Jokes aside, there is a genuine sense of excitement from esteemed judges about the first yearlings on offer that are by the US Triple Crown winner.

“The chat about the Justify horses here at sales is very exciting. All the top trainers have come to us about them this week. Everyone seems to want one in their yard – feedback has been very positive. A lot of people are saying they are athletic and look like sound horses,” Magnier told ANZ Bloodstock News.

“For us, we have bought all those high-quality mares a few years ago with this in mind. Hopefully, he has every chance of making it. People like Chris Waller and Gai Waterhouse are coming to us and saying they really like the Justifys.

“Let’s hope he has a good sale and what happened in the northern hemisphere happens here.”

Fittingly, the first lot to go through the ring during the opening session of the sale is a Justify colt out of Eckstein from the Coolmore draft.

“He is a very nice horse, hopefully, he sells well. He’s had a stone bruise so we couldn’t show him over the past couple of days.”

While promoting Justify has been a top priority for Magnier in recent days, his focus has also been on 13-year-old son Charlie who competed in yesterday’s inaugural Coolmore Magic Millions Showjumping event at Doug Jennings Park.

He competed in the Individual Youth event and jumped clear in the first round but pulled a rail in the jump-off.

Charlie is very passionate about the sport and has been based in Europe during the past couple of months competing on the junior showjumping circuit there to sharpen his skills in the saddle.

“He is so passionate about it and he loves it. He gets up at the crack of dawn before school each day. Sophie and he head off driving across the country for hours on end. There are definitely worse ways to spend your early years.”

It was the first time that Magic Millions’ supremos Katie Paige and Gerry Harvey have conducted a showjumping event in conjunction with the popular polo tournament that has traditionally taken place on the Sunday prior to the sale for a number of years.

Magnier says it’s a clear sign that the innovative pair are going to get behind the sport in a major way in the not too distant future.

“It’s important to get behind the showjumping here in Australia. The best riders in the past have left and gone overseas to ride in Europe and the USA. Fair play to Katie, she sees that first hand and has decided to do something about it. When she gets behind something, we all benefit.

There’s little doubt that Coolmore Australia will also be throwing its considerable weight behind the sport.

“Australia has some great riders. We need to support these riders and give them something to aim at and help grow the sport here at home.

“It’s a great way to give ex-racehorses a new life as well so that’s important,” he said.

Hats off to the team at Magic Millions. They are at the forefront of thinking when it comes to building strong links between racing and other equestrian sports. It’s been a long time coming, but finally, we are seeing more events like yesterday taking place that showcase the love of the horse that we all genuinely share.