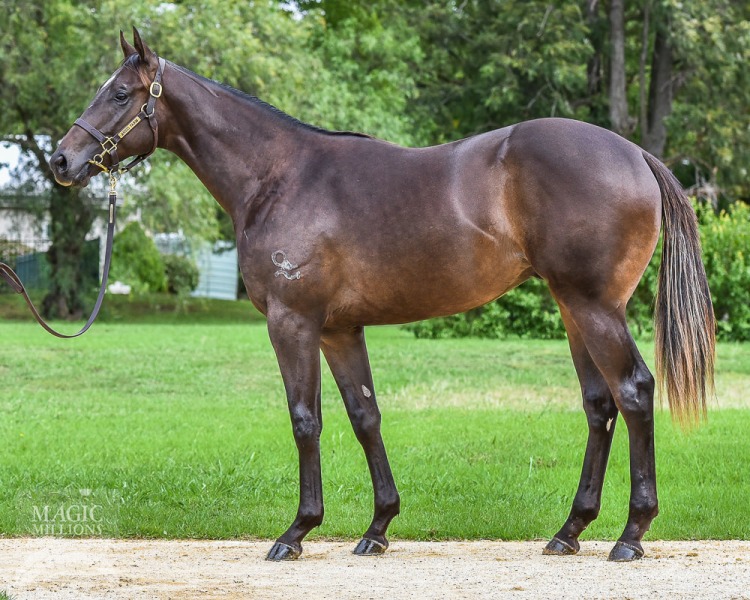 A little like his novelist namesake, colourful horse trainer Graeme Green has a penchant for turning something out of nothing.

Some 35 years ago in his then home town, the country racing hub of Grafton, needing to supplement his income from a small string of gallopers, Green saw an opportunity no one had previously spied.

It wouldn’t take him away from his horses, for it was nighttime work, and wouldn’t be too taxing on time. It’s hard to imagine Tommy Smith or Bart Cummings giving this a go, but Green became the town’s very first male stripper.

Now based in Rockhampton and in his mid-60s – he probably wouldn’t try it again these days – Green looks back on his time in the buff in no abashed way. If anything, there’s an element of pride in being the first bloke in Grafton to see this kind of gear change as a revenue stream.

“I was between marriages and a bit short of money, and the opportunity came up to do a few shows, so I did it,” Green tells It’s In The Blood.

“I used to do 21sts, hen nights, parties. I was young and silly and full of testosterone, so it seemed a fair idea. Plus, I always wore a mask. That and a G-string were the only things that stayed on, so no one knew who I was.

“It was all good fun. I had a couple of slow horses, and a couple of good ones, but I was going through a quiet period. Sometimes you’ve got to do different things to supplement your income.”

Decades later, happily married and content to inhabit different kinds of stripping sheds, Green has again spun something out of just about nothing. He’s taken a yearling who cost just $10,000 and won nearly $800,000 in prize-money.

Master Jamie (Poet’s Voice), was picked up for a steal at the Magic Millions Gold Coast March yearling sale in 2018. Aquis Farm – officially the breeder after buying his Flying Spur (Danehill) dam Verkko in-foal from Attunga Stud – had entered him for earlier sales.

“He was a really nice yearling, good sized and athletic, and he would’ve made a lot more money at another sale but he hurt one of his hind legs and had a soft tissue scar,” says Aquis’ director of sales Jonathan Davies. “He was also moderate to high risk on x-rays, and that turned a lot of people off.”

Not Green, who swooped to close the deal after bidding had stalled at $8,000. He’d in fact snatched a colt who was very well bred, and whose relatives now include VRC Oaks (Gr 1, 2500m) winner Personal (Fastnet Rock), outstanding two-year-old colt Sejardan (Sebring), and a champion South African sprinter, Laisserfaire (Danehill).

“I thought he was the colt of sale, really. I don’t know why he was so cheap,” Green says. “He had that scar on his hind leg, but that was just superficial. He was very open in the knees, but there were no issues with him. The x-rays weren’t 100 per cent, but if you go to sales to buy a horse with perfect legs, you’re going to leave empty handed.

“And I do like the March sale because of it being tied in with the QTIS bonus scheme, which is a fantastic system. It provides us northern trainers with the bread and butter horses we need. Not too many can afford to go to January and pay the big money.”

Green – a relative and admirer of late Sydney trainer and renowned apprentices’ mentor Theo Green – had picked two colts at the sale. But when he saw his good friend, Brisbane trainer Kelly Schweida, bidding keenly on the colt by Better Than Ready (More Than Ready), he knew he wouldn’t have the capital to match him.

“So I went for the Poet’s Voice, and not many others did,” Green says. “And there was nothing wrong with him! Just a lovely, big, strong colt. I did have to geld him pretty quickly though, because I felt he’d get too big and too heavy, but everything went smoothly.

“We broke him in ourselves, and everything you showed him, he’d just pick it up really quickly. He was always a very smart and kind horse, and from day one he showed he was going to do something.”

That yearling Schweida bought, for $30,000, became The Odyssey, winner of three major QTIS races at the Gold Coast, and $1.75 million before retiring to stud at Dan and Rae Fletcher’s Telemon Thoroughbreds this year.

But Master Jamie quickly showed he, too, was no slouch. He was also tough. He won no fewer than six races as a two-year-old, usually by gaping margins. His only first-season blemish was a third at his second start when Green, buoyed by a six and three-quarter length Rockhampton romp on debut, took him to Doomben, where he ran third.

That track has proved his bogey venue ever since, with two minor placings and four abject failures, contrasting the roomier Eagle Farm, where he’s won three from seven.

“I think it’s to do with the track profiles and surfaces of Doomben and Eagle Farm,” says Green, who knows a bit about it; he was Rockhampton’s course curator for some 15 years while wife Julie did the training, despite being a newcomer to racing when she met her husband.

Resuming training in 2017, Green now has 13 horses on his books, six of them yearlings, reflecting some of the purchasing power afforded by Master Jamie.

He fast became the Rockhampton Rocket, winning 11 of 14 through his first three preparations. Now five, he’s won 17 from 42, been twice Listed placed, and while previously sticking to sprints, his past two starts have brought home track victories in his first attempts at 1600m – in a handicap under 65.5 kilograms, then the Rockhampton Cup on July 9.

“We had an enquiry from Hong Kong when he was two,” says Green. “There was no money mentioned but we rejected it straight away. When you find a horse like this, at my age it may never come again. We race for the love of our horses, and my owners are the same.”

He essentially trains for one set of owners, and the team forms a trio of “colourful racing identities” in the best sense: Green, White and Olive.

They are Ron White, former Rockhampton Jockey Club deputy chairman, his wife Bev and her sister Maureen Olive. The three routinely register as the buyer of yearlings, and that was the case with Master Jamie, but on this occasion Olive opted to then stay out of the ownership, leaving just the two-toned Green and Whites, with Olive no doubt still kicking herself.

But while the story of Master Jamie and his one-time male stripper trainer reads as a tale of a cheap bush battler made good, there are some potent bloodlines behind the bay.

He’s from the fourth Australian crop of Poet’s Voice (Dubawi), the Group 1-winning British miler who shuttled for five seasons for Darley, but suffered a fatal heart attack in Britain in 2018, aged 11.

Green was prompted to punt on the colt by the deeds of first-cropper My Country, a Peter and Paul Snowden-trained filly who won in Listed class at the Brisbane winter carnival of 2016.

“It was an unusual sireline, Poet’s Voice,” says Green, a father of five. “No one knew much about him, but our youngest daughter was working for Peter Snowden at the time, so I knew My Country.

“So I looked into Poet’s Voice and he was a magnificent horse in Europe. And while the dam, Verkko, only won a low maiden from 12 starts, I just love the Flying Spur broodmare line. To have him as close as the broodmare sire was a bonus.”

Poet’s Voice is now best known here for 2018 Mackinnon Stakes (Gr 1, 2000m)-winner Trap For Fools – one of his two Group 1 winners worldwide – and for six-time stakes winner Viridine. It’s fair to suggest Verkko brought more to the party than her non-TAB win at Mortlake, Victoria.

Verkko, whose five foals to race have all won, is from the unplaced Last Tycoon (Try My Best) mare Sybarite, a half-sister to Australian stakes-winners Time Thief (Redoute’s Choice), his full sister A Time For Julia, Foreplay (Danehill) and Personify (Galileo), dam of Personal.

As ever, you never know where a good horse will emerge. But for a leg scar, Master Jamie would probably have sold for many times more, and to a big city stable. Green, eyeing a second straight win in Townsville’s Cleveland Bay Handicap (1300m) on August 6 among many more likely victories for his durable gelding, is very pleased he didn’t.