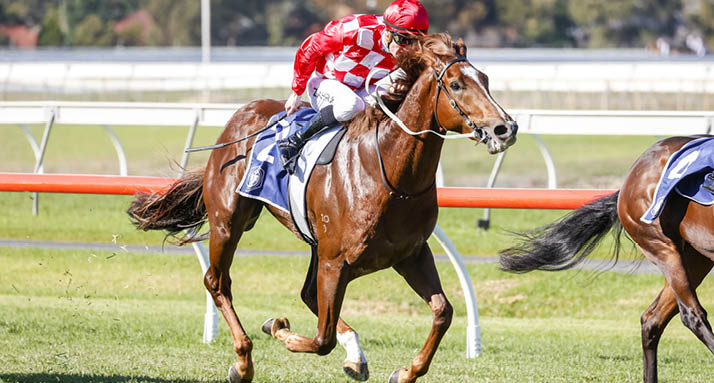 A horse that is bred to be a future star earns Maiden of the Week status after taking a first impressive step towards greatness when winning the David Coles AM Stakes (Gr 3, 1200m) at Morphettville on Saturday.

Maximillius, who derives from one of the most potent families in the stud book, defied two previous defeats to lead all the way and breakthrough at Group 3 level. The juvenile will now be set for a Caulfield Guineas (Gr 1, 1600m) campaign in the spring.

The son of champion sire Written Tycoon (Iglesia) held off the challenge of the Richard and Chantelle Jolly-trained duo See You In Heaven (Divine Prophet) and Aitch Two Oh (Headwater) to win by a head and a length and a half.

“The horse is a colt, we had a big opinion of him and we lost our trust in him because he let us down a couple of times. We fiddled around with a bit of gear for no other reason than to just try and get him to do his best,” co-trainer Mick Price told Racing.com.

Bred by Robert Crabtree’s Dorrington Farm, Maximillius is the third two-year-old stakes winner this season to emanate from the famed Victoria property, and also adds to the Champagne Stakes (Gr 1, 1600m) victory of She’s Extreme (Extreme Choice) in his red and white chequered silks this season.

Indeed, such was the confidence of Crabtree in the ability of Maximillius, that more than a month before his Group 3 success the breeder had his name added to a commemorative plaque of horses deriving from his mare Scandinavia – sitting alongside Black Caviar, All Too Hard (Casino Prince), Ole Kirk (Written Tycoon) and Semillion (Shalaa).

After foals by Pierro (Lonhro), Medaglia D’Oro (El Prado) and Sebring (More Than Ready) within her first four covers, Scandiva has since been covered by Yulong’s Written Tycoon, in a nick that is clearly delivering success.

She has a weanling colt by the stallion and was covered in November by Written Tycoon.