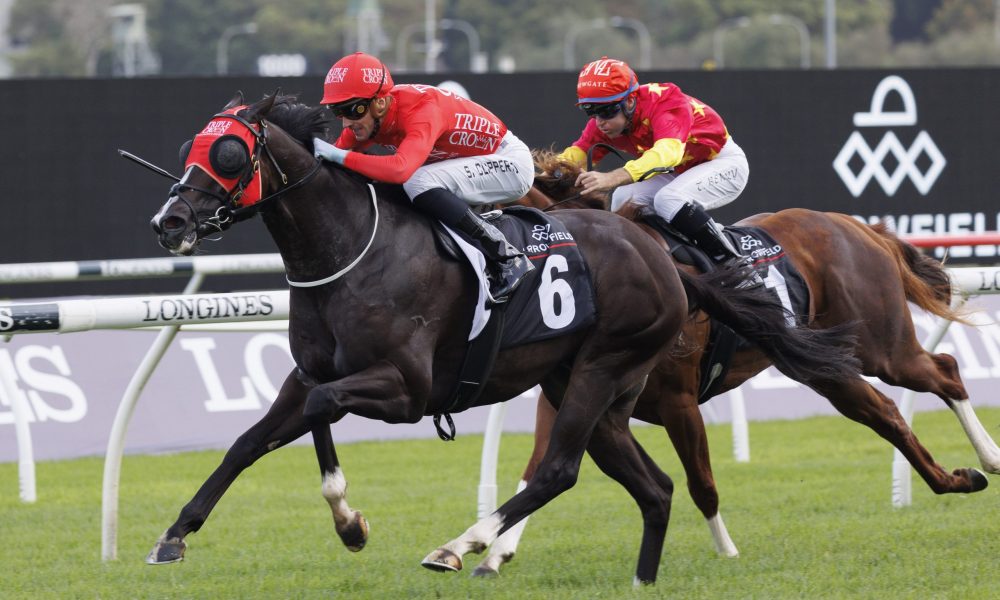 It’s been a very long time between drinks but a foal she had when she was 19 has brought the dam of Headway a second Group winner, 13 years after her first.

A punt by the owners of Chatelaine on a little known Japanese sireline, mixed with an educated gamble by Arrowfield Stud that the sire in question, Maurice, would blend well with Danehill-line mares, have combined to produce Mazu.

The exciting gelding followed three Listed victories by taking his fifth straight win last Saturday in the Randwick Group 2 appropriately bearing the title of the Arrowfield 3YO Sprint. He’s now likely bound for next month’s Doomben 10,000, and probably The Everest.

There was also speculation, as ever, at the yearling sales when Triple Crown Syndications purchased the then colt for $180,000 at Inglis Classic in 2020.

Many buyers swear by first or second foals, and won’t look at those lower down the birth order. Mazu was the ninth living foal – two others didn’t make it – of Chatelaine, a dual city-winning, multiple stakes-placed mare by one of Danehill’s finest broodmare sire sons, Flying Spur.

Owned by the redoubtable Stuart Ramsey of Turangga Farm, Chatelaine began her breeding career superbly by leaving Headway (Charge Forward). The Peter Moody-trained, Tony Santic-owned filly carried Makybe Diva’s colours to give her dam one stakes-winner from one runner – way back on February 28, 2009. She later brought larger spoils by taking that spring’s Group 1 Coolmore Stud Stakes.

After that, however, Chatelaine’s progeny went quiet. Moody bought her second foal, Headway’s full brother, for $500,000, but the gelding named Beckon won just four from 34, with one city victory.

Five fillies came next – a streak that now seems anomalous – and they managed one win among them, that coming at Canterbury following the return to Charge Forward that produced Empress Matilda.

Chatelaine was sold off in a Turangga dispersal in 2017, bought for $54,000 by Parson’s Creek Farm two years after its founding. The novice breeders opted for a fourth return to Charge Forward. That yielded a colt who, reflecting Chatelaine’s breeding fortunes, fetched $40,000 at Classic 2019. But for a second mating, in 2018 Parsons Creek sent their mare to Arrowfield’s new Japanese shuttler, Maurice, which produced the colt presented at Classic 2020, who became Mazu.

“A lot of people don’t like later colts,” Triple Crown’s Michael Ward tells It’s In The Blood. “We try not to be bound by those sorts of old rules, and keep an open mind.

“Chatelaine’s offspring after Headway hadn’t done a great deal, but those weren’t the ones we were buying. For us, it came down to the fact that this was a very well-balanced, well-conformed individual, who was very athletic. He ticked a lot of boxes for us on the combination of pedigree and type.”

Screen Hero was the Japan Cup winner, and his country’s Best Older Male, in 2008. The US-bred Grass Wonder (Silver Hawk) won four Japanese Group 1s but was unknown in Australia, evidenced by four seasons shuttling as a sire here – from 2003-06 – in which he left 171 live foals for no stakes winners.

Still, Arrowfield had faith Maurice would work here, and that’s starting to be repaid in spades. The 11-year-old is now top of the Australian Three-Year-Old and Second Season sires tables. He’s been boosted mostly by dual Derby winner and potential superstar Hitotsu, who, like Mazu, has a damsire by Danehill, in Redoute’s Choice.

“When we took Maurice on, Screen Hero had had very minimal exposure to Danehill line mares. There weren’t that many in Japan,” Jenkins says.

“But looking at his pedigree I felt he was right for more Danehill to be introduced. Screen Hero’s out of a mare by Sunday Silence, who’s by Halo, who’s from Danehill’s family. And there was also Roberto (Silver Hawk’s sire) and Sadler’s Wells (Maurice’s maternal great-grandsire), who we know cross very well with Danehill.”

Most importantly, Maurice’s grandsire, the aforementioned Grass Wonder, is from a mare in Ameriflora who is a three-quarter sister to Danehill, both of them being by Danzig and out of mares by His Majesty (Ribot, 1968). That raised the prospect of some tantalising matings with Danehill-line mares in Australia.

“We know the importance of the intricate genetic relationship, where two individuals, one on each side of a pedigree, share a very similar genetic make-up,” Jenkins says. “This told me Danehill was going to be a good match for Maurice, pretty much at random across the broodmare population. It’s early days of course but the two that have worked are Danehill-line mares with Mazu and Hitotsu.”

There’s also two-year-old colt Matcha Latte, out of a Redoute’s Choice mare, who was third in last month’s Group 2 Schweppervescence behind Williamsburg.

For Parson’s Creek Farm, who bought Chatelaine and All Night Girl (Manhattan Rain) from Turangga’s dispersal as their two foundation broodmares, the move has worked especially well.

Operations manager Jo O’Gorman – whose parents Marc and Lindy De Stoop bought out and began transforming 330 acres of dairy farms and vineyards to create the stud seven years ago – comes from a background in events and marketing. She’s been studying breeding ever since, but in 2017 was still quite new to the game. Not that that would’ve necessarily impacted on her knowledge of Maurice.

“We went to a stallion parade at Arrowfield,” she recalls. “We didn’t know much about Screen Hero and Grass Wonder, like most people, but looking at Maurice as a stallion, we were just taken away by his looks.

“And having that Japanese lineage was very impressive and something a little different and new and exciting compared to where Chatelaine had been before. We did our research, we really liked him and he was quite affordable.”

“We sent her to Charge Forward. We were hoping to breed a full-sister to Headway, to keep the family going, but we got a colt,” she says of that $40,000 yearling who’s become the decently-performed The Cruiser, winner of three from 18 including at Sandown last month.

“We tried again with Maurice and got another colt, but that’s Mazu, so definitely no complaints there. We wouldn’t have thought of keeping a share so early in our career as breeders, but he was such a lovely foal and showed such ability as a yearling that we stayed in for a quarter,” O’Gorman says. “The mating really worked well.”

Parsons Creek, which sold a Trapeze Artist filly for $180,000 in its Inglis Easter debut last week, has kept breeding with Chatelaine, who in this second phase of her broodmare career seems intent on leaving colts. Since Mazu, she’s thrown one by Toronado, and is now in foal to King’s Legacy. This will be her last chance to leave one more filly.

“We wouldn’t have gone ahead with it unless the vet gave her the all clear,” O’Gorman says. “But she had a really good foaling with Toronado, and she loves being a mum, and the vet said she was fine.”

Ward, meanwhile, hopes Mazu, who’s “likely” progress to the Doomben 10,000, might not only eclipse his big, big half-sister Headway, but also be at the forefront of a new Australian sprinting landscape.

“I think we’re about to see a bit of a changing of the guard,” Ward says, in a nod to topline short-coursers like eight-year-old Eduardo and seven-year-old Nature Strip. There could be some symbolism there if Mazu can follow Nature Strip as champion of The Everest. Triple Crown – which won the first two of them with Redzel – is already fielding interest from Everest slot-holders.

“A number of people have been touching base since Saturday to see,” he says. “We’ll see how we go, but he does have the right profile.”

Victory there would be some validation indeed for Arrowfield’s faith in Maurice, who could now easily draw far more than the 156 mares he covered last year but will be limited to 120 by his Japanese owners, a move the stud believes will ensure a book of the utmost quality.

And it would be a spectacular feather in the cap of a 23-year-old mare in a paddock in the Hunter Valley around the time she throws her last foal.