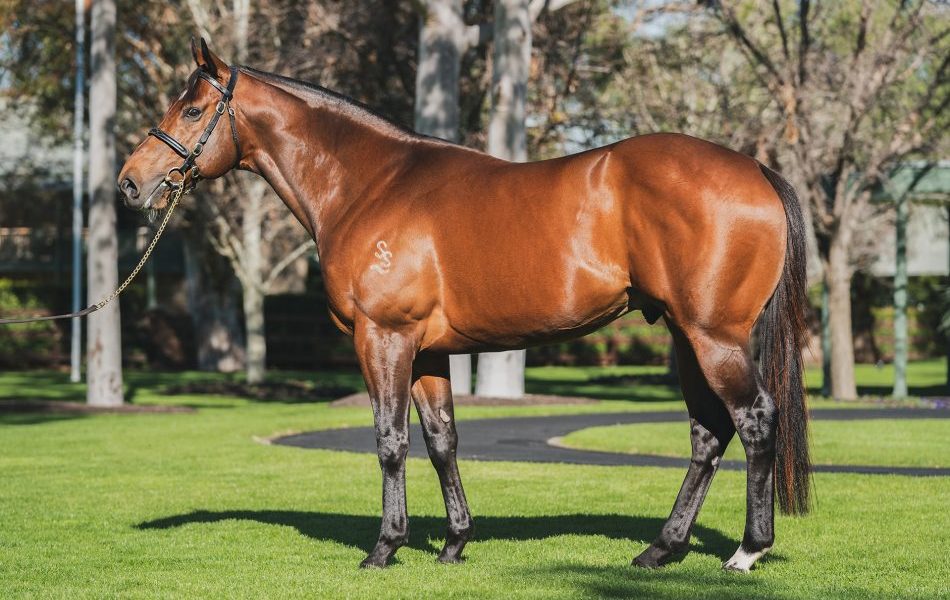 Merchant Navy (pictured above) – Coolmore’s dual-hemisphere Group 1-winning sprinter Merchant Navy (Fastnet Rock) is off the mark, siring his first juvenile winner courtesy of a win by Galaxy Affair (2 g ex Wild Ava by High Chaparral) at Ascot. Trained by Daniel and Ben Pearce, the gelding was able to score over Upper LImits (Exosphere) and Lucky Sue (Lucky Street) at his second start. Galaxy Affair was bought as a weanling by Danny Coyne for $42,500 at the 2020 Inglis Digital June Sale. Galaxy Affair’s yearling half-sister by Performer (Exceed And Excel) made $14,000 at the Magic Millions National Weanling Sale last year. Merchant Navy, who is also the sire of ATC Gimcrack Stakes (Gr 3, 1000m) runner-up Drisana, had yearlings sell to a top of $700,000 at the Magic Millions sale last week.

The Mission – Altar Boy (2 g ex Julia’s Music by Unbridled’s Song) took out the Colliers International Maiden (1000m) at Townsville and in doing so became The Mission’s (Choisir) fourth individual winner as a sire. Having his fourth career start, the Sarah Acornley-trained gelding took time to wind but charged home late to take the spoils by half a length from Mr Whittington (Whittington), with Our Addiction (Falvelon) a length behind the winner in third. The Mission is now sharing top spot in the first season sire table (by winners) alongside fellow Aquis Farm stallion Invader (Snitzel). Altar Boy, an $8,000 purchase at the Inglis June (Late) Online Sale, is a half-brother to the two-time winner Choirboy (Divine Prophet), from the family of US Grade 1 winners Emcee (Unbridled’s Song) and Constitution (Tapit). The Mission stands at Aquis for a fee of $8,800 (inc. GST).

Darci Brahma – The Jamie Richards-trained Hanalei (2 f ex Lucrative by Pyrus) produced a dominant display to win the Wellesley Stakes (Listed, 1100m) at Trenham and in doing so became individual stakes winner number 54 for The Oaks Stud resident Darci Brahma (Danehill). The two-year-old filly finished a good second behind stablemate Maven Belle (Burgundy) on January 3, but she shed her maiden status in fine style when swooping to an easy three and a quarter length win over Charmario (Charm Spirit). Zaher (Proisir) finished another half a length away in third. Bred and raced by the winning trainer’s parents Paul and Leanne Richards, along with Bill and Sandra Duell, Hanalei is out of the Pyrus (Mr. Prospector) mare Lucrative and is a half-sister to stablemate Cote De Beaune (Burgundy), who retained his unbeaten record in the preceding event on the card. Darci Brahma has eight yearlings set to be offered at Book 1 of the New Zealand Bloodstock Karaka Yearling Sale, which gets underway on March 8.

Dark Angel – Yeomanstown Stud’s stalwart stallion Dark Angel (Acclamation) was represented by his 81st individual stakes winner when the Doug Watson-trained Golden Goal (8 g ex Golden Rosie by Exceed And Excel) broke through at black type level in the Al Maktoum Challenge R1 Presented By Nakheel (Gr 2, 1600m) at Meydan. Sent off the unfancied 28-1 shot, Golden Goal stayed on strongly to beat Secret Ambition (Exceed And Excel) by a length and a half with Kafoo (Curlin) another three and a quarter lengths away in third. The gelding is one of three winners out of the winning Exceed And Excel (Danehill) mare Golden Rosie and she is the grandam of Listed scorer Louliana (Acclamation), while this is the extended family of Group 2 winner Sovereign Debt (Acclamation). Dark Angel’s Group 1-winning progeny includes Harry Angel, whose first crop of southern hemisphere-bred yearlings have been well-received at the Magic Millions Gold Coast Yearling Sale this week, with 15 selling for an aggregate of $2.925 at an average of $195,000.

Footstepsinthesand – Having been narrowly denied black type when narrowly beaten at Listed level at Deauville last month, Pevensey Bay (6 m ex Pachelbelle by Anabaa) added a valuable stakes success to her CV when she took out the Cape Verdi (Gr 2, 1600m) at Meydan and in the process handed Castlehyde resident Footstepsinthesand (Giant’s Causeway) with his 68th individual stakes winner. The six-year-old mare was given an ice-cool ride by Olivier Peslier, coming from last to first to beat Ascot Brass (Juniper Tree) by three-quarters of a length with Wedding Dance (Invincible Spirit) a further half a length away in third. Bred and raced by Jon and Julia Aisbitt, Pevensey Bay is the only winner out of the placed Anabaa (Danzig) mare Pachelbelle and hails from the same family as Group 1 winner Rouvres (Anabaa).

I Am Invincible – King Of Sparta (3 g ex Octavia by Holy Roman Emperor) earned Yarraman Park Stud stallion I Am Invincible (Invincible Spirit) a 73rd individual stakes winner when claiming the Magic Millions 3YO Guineas (RL, 1400m) for the Peter and Paul Snowden stable. A $700,000 buy for China Horse Club and Newgate Farm from the 2020 Magic Millions Gold Coast Yearling Sale, King Of Sparta is the fourth foal out of Group 3 winner Octavia (Holy Roman Emperor), with the gelding a brother to the Sydney metropolitan winner Ljungberg. Octavia has an I Am Invincible foal at foot and was placed back in foal to the stallion in the spring, while her Zoustar (Northern Meteor) yearling colt was withdrawn from this week’s Magic Millions sale. I Am Invincible stands at Yarraman Park for a fee of $220,000 (inc GST).

King Kamehameha – The Naosuke Sugai-trained Ruby Casablanca (5 m ex Mood Indigo by Dance In The Dark) added a stakes win to her CV when she was triumphant in the Aichi Hai (Gr 3, 2000m) at Chukyo and in doing so handed the late stallion King Kamehameha (Kingmambo) his 91st individual stakes winner. The five-year-old mare came out on top of a blanket finish, defeating Maria Elena (Kurofune) by a head, while Des Ailes (Deep Impact) was a further neck away in third. Ruby Casablanca is a sister to Grade 2 winner You Can Smile, with the pair being two of five winners out of the Grade 3-scoring mare Mood Indigo (Dance In The Dark), who is herself a daughter of dual Italian Group 3 winner Leap For Joy (Sharpo). King Kamehameha died at Shadai Stallion Station in 2019.

Mongolian Khan – The Stephen Marsh-trained Bankers Choice (4 g ex Signorina by Conatus) made his first foray into stakes company count when he took the Anniversary Handicap (Gr 3, 1600m) at Trentham and provided Windsor Park Stud-based sire Mongolian Khan (Holy Roman Emperor) with his first individual stakes winner. The four-year-old gelding came into the race off the back of a victory over 1500 metres at Ellerslie and he had no issues with the major step up in class, beating Coventina Bay (Shamexpress) by three-quarters of a length, while Germanicus (Rip Van Winkle) was a further three and a half lengths adrift in third. Bred and raced by the Kearneys under their Okaharau Station banner, Bankers Choice is the younger half-brother to the talented Carl Henderson-trained five-time winner Jodelin Gal (Swiss Ace), who will attempt to add further black type into the family in the Westbury Classic (Gr 2, 1400m) at Ellerslie next Saturday. Mongolian Khan will be represented by nine youngsters entered at the New Zealand Bloodstock Karaka Yearling Sale which kicks off on March 7.

Orfevre – Lilac (3 f ex Viva Bouquet by King Kamehameha) provided her sire Orfevre (Stay Gold) with a 17th individual stakes winner when winning the Fairy Stakes (Gr 3, 1600m) at Nakayama. Trained by Ikuo Aizawa, the three-year-old filly managed to hold on well to beat Stars On Earth (Duramente) by a neck with a further length and a quarter back to Bijou Noir (Kitasan Black) back in third. The fourth foal out of winning mare Viva Bouquet (King Kamehameha), Lilac is closely related to Group 3 winner Black Hole (Gold Ship) and to two-year-old winner Miracle Blood (Dream Journey). Orfevre currently stands at Shadai Stallion Station for a fee of ¥3,500,000 (approx. AU$424,735).

Shamexpress – Windsor Park Stud resident Shamexpress (O’Reilly) chalked up his seventh stakes winner when his son Shamus (3 g ex Chesapeake by Per Incanto) took his unbeaten record to four with a win in the Wellington Guineas (Gr 2, 1400m) at Trentham and he has now been installed as the outright favourite for the New Zealand Derby (Gr 1, 2400m). Stepping into stakes company for the first time, the Allan Sharrock-trained three-year-old gelding stayed on well to beat Pareanui Bay (Lonhro) by a length with Sassy Merlot (Burgundy) a further length and a quarter back in third. “He’s a serious racehorse,” the winning trainer said. “This was the race where he had to put his hand up, and he’s done that. He’s put his hand up and said, ‘I’m the man.’ He knows he’s a good horse, he’s got a bit of a swagger.” Sharrock purchased the gelding for $85,000 at the New Zealand Bloodstock Ready To Run Sale last year from the Woburn Stud draft and he is out the unraced Per Incanto (Street Cry) mare Chesapeake.

Proisir – Rich Hill Stud resident Proisir (Choisir) was provided with his first Group 1 winner when the Ken and Bev Kelso-trained Levante (5 m ex Island Doy by Doyoun) came out on top of a close finish in the Telegraph Stakes (Gr 1, 1200m) at Trentham. After being sent for home at the top of the straight, Levante looked to have the race at her mercy, but Roch ‘N’ Horse (Per Incanto) burst from the pack and the pair were locked in an thrilling battle up the straight, with Levante eventually clinching victory by a nose. Mascarpone (Shooting To Win) was another two and a quarter lengths further back in third. The Rich Hill Stud-based sire Proisir has sired seven stakes winners overall and he has nine lots catalogued at Book 1 of the New Zealand Bloodstock Karaka Yearling Sale, which gets underway on March 7.