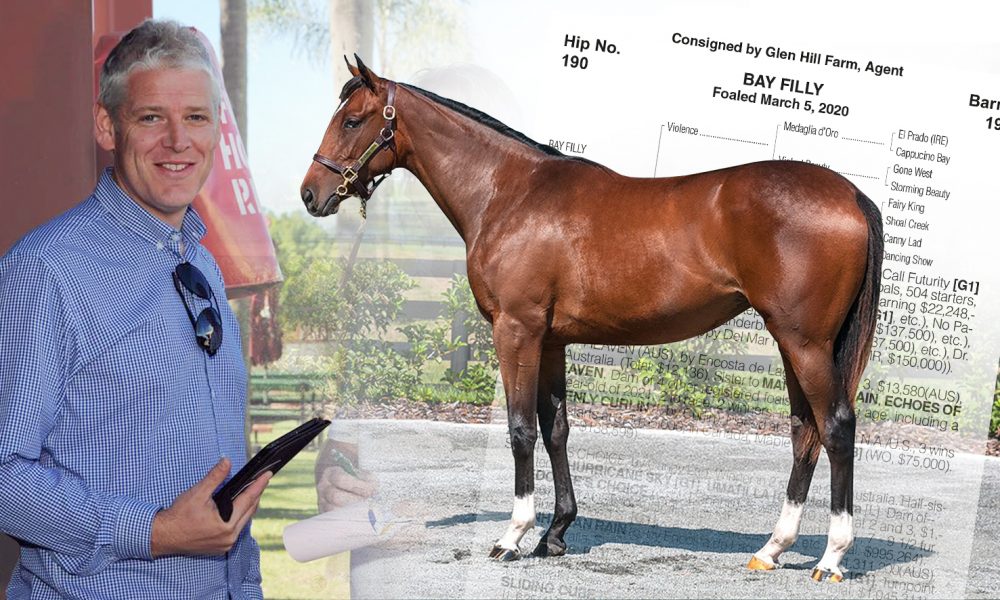 The US-bred Violence (Medaglia D’Oro) filly with one of the biggest pedigrees in the Australian Stud Book will be coming Down Under to race after the buyer behind her US$200,000 (approx. AU$272,000) acquisition from the Keeneland September Yearling Sale declared her purchase “a free hit”.

Victorian agent Sheamus Mills broke new ground by entering the northern hemisphere yearling market with a view of targeting a filly to race in Australia and he landed on the Keeneland Session 1 Glen Hill Farm-consigned filly who descends from the family of Redoute’s Choice (Danehill).

And the filly’s Grade 3-winning older half-sister Heavenly Curlin (Curlin), who was victorious three times in Canada, is also now in the hands of Australian interests after Rosemont Stud bought her privately following her last race start on June 26 in a deal brokered by agent Will Johnson.

She is likely to be covered by Juddmonte Farm’s Frankel (Galileo) to southern hemisphere time in the near future.

Mills, soon after buying the Violence daughter of winning mare Taste Of Heaven (Encosta De Lago) yesterday, revealed that she would be trained by Mick Price and Michael Kent jnr in Victoria.

The March 5-born filly is the fifth foal out of Taste Of Heaven, who is a sister to Manhattan Rain and Echoes Of Heaven and a granddaughter of breed-shaping mare Shantha’s Choice (Canny Lad).

Shantha’s Choice is, of course, the dam of five stakes winners headed by the late champion Arrowfield Stud sire of sires in Redoute’s Choice (Danehill). She was catalogued as Lot 190.

“Obviously it is a bit left-field with that stallion Violence, but I bought a really nice Violence mare out of Keeneland a couple of years ago and brought her out here and put her in foal to Written Tycoon,” Mills told ANZ Bloodstock News.

“She’d make that if you put her back through Magic Millions or one of the other broodmare sales down here.”

The boys Mills referred to are loyal clients Heath Newton and Anthony Roberts, who race a number of horses together including the Price and Kent jnr trained Thousand Guineas (Gr 1, 1600m) winner Odeum (Written Tycoon). The agent may also sell down a percentage of the filly to other clients, but suggested she could sport the same colours as her soon-to-be older stablemate Odeum.

“I had a bloke over there, Jared Hughes, who is a good judge, and looking at her being six months behind you would have to think that she is a three-year-old (at the earliest),” Mills said.

“We will tip her out and give her time. Whether she would be a spring three-year-old or an autumn three-year-old, I don’t know, but looking at her physically, some horses you need to be winning two-year-old races with (but you won’t with her).

“I don’t have any connections over there (to have her trained) and I like managing things pretty tightly, so it makes sense to bring her back even though she will be six months behind.

“If she’s going to be a good horse, she will have the time to be a good horse because these boys are good, patient owners and we will be realistic that she should be a three- and four-year-old and we like that style of racing anyway.”

Her sire Violence, who stands at Hill ‘n’ Dale Farm, is the sire of 31 individual stakes winners including five at Grade 1 level.

“Violence is by Medaglia D’Oro and she looks like one of those good Medaglia fillies that are a bit square in the hindquarters, they don’t have the biggest hind end on them. They have an unusual shape, a short hindquarter with plenty of quality, good skin and good bone. She is just well marked,” Mills said.

“She reminded me of the Medaglia D’Oro fillies that I like at the (Australian) sales and those that you see at the races, particularly in the Darley system, and that is what I think this filly looks like.”

Taste Of Heaven, who was purchased by agent James Harron and Hill ‘n’ Dale Farm for $1.5 million at the 2014 Magic Millions National Broodmare Sale, has not only produced Heavenly Curlin and Mills’ filly, but she is also the dam of Paradisum (Medaglia D’Oro), a juvenile winner in Japan, and she has an unraced two-year-old named Tolede (Curlin).

She returned to Australia last year to be covered by Yarraman Park Stud sire I Am Invincible (Invincible Spirit) and was subsequently sold in foal at this year’s Magic Millions National Sale for $1.6 million to Mitchell Bloodstock.

Meanwhile, Mick Price and Michael Kent jnr, who bought six yearlings in the US last year, yesterday added to their haul with the purchase of a US$275,000 (approx. AU$374,500) War Front (Danzig) filly who is a sister to Group 1 winner Brave Anna and US Breeders’ Cup Juvenile Turf (Gr 1, 8f) winner Hit A Bomb, plus two other stakes-placed siblings.

The training partnership had already purchased a War Front colt at the Fasig-Tipton Saratoga Sale in August for US$230,000.

Consigned by Four Star Sales as Lot 46, the filly is a daughter of European Group 3 winner Liscanna (Sadler’s Wells), while her second dam is stakes winner Lahinch (Danehill Dancer).

Barry Bowditch, the Magic Millions managing director and Keeneland’s Australian representative, last week flagged the potential opportunities at the US yearling sale for southern hemisphere buyers and Mills revealed another filly had caught his eye, the Curlin (Smart Strike) filly out of Group 3 winner Thyme For Roses (Redoute’s Choice). She will be offered as Lot 918.

US agent John Moynihan went to $800,000 at the 2017 Magic Millions National Sale to purchase Thyme For Roses on behalf of Barbara Banke’s Stonestreet Stables.

Bounding (Lonhro), the New Zealand Railway Stakes (Gr 1, 1200m) winner, was also bought by Moynihan and Banke and her third foal, a Medaglia D’Oro (Lonhro) filly, was to go through as Lot 284 overnight.

Mills assessed the merits of a number of fillies but had narrowed it down to two before making his move early yesterday.

“This is the first time I have bought a yearling overseas to come down here and race,” he said.

“There were about six or seven Aussie pedigrees over there. Type wise, I liked this one and the Curlin-Thyme For Roses, but pedigree wise I thought this one was clearly top of the tree and I couldn’t wait for the other one anyway.

“I certainly thought at the money, it’s an old adage and cliche, that I think she is a free swing by the time she has finished racing and we will still have five, six and seven foals to come.

“I thought it was the right money and it made a lot of sense.”

Rosemont Stud’s Anthony Mithen yesterday confirmed Heavenly Curlin was now under the ownership of he and brother-in-law Nigel Austin after months of searching for a suitable mare to send to Juddmonte Farm’s star stallion Frankel.

Heavenly Curlin, trained by Hall Of Fame inductee Mark Casse, won the Maple Leaf Stakes (Gr 3, 10f) at Woodbine last November and ran fourth in the Trillium Stakes (Gr 3, 8.5f) in Canada in June before Johnson made a move for the mare. She won three of her eight starts for owners Gary Barber and John Oxley.

“We looked and came up short everywhere else, so it was good to secure her and get her over the line. I was a bit worried as we’ve been good supporters of Frankel. Shane Horan up there (UK), he’s the stallion nominations manager, he contacted me asking, ‘what do you think, are you breeding to southern hemisphere time this year?’” Mithen said.

“I was trying but I didn’t want to hold up a spot and by the time we secured Heavenly Curlin I went to him saying, ‘sorry I am late to the party, but I have now got a mare, what can we do?’ and he rang me and said, ‘I was preparing to let you down gently and then I looked at her pedigree and thought, we’ve just got to fit her in’.

“I was quite pleased that I got a ringing endorsement given the beautiful mares Juddmonte have and they were more than happy to find room for her.”

The Rosemont principal was thankful for agent Johnson’s diligence in sourcing the high-calibre breeding prospect for the stud.

“Will Johnson brought her to our attention, so congratulations to Will for doing his due diligence and searching high and low for opportunities that might excite Australian breeders,” he said.

“He found her up in Canada and he made it pretty easy for us to get her and we were lucky enough to be the ones able to secure her.”

Mithen, who is anxiously awaiting correspondence from Juddmonte about when the four-year-old mare will be ready to be served by Frankel, indicated Heavenly Curlin could remain in the northern hemisphere for two breeding seasons before bringing her back to Australia.

“We have been on Frankel’s bandwagon for a little while now and hopefully Rampant Lion is the horse to repay us in spades,” said Mithen.

“He looks pretty sharp, anyway, to be the earliest of early two-year-olds and he is probably not quite bred to do that. He has got a reasonably speedy female pedigree. Wild Queen, Kementari and Telperion, they are all sprinters predominantly, but Frankel seems to throw more of that mile to middle distance style of horse, doesn’t he?

“He looks pretty sharp, early and professional, so hopefully he can be what we’re looking for.”