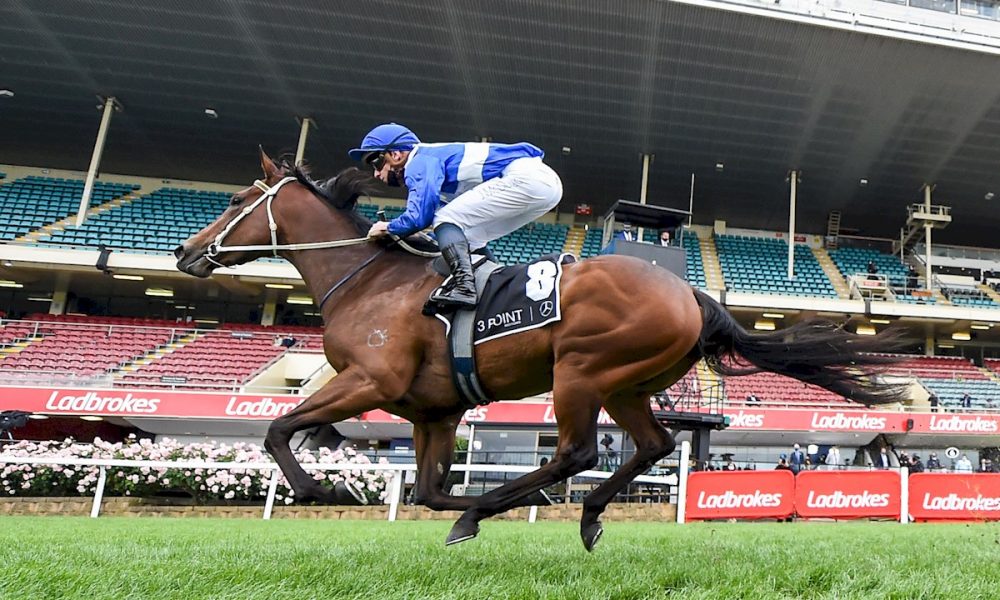 After placing in all three of her maidens without managing to get her head in front, the three-year-old homebred filly was then raised in class for three Group race assignments prior to her breakthrough.

Having initially found it tough going, the filly seemed to find plenty of improvement to run out a comfortable winner of the Group 2 at her seventh start.

Going off a $12 chance, Mokulua settled in midfield but found herself third last at the home turn.

However, she showed a scintillating turn of foot to get to the front and run away from fellow maiden filly Whatafox (Foxwedge) by two and three-quarter lengths, while Maracana (Shamexpress) also ran on well to finish a further neck behind in third.

James McDonald, who was onboard for the win, harked back to the fillies’ dam post-race, who he also rode to Furious Stakes (Gr 2, 1600m) victory for the same trainer.

“Lovely to ride a winner for Clarry in these colours,” McDonald told Racing.com. “I remember his dear filly called Dear Demi, she put me on the map and it was nice to ride a really good winner for him with a quality filly.

“Her toughness and her will to win was there. Obviously the mid-to-early stages was a bit worrying – we kept getting shuffled back.

“Her electric turn of foot really helped her out and with a bit of give in the ground she’s going to be a lovely filly in the autumn.”

In winning the race, Mokulua was also providing her veteran trainer Clarry Conners with his first Moonee Valley winner since her dam won the Stocks Stakes (Gr 2, 1600m) in September 2014.

The third foal out of Dear Demi, who is by Champion North American two-year-old Dehere (Deputy Minister), Mokulua is a full-sister to three-time Australian winner Ma And Pa, who is also owned by Strawberry Stud and is currently housed at Chris Waller’s stables. Mokulua is now likely to be given a spell following that breakthrough success.